To add to information shared on the 18th of the month, I found the following article in the Stanford newspaper.  This history of the land and home of Moses Sweeney is very interesting and detailed.  As the family were buried in the field beside their house, typical of many during this early time period, another article from October, 1934, tells of great-great-grandson, Rev. William E. Sweeney, who searched for the cemetery to add a new stone and fence the area.  Seventy years later a fifth great-grandson, Ben Sweeney, an Eagle Scout, merited this rank by renovating the grave of Moses Sweeney.  I always enjoy a member of the younger generation treating their forebears with great respect.  I applaud both Rev. and Ben Sweeney for the dedication shown to their family. 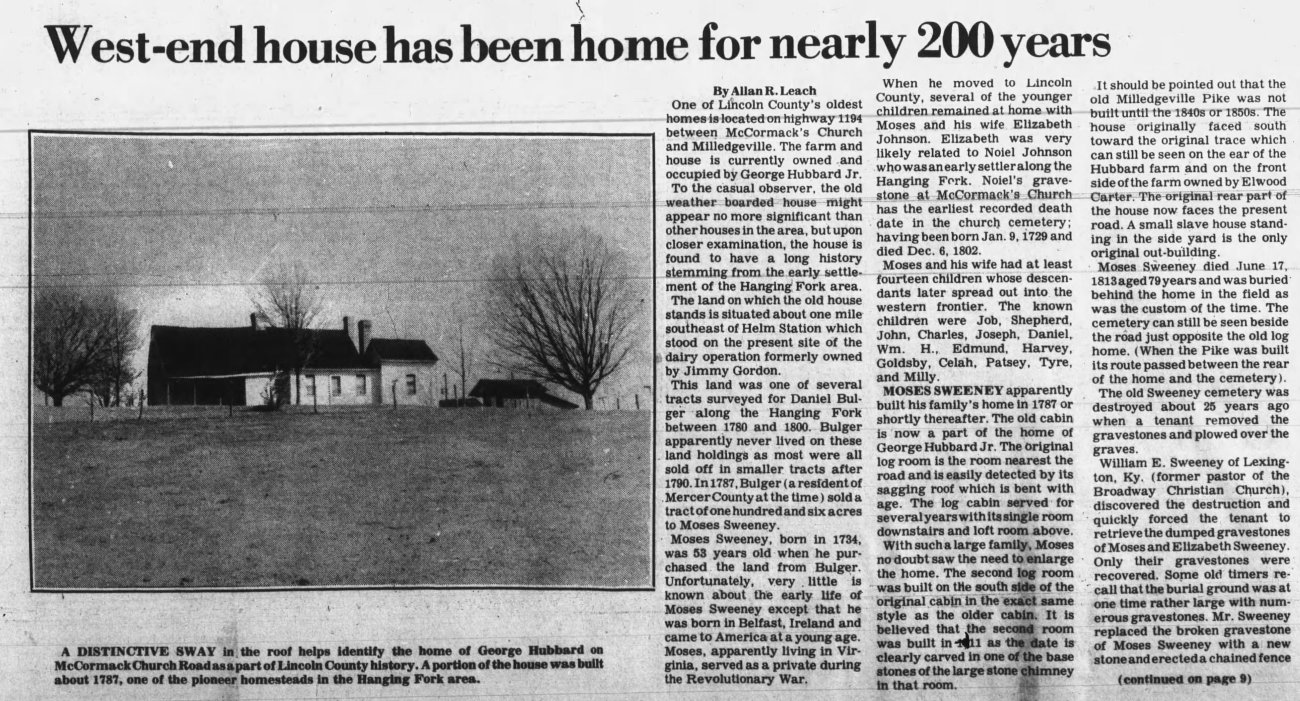 West-end house has been home for nearly 200 years

One of Lincoln County’s oldest homes is located on highway 1194 between McCormack’s Church and Milledgeville.  The farm and house are currently owned and occupied by George Hubbard, Jr.

To the casual observer, the old weather boarded house might appear no more significant than other houses in the area, but upon closer examination, the house is found to have a long history stemming from the early settlement of the Hanging Fork area.

The land on which the old house stands is situated about one mile southeast of Helm Station which stood on the present site of the dairy operation formerly owned by Jimmy Gordon.

This land was one of several tracts surveyed for Daniel Bulger along the Hanging Fork between 1780 and 1800.  Bulger apparently never lived on these land holdings as most were all sold off in smaller tracts after 1790.  In 1787, Bulger (a resident of Mercer County at the time) sold a tract of one hundred and six acres to Moses Sweeney.

Moses Sweeney, born in 1734, was 53 years old when he purchased the land from Bulger.  Unfortunately, very little is known about the early life of Moses Sweeney except that he was born in Belfast, Ireland, and came to America at a young age.  Moses, apparently living in Virginia, served as a private during the Revolutionary War.

When he moved to Lincoln County, several of the younger children remained at home with Moses and his wife Elizabeth Johnson.  Elizabeth was very likely related to Noiel Johnson who was an early settler along the Hanging Fork.  Noiel’s gravestone at McCormack’s Church has the earliest recorded death date in the cemetery; having been born January 9, 1729, and died December 6, 1802.

Moses Sweeney apparently built his family’s home in 1787 or shortly thereafter.  The old cabin is now a part of the home of George Hubbard, Jr.  The original log room is the room nearest the road and is easily detected by its sagging roof which is bent with age.  The log cabin served for several years with its single room downstairs and loft room above.

With such a large family, Moses no doubt saw the need to enlarge the home.  The second log room was built on the south side of the original cabin in the exact same style as the older cabin.  It is believed that the second room was built in 1811 as the date is clearly carved in one of the base stones of the large stone chimney in that room.

It should be pointed out that the old Milledgeville Pike was not built until the 1840’s or 1850’s.  The house originally faced south toward the original trace which can still be seen on the rear of the Hubbard farm and on the front side of the farm owned by Elwood Carter.  The original rear part of the house now faces the present road.  A small slave house standing in the side yard is the only original out-building.

Moses Sweeney died June 17, 1813, aged 79 years and was buried behind the home in the field as was the custom of the time.  The cemetery can still be seen beside the road just opposite the old log home  (when the Pike was built its route passed between the rear of the home and the cemetery.).

The old Sweeney Cemetery was destroyed about 25 years ago when a tenant removed the gravestones and plowed over the graves.

William E. Sweeney of Lexington, Kentucky (former pastor of the Broadway Christian Church), discovered the destruction and quickly forced the tenant to retrieve the dumped gravestones of Moses and Elizabeth Sweeney.  Only their gravestones were recovered.  Some old timers recall that the burial ground was at one time rather large with numerous gravestones.  Mr. Sweeney replaced the broken gravestones of Moses Sweeney with a new stone and erected a chain fence

around the replaced stones.  Mr. Sweeney died several years ago and neglect has once again ruined the gravesite of this old pioneer and soldier.  The chains were stolen and groundhogs have taken their toll on the little burial plot.

In 1825, Moses Sweeney’s widow and son John sold the one hundred and six acres to George Helm.  Elizabeth is believed to have moved to Casey County at this time to live with one of her children.  Several of the Sweeney children were some of the earliest settlers in Casey County and many of their descendants are still to be found in that county.  Several well-known doctors and other professional people were produced from this family.

After George Helm bought the homestead in 1825, the farm was bought by Robert Elder who, along with the Helms, Carters, McCormacks, Alcorns and Eppersons, was a neighbor of Moses Sweeney.  Robert Elder, a Revolutionary soldier, is buried at McCormack’s Church.  The farm remained in the Elder family for many years and it is quite likely some of the family was buried in the old Sweeney burial lot.

The old home, long known as the Elder place, was bought in 1903 by the grandparents of George Hubbard, Jr., and it has been in the Hubbard family since that time.  The old log house has changed little since the days of Moses Sweeney, only two rooms have been added to the original structure.  The large mantel remains in the newer log section and the original chimney is still the main source of heat in the house.  After nearly two hundred years of continuous occupancy, the old Sweeney home is in a fine state of preservation.

Today, the passerby with the sharp eye will quickly spot the family greeting on the mailbox: “Hubbard’s Cubbard”.  In this modern age it is good to see the old things of the past preserved.  Indeed, some things are just better left unchanged.  The old Sweeney home, with its quaintly sagging roof, is a landmark which is worthy of continued preservation; standing as it has for over one hundred and ninety years. 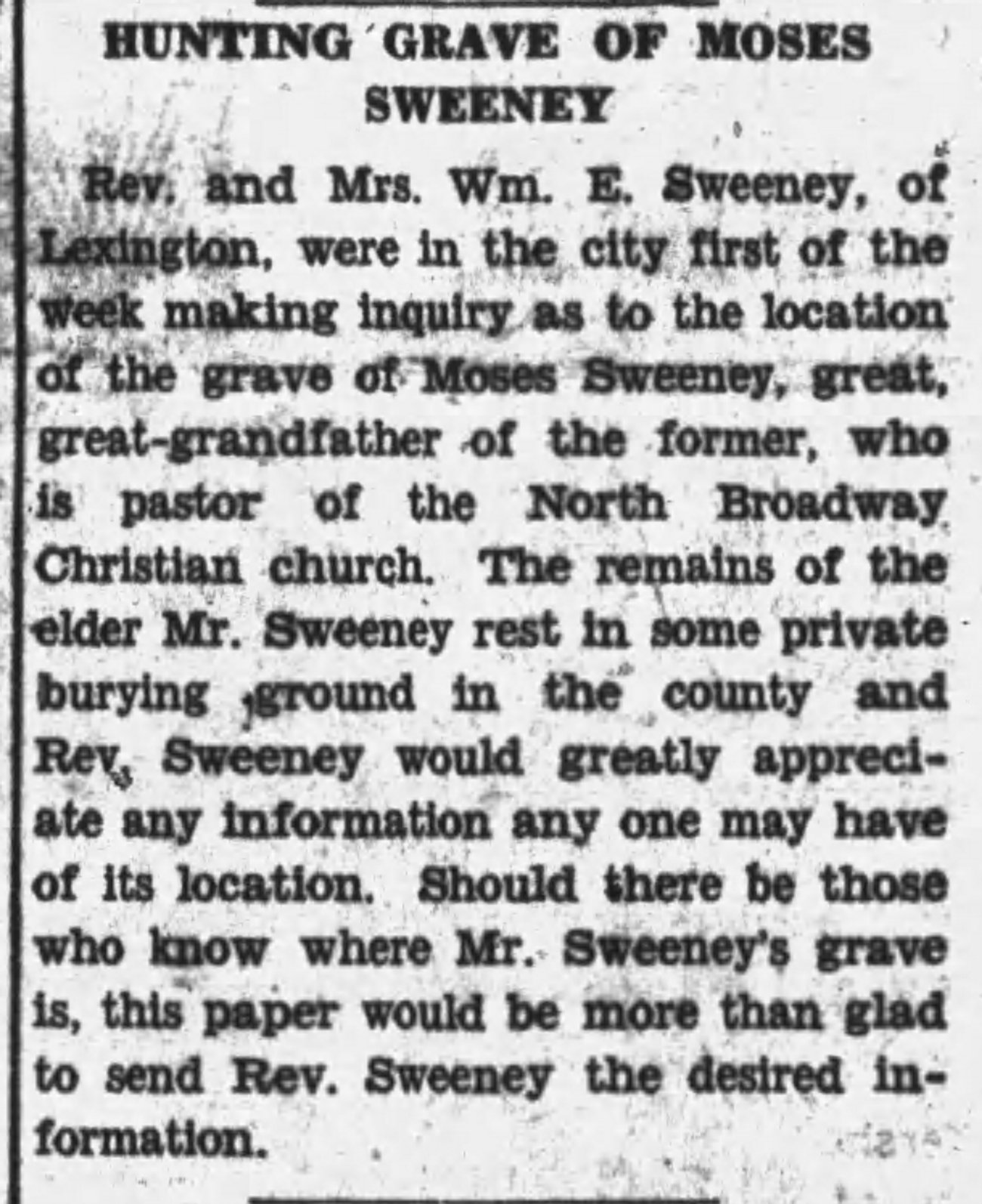 Rev. and Mrs. Wm. E. Sweeney, of Lexington, were in the city first of the week making inquiry as to the location of the grave of Moses Sweeney, great-great-grandfather of the former, who is pastor of the North Broadway Christian Church.  The remains of the elder Mr. Sweeney rest in some private burying ground in the county and Rev. Sweeney would greatly appreciate any information any one may have of its location.  Should there be those who know where Mr. Sweeney’s grave is, this paper would be more than glad to send Rev. Sweeney the desired information.

Ben Sweeney, son of Don and Pam Sweeney, completed requirements for Eagle Scout under the guidance of Scoutmaster John Shugars of Boy Scout Troup 123.  Sweeney chose to renovate the gravesite of his fifth great-grandfather, Moses Sweeney, an early pioneer who served in the American Revolution.  Moses Sweeney came to the wilderness through the Cumberland Gap and settled in what now is Lincoln County.  He built two log cabins in 1787 and 1811 on McCormick’s Church Road near Moreland.  The 1811 cabin was later enclosed and became known as the Hubbard House.

The gravesite is across the road from the home site.  It fell in poor condition after a renovation in the mid-1900’s.  Ben Sweeney along with fellow Scouts, family and friends cleared the site, cleaned and righted the headstones, and erected a new fence around the cemetery.  The only known grave there is that of Moses who died in 1813.  There are other unmarked graves that may have been other family members.

A ceremony will be scheduled for the presentation of the Eagle Scout honor.

Sweeney is the grandson of Leroy and Mary Johnson of Danville and Dr. Garnett J. and Virginia Sweeney of Liberty.