With a search in newspapers for ‘pioneer family’ I found the following article on families from Lincoln and Garrard Counties.  Mr. Harry W. Mills, who wrote this article, and others in subsequent weeks, gives an interesting introduction of his beginning for the search for his Logan family.  This is what we all do – gather information that others found in earlier years, and build on that information to flesh out our family tree.  I think this is a most important aspect of genealogy – the sharing of information.  I do know a few people who tend to keep their information for their personal use.  But if we all did that think how long it would take us to sift through all old records and books.  And since all family information is not publicized, personal records such as family stories, Bible records, old letters, etc., would only be known to the person holding them.  This includes photographs.  The photo, letter, story, etc., is not just for you.  Think of all the other descendants of that ancestor that would love to read the letter, look at the photo and try to imagine what life was like for this particular person.  I certainly subscribe to sharing information – anything I have.  It is not just for me it is for everyone.  All through my almost 50 years of genealogy research I remember all the help I received along the way, men and women I’ve collaborated with and shared information.  Such close friendships lasted many years – some until death.  Genealogy isn’t just a pile of old papers, names and dates.  It’s about the journey, who you take that journey with and where it takes you. 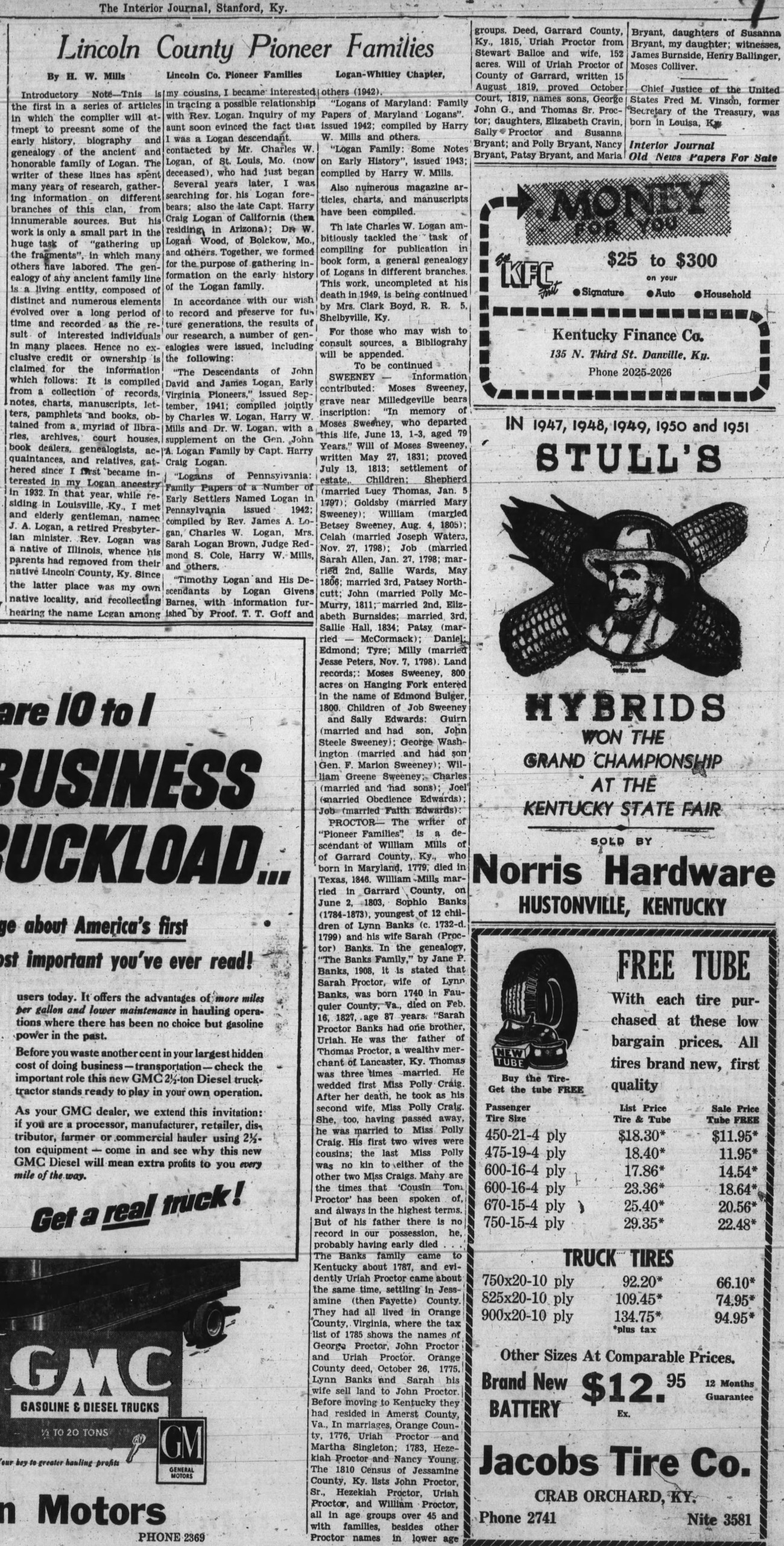 Introductory Note – This is the first in a series of articles in which the compiler will attempt to present some of the early history, biography and genealogy of the ancient and honorable family of Logan.  The writer of these lines has spent many years of research, gathering information on different branches of this clan, from innumerable sources.  But his work is only a small part in the huge task of “gathering up the fragments,” in which many others have labored.  The genealogy of any ancient family line is a living entity, composed of distinct and numerous elements evolved over a long period of time and recorded as the result of interested individuals in many places.  Hence no exclusive credit or ownership is claimed for the information which follows: It is compiled from a collection of records, notes, charts, manuscripts, letters, pamphlets and books, obtained from a myriad of libraries, archives, court houses, book dealers, genealogists, acquaintances, and relatives, gathered since I first became interested in my Logan ancestry in 1932.  In that year, while residing in Louisville, Kentucky, I met an elderly gentleman, named J. A. Logan, a retired Presbyterian minister.  Rev. Logan was a native of Illinois, whence his parents had removed from their native Lincoln County, Kentucky.  Since the latter place was my own native locality, and recollecting hearing the name Logan among my cousins, I became interested in tracing a possible relationship with Rev. Logan.  Inquiry of my aunt soon evinced the fact that I was a Logan descendant.  I was contacted by Mr. Charles W. Logan, of St. Louis, Missouri (now deceased), who had just begun his research.

Several years later, I was searching for his Logan forebears; also, the late Captain Harry Craig Logan of California (then residing in Arizona); Dr. W. Logan Wood, of Bolckow, Missouri, and others.  Together, we formed for the purpose of gathering information on the early history of the Logan family.

In accordance with our wish to record and preserve for future generations, the results of our research, a number of genealogies were issued, including the following:

“Timothy Logan and His Descendants by Logan Givens Barnes, with information furnished by Prof. T. T. Goff and others (1942).

“Logans of Maryland: Family Papers of Maryland logans”, issued 1942; compiled by Harry W. Mills and others.

Also, numerous magazine articles, charts and manuscripts have been compiled.

The late Charles W. Logan ambitiously tackled the task of compiling for publication book form, a general genealogy of Logans in different branches.  This work, uncompleted at his death in 1949, is being continued by Mrs. Clark Boyd, R. R. 5, Shelbyville, Kentucky.

For those who may wish to consult sources, a bibliography will be appended. 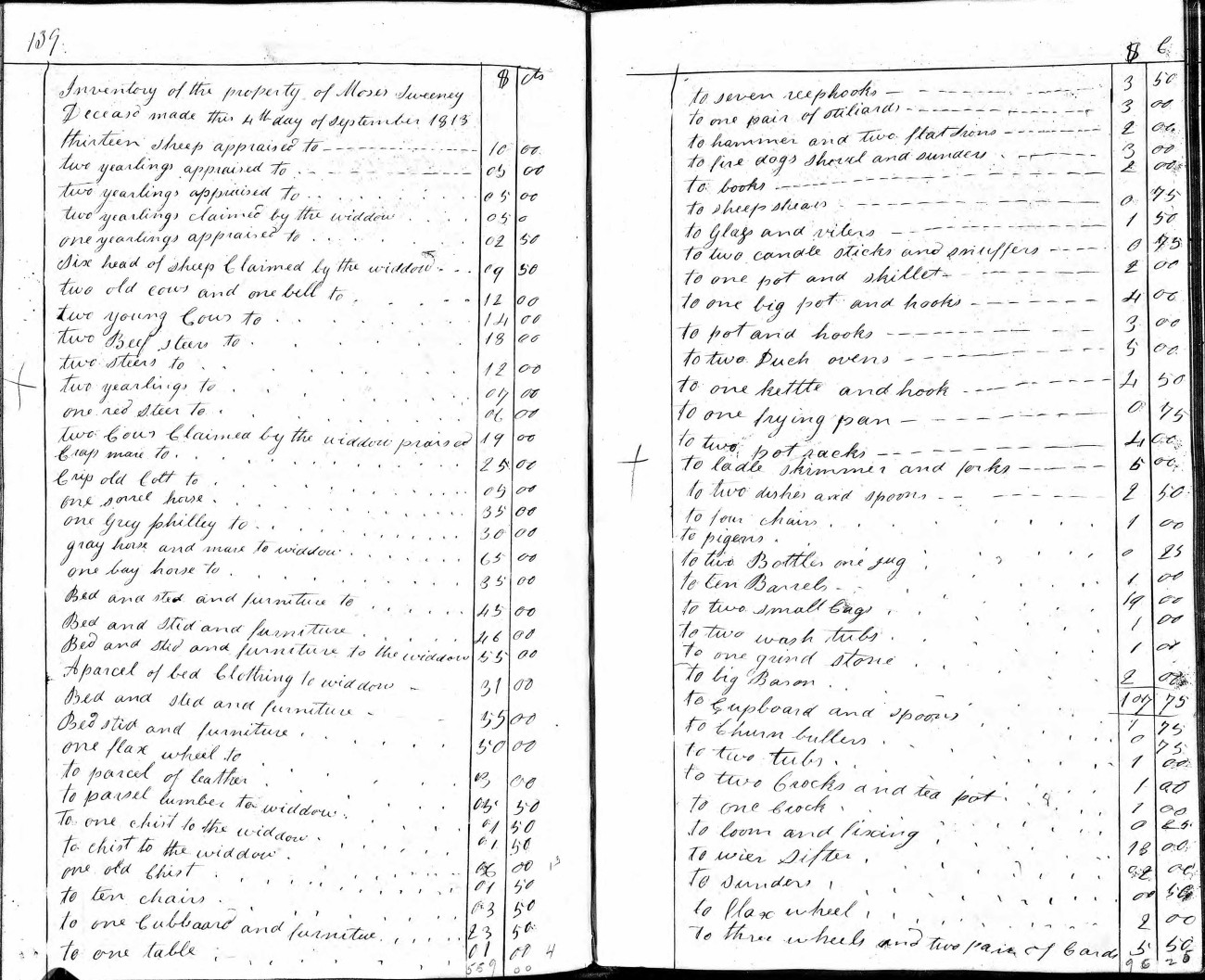 Inventory of the property of Moses Sweeney, deceased, made this 4th day of September 1813. 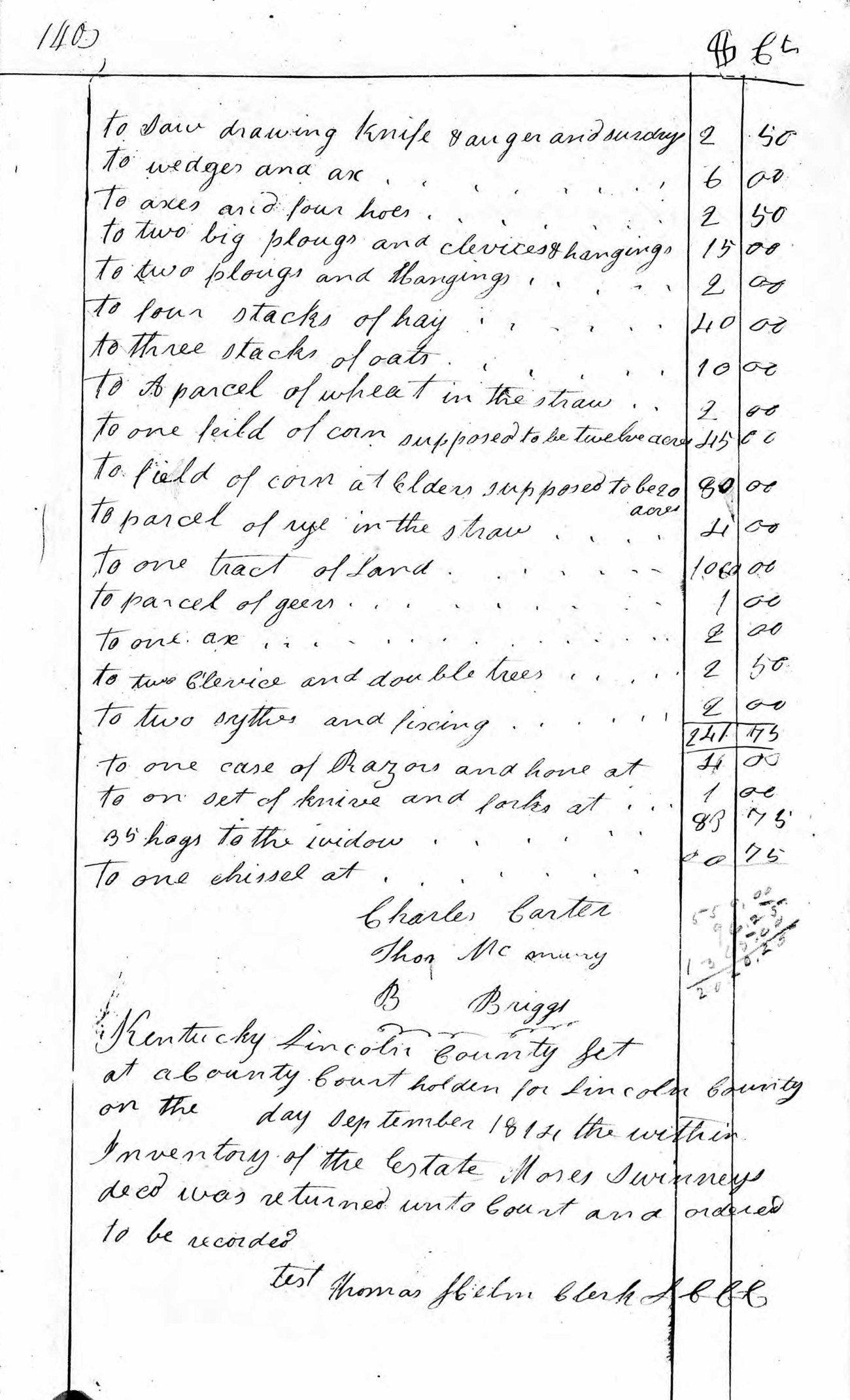 Proctor – The writer of “Pioneer Families” is a descendant of William Mills of Garrard County, Kentucky, who was born in Maryland, 1779, died in Texas, 1846.  William Mills married in Garrard County, on June 2, 1803, Sophia Banks (1784-1873), youngest of 12 children of Lynn Banks (c. 1732-1799) and his wife Sarah (Proctor) Banks.  In the genealogy, “The Banks Family,” by Jane P. Banks, 1908, it is stated that Sarah Proctor, wife of Lynn Banks, was born 1740 in Fauquier County, Virginia, died on February 16, 1827, aged 87 years.  “Sarah Proctor Banks had one brother, Uriah.  He was the father of Thomas Proctor, a wealthy merchant of Lancaster, Kentucky.  Thomas was three times married.  He wedded first Miss Polly Craig.  After her death he took as his second wife, Miss Polly Craig.  She, too, having passed away, he was married to Miss Polly Craig.  His first two wives were cousins; the last Miss Polly was no kin to either of the other two Miss Craigs.  Many are the times that “Cousin Tom Proctor” has been spoken of, and always in the highest terms.  But of his father there is no record in our possession, he, probably having early died.  The Banks family came to Kentucky about 1787, and evidently Uriah Proctor came about the same time, settling in Jessamine (then Fayette) County.  They had all lived in Orange County, Virginia, where the tax list of 1785 shows the names of George Proctor, John Proctor and Uriah Proctor.  Orange County deed, October 26, 1775, Lynn Banks and Sarah his wife sell land to John Proctor.  Before moving to Kentucky, they had resided in Amherst County, Virginia.  In marriages, Orange County, 1776, Uriah Proctor and Martha Singleton; 1783, Hezekiah Proctor and Nancy Young.  The 1810 Census of Jessamine County, Kentucky, lists John Proctor, Sr., Hezekiah Proctor, Uriah Proctor and William Proctor, all in age groups over 45 and with families besides other Proctor names in lower age groups.  Deed, Garrard County, Kentucky, 1815, Uriah Proctor from Stewart Balloe and wife, 152 acres.  Will of Uriah Proctor of Garrard, written 15 August 1819, proved October Court, 1819, names sons, George, John G., and Thomas Sr. Proctor; daughters Elizabeth Cravin, Sally Proctor and Susanna Bryant; and Polly Bryant, Nancy Bryant, Patsy Bryant and Maria Bryant, daughters of Susanna Bryant, my daughter; witnesses, James Burnside, Henry Ballinger, Moses Collier. 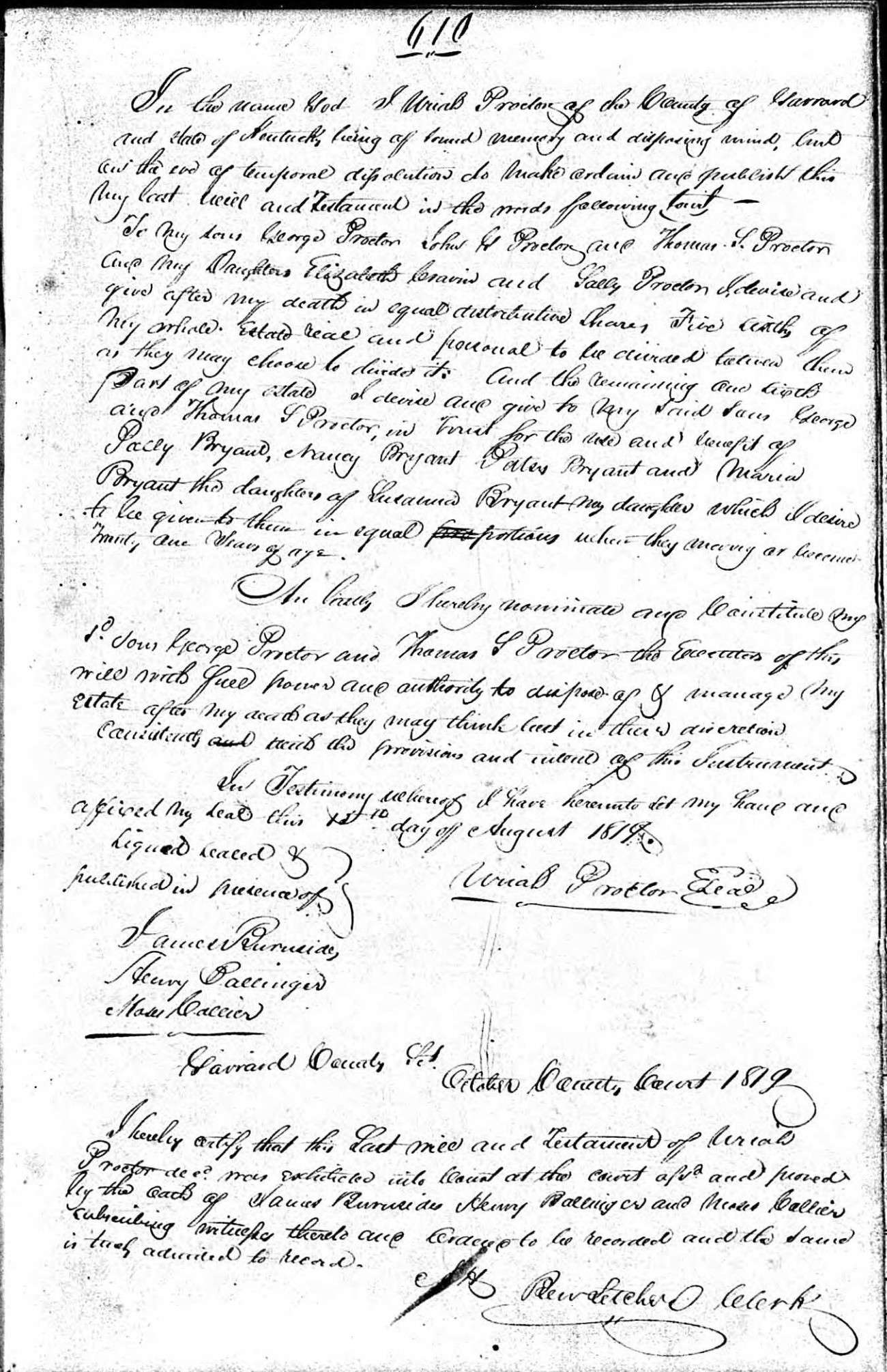 Will of Uriah Proctor

In the name of God, amen.  I, Uriah proctor, of the County of Garrard and State of Kentucky, being of sound memory and disposing mind, but on the eve of temporal dissolutions, do make, ordain and publish this, my last will and testament in the words following, to wit:

To my sons George Proctor, John H. Proctor and Thomas L. Proctor, and my daughters Elizabeth Cravin and Sally Proctor, I devise and give after my death in equal distributive shares five sixths of my whole estate, real and personal, to be divided between them as they may choose to divide it.  And the remaining one sixth part of my estate I devise and give to my said sons George and Thomas L. Proctor, in trusts for the use and benefit of Polly Bryant, Nancy Bryant, Patsy Bryant and Maria Bryant, the daughters of Susanna Bryant, my daughter, which I desire to be given to them in equal portions when they marry or become twenty-one years of age.

And lastly, I hereby nominate and constitute my said sons George Proctor and Thomas L. Proctor, the executors of this will with free power and authority to dispose of and manage my estate after my death as they may think best in their discretion, consistent with the provisions and intent of this instrument.

In testimony whereof, I have hereunto set my hand and affixed my seal this 15th day of August 1819.

I hereby certify that this last will and testament of Uriah Proctor, deceased, was exhibited into court at the court aforesaid and proved by the oath of James Burnside, Henry Ballinger and Moses Collier, subscribing witnesses thereto and ordered to be recorded and the same is truly admitted to record.