By Kentucky Kindred Genealogical Research on February 13, 2021 • ( Leave a comment )

Killed During the War in Kentucky in Butler County

A recent issue of the National Tribune contains an account of the first clash of arms between the federals and confederates in the civil war in Kentucky, which occurred near Morgantown, Kentucky, on October 29, 1861.  The account is from the pen of Col. Edwin Forbes, of Fordsville, and is as follows:

Early in the morning of October 29, 1861, Col. McHenry with Companies A and D crossed Green River and marched to a hill on the Morgantown Road.  Having been informed that a rebel scouting party advanced to that point every morning, the colonel disposed his squadron for battle.  We had not been long in position when the rebels appeared.  Seeing us, they charged forthwith, galloping pel-mell and giving full vent to their peculiar war-cry, then unfamiliar to us.  Undismayed we steadfastly held our grounds, refusing to evacuate the hill when the charging rebels delivered their fire.  Waiting until they had come within close range, we fired a deadly volley that emptied a number of saddles.  Retreating hastily, the enemy left arms and equipments strewn along the road, which was profusely sprinkled with blood.  We followed them to Morgantown, and were told by citizens that the retreat was a wild disorderly rout.  We lost one man, killed – Granville C. Allen.

“On the 28th of October, 1861, I crossed the Green River with two companies of my regiment, expecting to attack a cavalry outpost stationed at Woodbury.  We encountered a scouting party near Morgantown, and exchanged shots with them.  One of our party, Granville Crawford Allen, was killed outright.  This was the first clash of arms, and Allen was the first Union soldier killed on Kentucky soil.”

Allen belonged to Co. D and appeared to be about 25 years old.  When I saw him dead on that little battlefield the radiant glow of youth was still on his face, not yet darkened by the shadow of death. 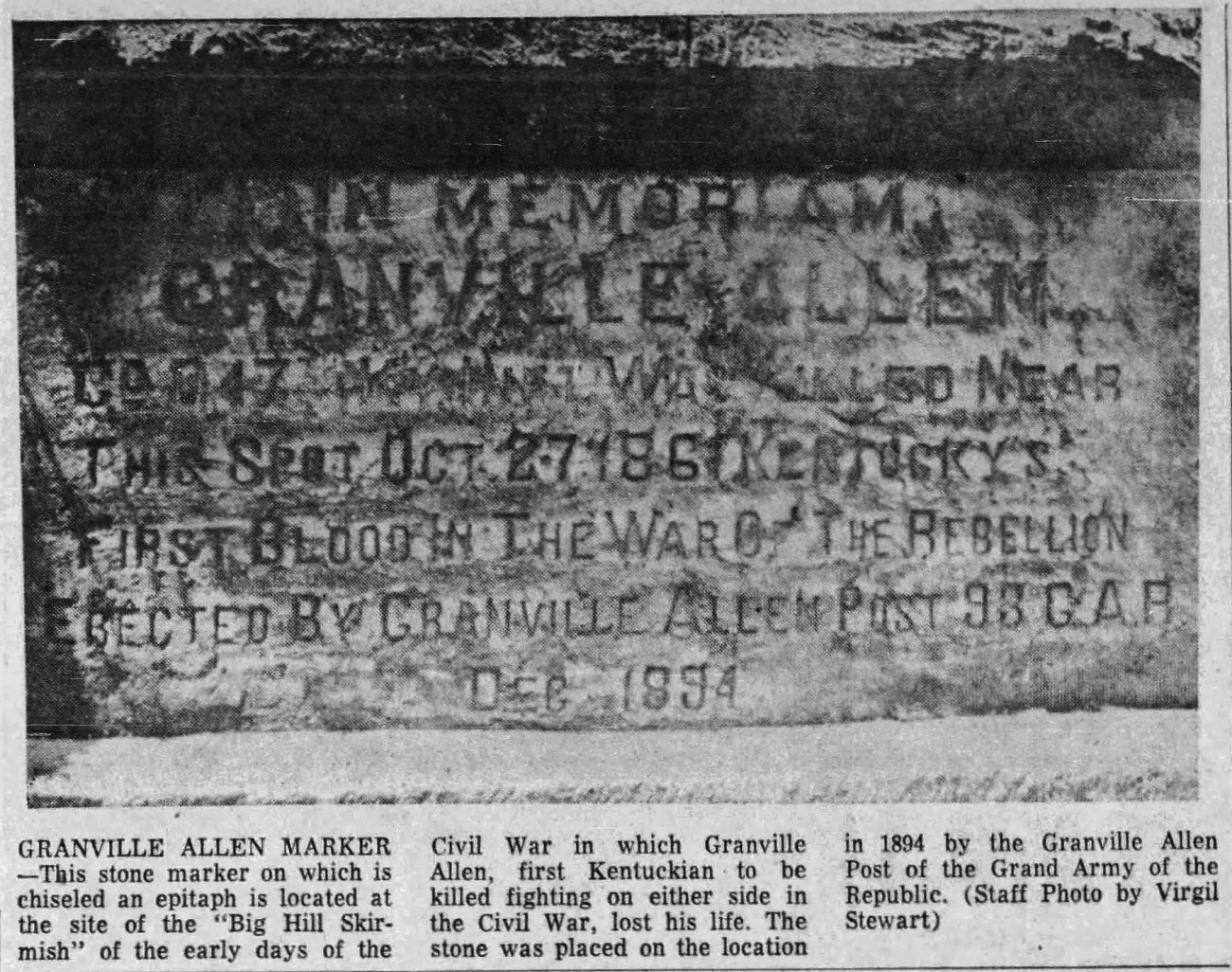 On May 30, 1889, I assisted in the decoration of Allen’s grave and those of some of his comrades, only a few miles northwest of the hill where Comrade Allen fell.  No monuments mark the graves – nothing but rough stones on which are scratched the names of the dead soldiers. – Edwin Forbes, Co. A, 17th Ky., Fordsville, Kentucky. 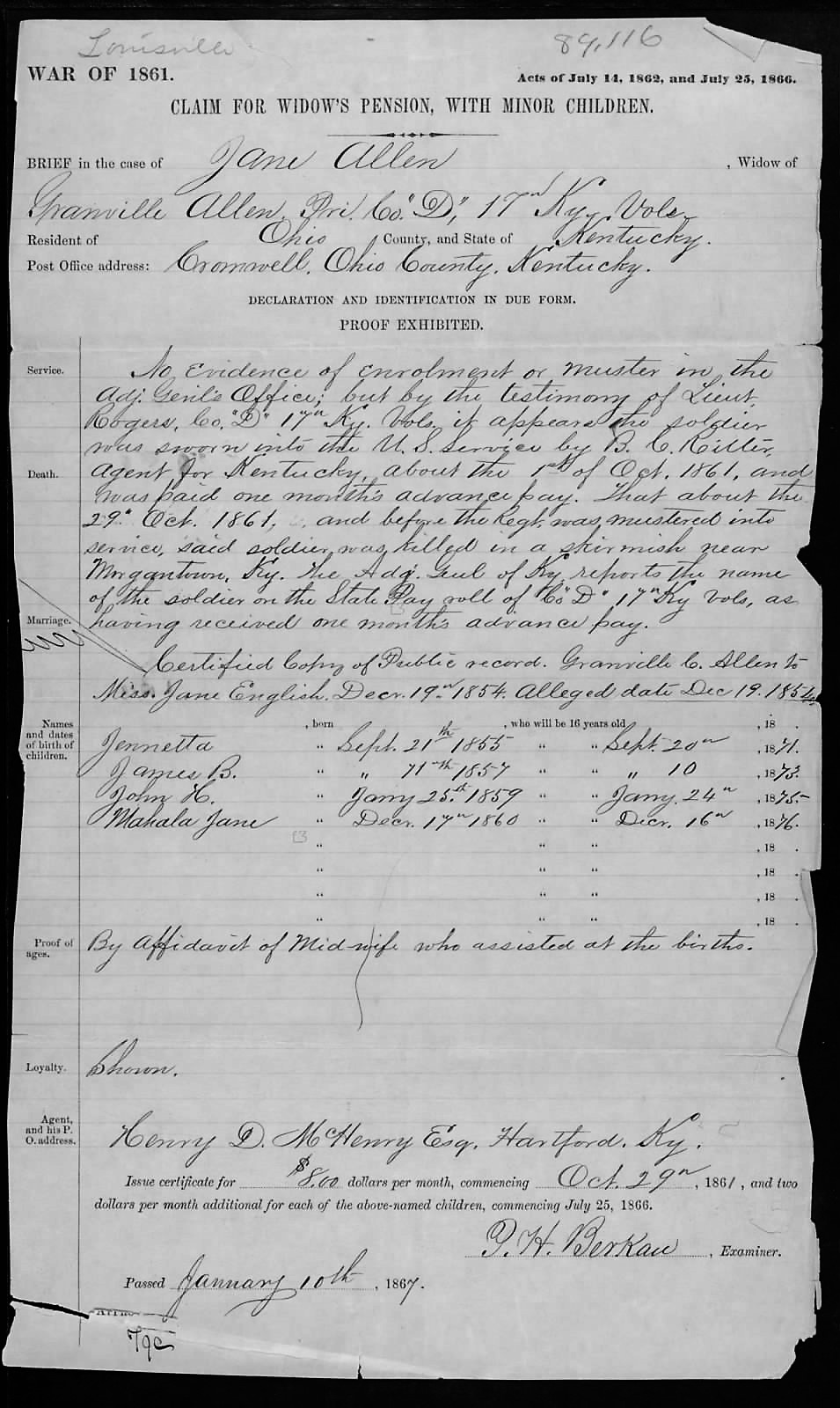 In searching for information on Private Granville Crawford Allen I found 63 pages of information stored in Civil War records.  From this information is gleaned that although Private Allen does not appear on any rolls, since his death occurred so early in the war, the Adjutant General reports that Granville C. Allen of Co. D, 17th KY Infantry, received one month’s advance pay from October 24, 1861 to November 24, 1861.  There is no evidence of the date of his enrollment or muster into service on file.  By testimony of Lieutenant Rogers, Co. D, 17th Ky. Infantry Volunteers, it seems that Granville Allen was sworn into the service by B. C. Ritter, agent for Kentucky, about the first of October 1861, and was paid one month’s advance pay.  That about the 29th of October 1861, before the regiment was mustered into service, said soldier was killed in a skirmish near Morgantown, Kentucky. 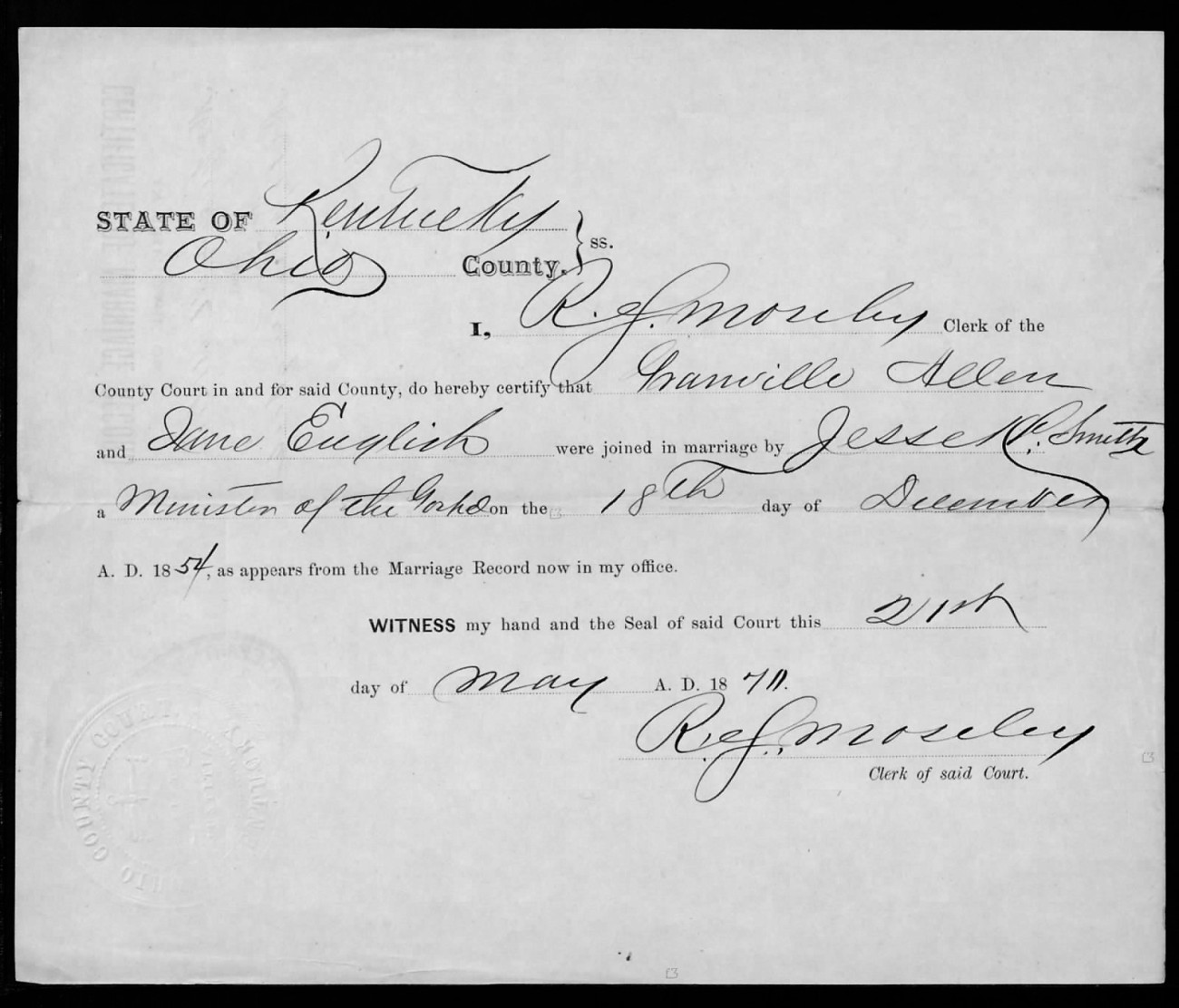 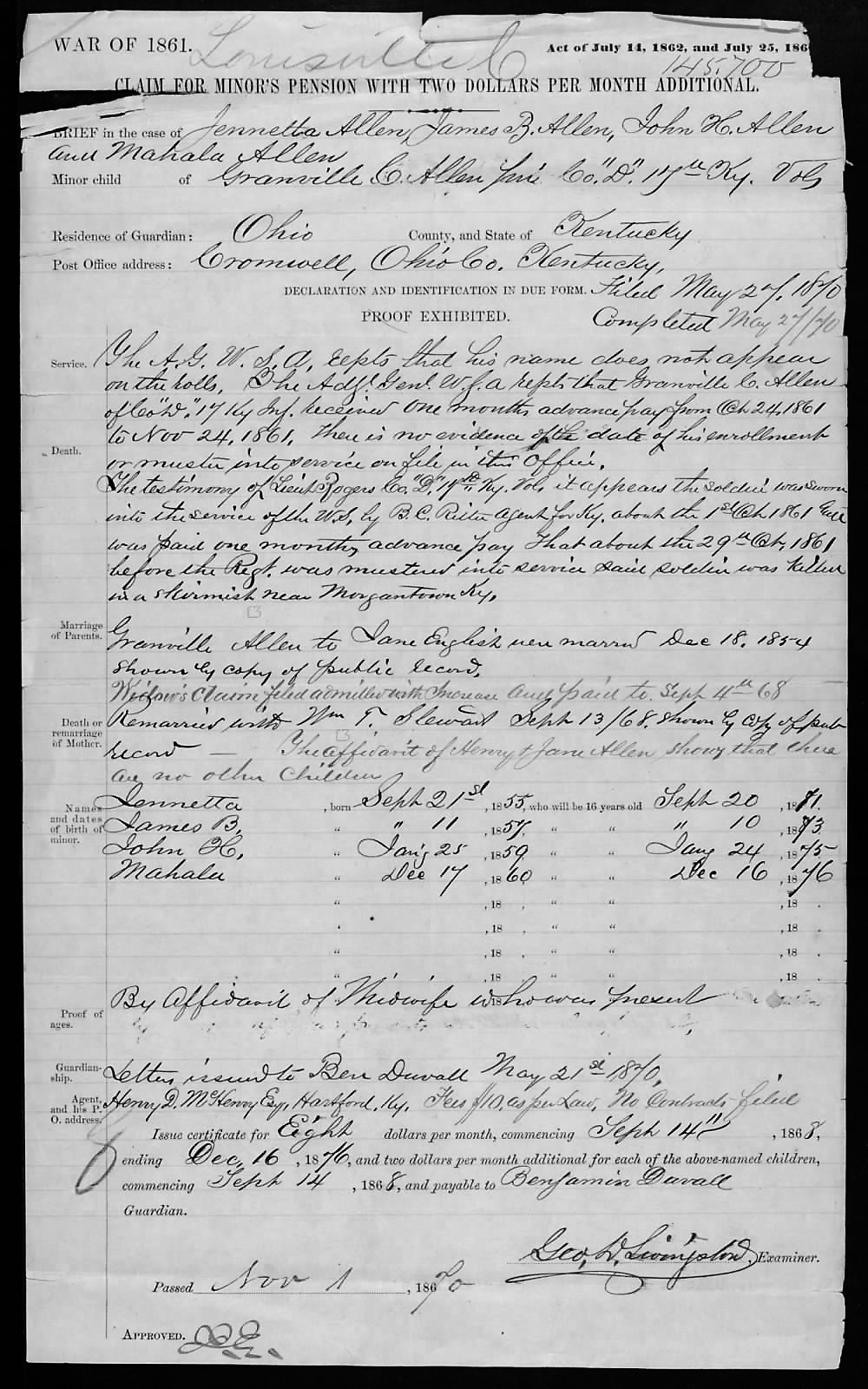 The oldest was only six years of age when her father was killed.  They, through their mother, received a children’s pension of $2 per month for each minor child, until they reached the age of sixteen years.  Jane’s widow’s pension paid $8 per month, which with the children’s $2 each gave a total of $16 per month for the family.  In today’s money this would be about $414 – not much to raise four children either in 1862 or 2021.  Jane English Allen married R. H. Miller September 13, 1868, in Ohio County.

According to one newspaper article, Granville Allen was one of four sons who saw service during the civil war.  Two were killed, two lived to make it home.  It is said that Granville was and several comrades were hiding in a hollow chestnut tree, waiting for the confederate unit.  He stepped out just as they rode into the clearing, being the first Kentucky victim of the war.