Daguerreotype, Ambrotype and Tintype – What Kind of Photograph Do You Have?

Yesterday I brought out my old photographs in wood and leather cases, lined with red velvet – photographs taken of several of my 3rd and 4th great-grandparents, and assorted aunts and uncles.  I have looked at these photographs many times, but I was determined to learn more about them. 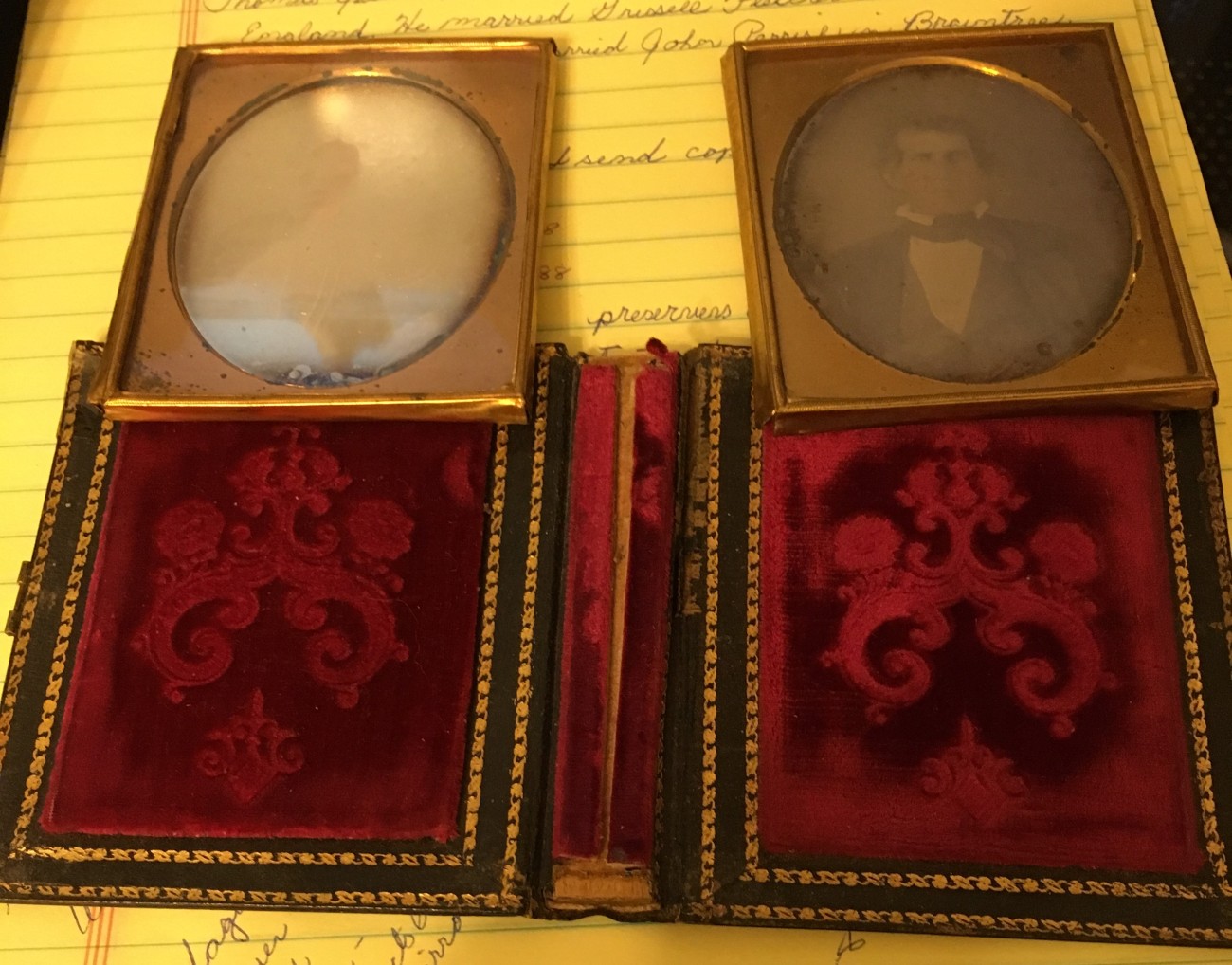 The oldest of my photographs are two daguerreotypes – photos of John Edwards and his wife, Milly Linton Edwards, my fourth great uncle and aunt.  John was a brother to Susan Clark Edwards, my 3rd great-grandmother.  This couple is buried in the Linton Cemetery in Washington County, along with Captain John Linton and other family members.

An easy way to tell if your photograph is a daguerreotype is to move it side to side – this particular type of photo has a reflection like a mirror when moved from side to side.  The photos are in a double case that folds to look like a modern photo album, lined with red velvet.

The case is made of leather and has mother-of-pearl in-lay on the front.  On the spine is gold filigree with the word ‘Memento’.

It must have been rather expensive to have such nice photos and a case of this caliber.  John Edwards was the eldest son, and he and Nancy had only one daughter.  Perhaps this gave them an advantage for purchasing extras. 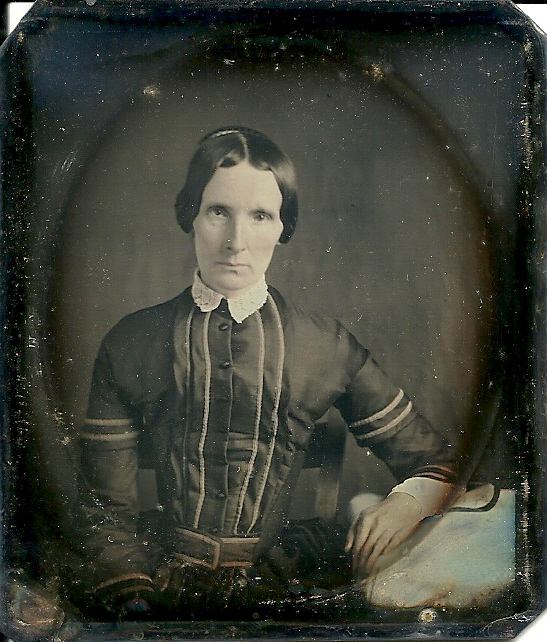 I believe this photo to be taken during the 1840’s – possibly about 1848.  It was a period not only of modesty, but included a popular trend toward extreme bodily constriction.  I think Milly looks very uncomfortable in her dress – notice the extremely tiny waist – how could she breathe? In the photo below you can see the chair slats and wall – and tell just how small that waist was!

The corset she wears makes the bosom and stomach very flat.  I removed the photos from their case to get a good scan.  You can see markings from the oval mat. 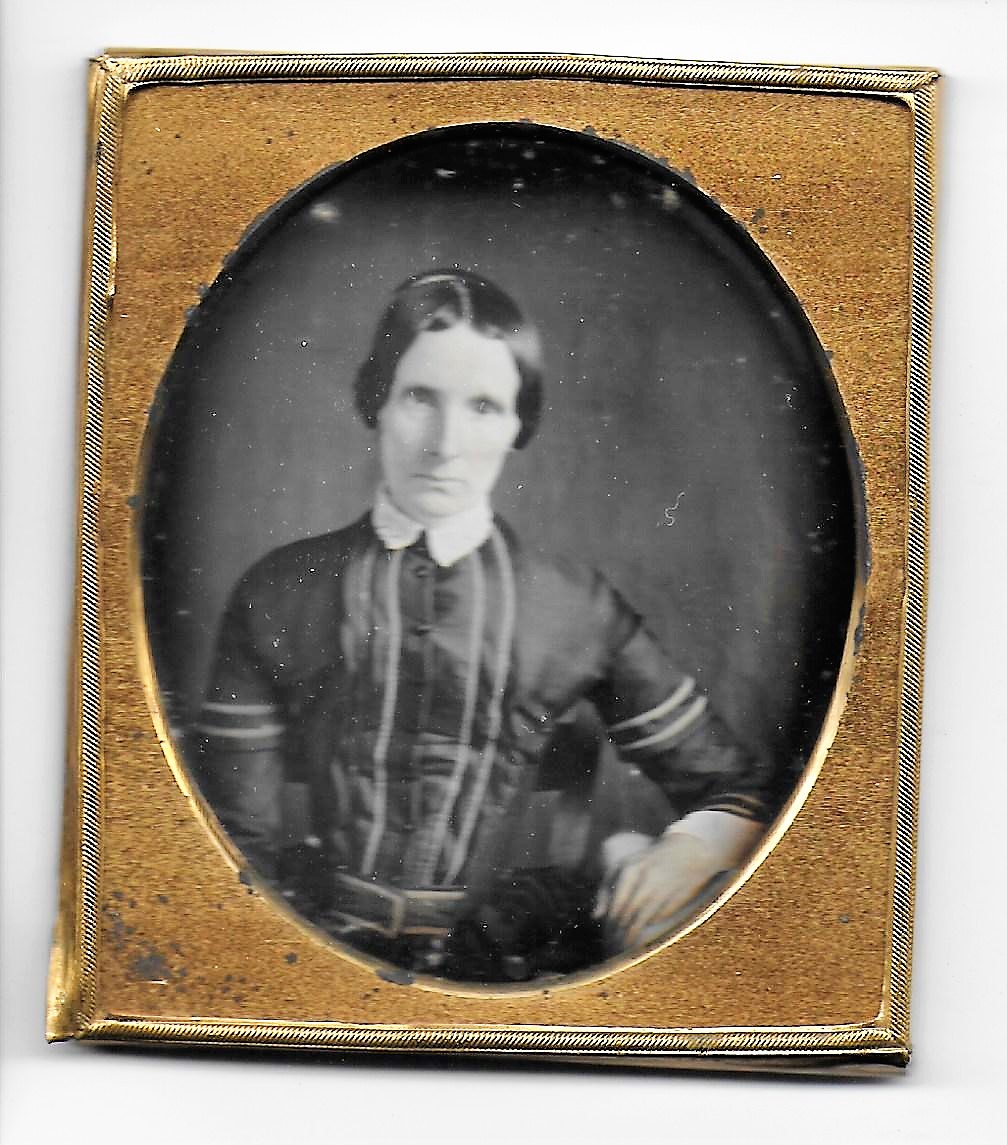 There are four parts to each daguerreotype photo (apart from the case) – the daguerreotype plate, brass mat, cover glass and preserver (the thin, foil-like frame that holds all pieces together).  The oval brass mat is made from a heavy, stiff brass, with an inside bevel and a sandy texture, which can be dated from 1846 to 1850.  The preserver, the ‘frame’ around the edges wraps all the pieces together.  Preservers did not appear until 1847.  This simple one, with just slight notches on the sides, was used from 1847 to 1850.  Later they became more decorative.

John’s photo is of a very robust, tall, healthy man with broad shoulders – with wild hair!  Look at his eyes in this photo – quite vivid from so many years ago!  His white collar, just a hint turned down over his tie, is indicative of the 1840’s, as is his soft necktie, tied in a knot.  Do you notice just a hint of tinting – especially on his cheeks – but very well done.  Some tinting looks like a child colored on the photo!