It is quite possible that William Stewart was one of the victims of the Battle of Blue Licks.  He was listed as one of the privates killed, as well as one of his witnesses, Francis McBride.  Clough Overton, another witness, was a captain for this mission, and he, too, died August 19, 1782.  As mentioned in the court records below, only one of the three subscribing witnesses was alive to prove this will.

From the inventory of William Stewart, we can tell he is a single man, no mention of dishes, furniture or other household inventory.  He does not seem to be your average Kentuckian with his wardrobe.  He must have been a man of means, with the number of waistcoats, buckles, handkerchief, stockings, linen shirts, clothes brush, geographical book, etc., that are mentioned.

Terribly sad that he died at such a young age. 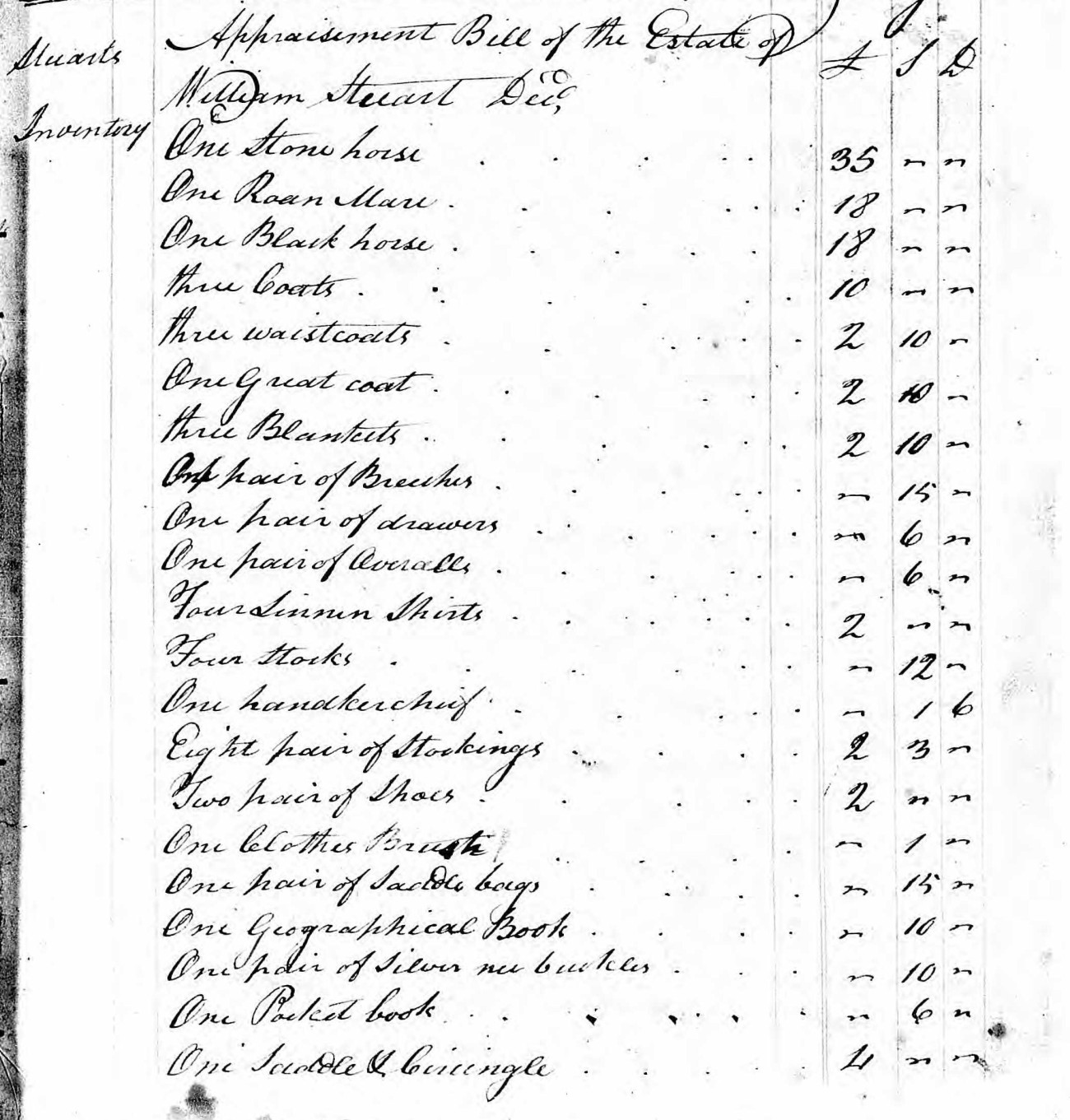 At a Court held for Lincoln County 19th March 1783

This inventory and appraisement was returned to Court and ordered to be recorded.

The Will of William Stewart

In the name of God, amen.  The twenty-fifth day of August 1781.  I, William Stewart of Lincoln County and Commonwealth of Virginia, yeoman, being of perfect health, mind and memory, thanks be give to God therefore, calling unto mind the mortality of my body and knowing that it is appointed for all men once to die, do make and ordain this my last will and testament, that is, today, principally and first of all I give and bequeath my soul into the hands of almighty God that gave it and my body I recommend to the Earth to be buried in decent Christian burial at the direction of my executors, nothing doubting but at the resurrection I shall receive the same again by the mighty power of God, and as touching such worldly estate wherewith it hath pleased God to bless me in this life I give, devise and dispose of the same in the following manner and form.

Imprimis.  I give and bequeath unto my well-beloved father two certain tracts of land on the north side of Kentucky containing two thousand four hundred acres, one tract known by the name of the Trough Spring on the head of Glen’s Creek, the other adjoining as will more fully appear by the records in the surveyor’s office.

Imprimis.  I give unto my beloved brother, Robert Stewart, the sum of five pounds lawful money of the Commonwealth of Virginia, to be paid out of my estate.

Item.  I give and bequeath unto my well-beloved sisters Hanna and Mary all and singular my estate not already bequeathed to be equally divided between them, the said Hanna and Mary, and I do hereby constitute and appoint James Hunter, John Smith and William McBride, Executors, of this my last will and testament and I do hereby utterly disallow, revoke and disapprove all and every other former testaments, wills, legacies and bequests and Executors by me in any will before named, willed and bequeathed.  Ratifying and confirming this and no other to be my last will and testament in witness whereof I have hereunto set my hand and seal the day and year above written.

Signed, sealed and declared by the said William Stewart as his last will and testament in presence of us the subscribers – N.B. the word Executors underlined before signing.

This instrument of writing was submitted in Court as the last will and testament of William Stewart, deceased, and proved by the oath of Ebenezer Miller, the only surviving witness and ordered to recorded.