By Kentucky Kindred Genealogical Research on July 28, 2018 • ( Leave a comment ) 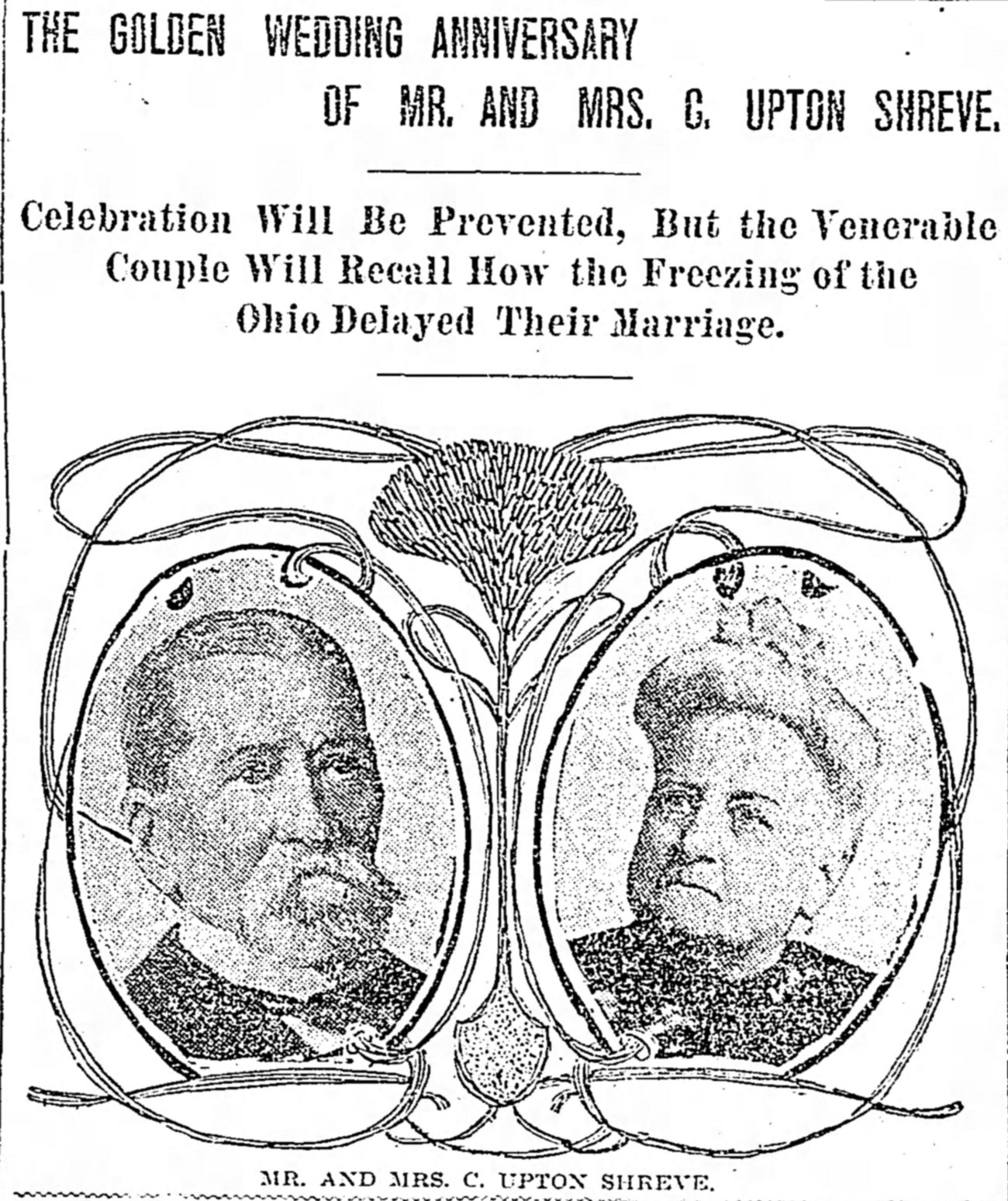 Celebration Will Be Prevented, But the Venerable Couple Will Recall How the Freezing of the Ohio Delayed Their Marriage 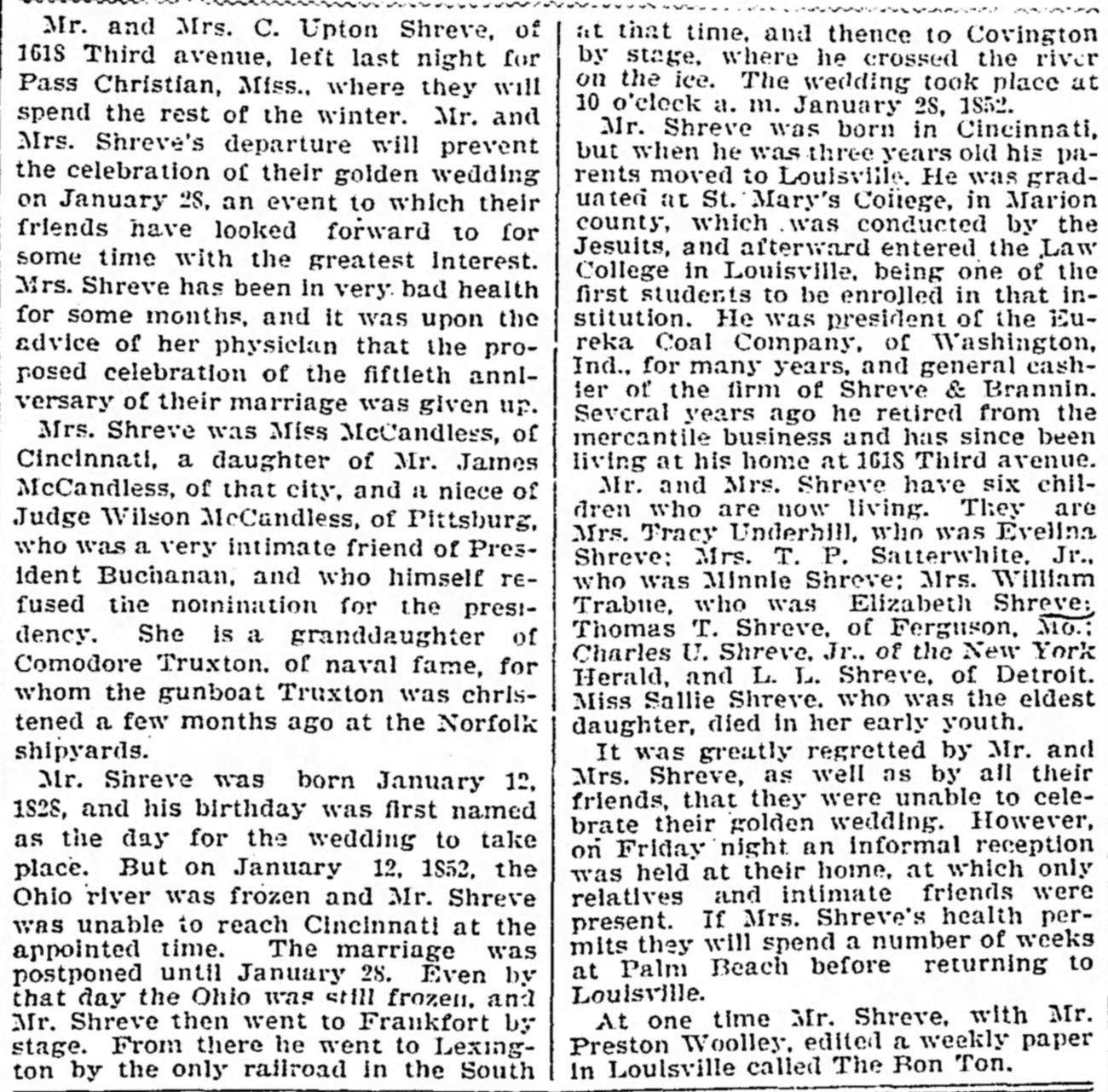 Mr. and Mrs. C. Upton Shreve, of 1618 Third Avenue, left last night for Pass Christian, Mississippi, where they will spend the rest of the winter.  Mr. and Mrs. Shreve’s departure will prevent the celebration of their golden wedding on January 28, an event to which their friends have looked forward to for some time with the greatest interest.  Mrs. Shreve has been in very bad health for some months, and it was upon the advice of her physician that the proposed celebration of the fiftieth anniversary of their marriage was given up.

Mrs. Shreve was Miss McCandless, of Cincinnati, a daughter of Mr. James McCandless, of that city, and a niece of Judge Wilson McCandless, of Pittsburg, who was a very intimate friend of President Buchanan, and who himself refused the nomination for the presidency.  She is a granddaughter of Commodore Truxton, of naval fame, for whom the gunboat Truxton was christened a few months ago at the Norfolk shipyards.

Mr. Shreve was born January 12, 1828, and his birthday was first named as the day for the wedding to take place.  But on January 12, 1852, the Ohio River was frozen and Mr. Shreve was unable to reach Cincinnati at the appointed time.  The marriage was postponed until January 28.  Even by that day the Ohio was still frozen, and Mr. Shreve then went to Frankfort by stage.  From there he went to Lexington by the only railroad in the South at that time, and thence to Covington by stage, where he crossed the river on the ice.  The wedding took place at 10 o’clock a.m. January 28, 1852.

Mr. Shreve was born in Cincinnati, but when he was three years old his parents moved to Louisville.  He was graduated at St. Mary’s College, in Marion County, which was conducted by the Jesuits, and afterward entered the Law College in Louisville, being one of the first students to be enrolled in that institution.  He was president of the Eureka Coal Company, of Washington, Indiana, for many years and general cashier of the firm of Shreve & Brannin.  Several years ago he retired from the mercantile business and has since been living at his home at 1618 Third Avenue.

Mr. and Mrs. Shreve have six children who are now living.  They are Mrs. Tracy Underhill, who was Evelina Shreve; Mrs. T. P. Satterwhite, Jr., who was Minnie Shreve; Mrs. William Trabue, who was Elizabeth Shreve; Thomas T. Shreve, of Ferguson, Missouri; Charles U. Shreve, Jr., of the New York Herald, and L. L. Shreve, of Detroit.  Miss Sallie Shreve, who was the eldest daughter, died in her early youth.

It was greatly regretted by Mr. and Mrs. Shreve, as well as by all their friends, that they were unable to celebrate their golden wedding.  However, on Friday night an informal reception was held at their home, at which only relatives and intimate friends were present.  If Mrs. Shreve’s health permits they will spend a number of weeks at Palm Beach before returning to Louisville.

At one time, Mr. Shreve, with Mr. Preston Woolley, edited a weekly paper in Louisville called The Ron Ton.