Bequest In Will Becomes Ryder’s Cemetery In Lebanon

By Kentucky Kindred Genealogical Research on August 5, 2018 • ( Leave a comment )

This old will has a gem of a piece of information.  In it Augustus Ryder gives money to buy land for a cemetery and its upkeep.  But it is also the first will written in the new Will Book 1 after the Marion County Courthouse burned when General John Hunt Morgan came to town July 5, 1863.  The original will was included in those books that became ashes on that date.  In many counties that suffered the loss of a courthouse it was very common for copies of wills, and other records, to be brought in and added to the new books to have those records on file.

On my first reading I thought perhaps Augustus Ryder was a soldier of the Civil War, who intended to take care of his sister Julia (she is the only family member named in the will) and use the rest of his estate for the betterment of the community – a new cemetery.  Augustus Ryder was civic minded, but I don’t believe he served during the war.  He was a German immigrant, born in 1812.  I can’t say when he came to this country, but in the 1850 census he is living in Marion County with John and Sally Yowell, aged 40, born in Germany and listed as a merchant.  John Yowell was a bookkeeper, aged 53, his wife, 57.  In 1860 Augustus is 47, a bookkeeper, living with Michael S. Ray.

My great-grandmother Mary Elizabeth Crow Coulter Alford is buried in Ryder’s Cemetery.   The cemetery is located on a hill on Highway 68, Main Street, in Lebanon, halfway between Sulphur Spring Road and Woodlawn Avenue. 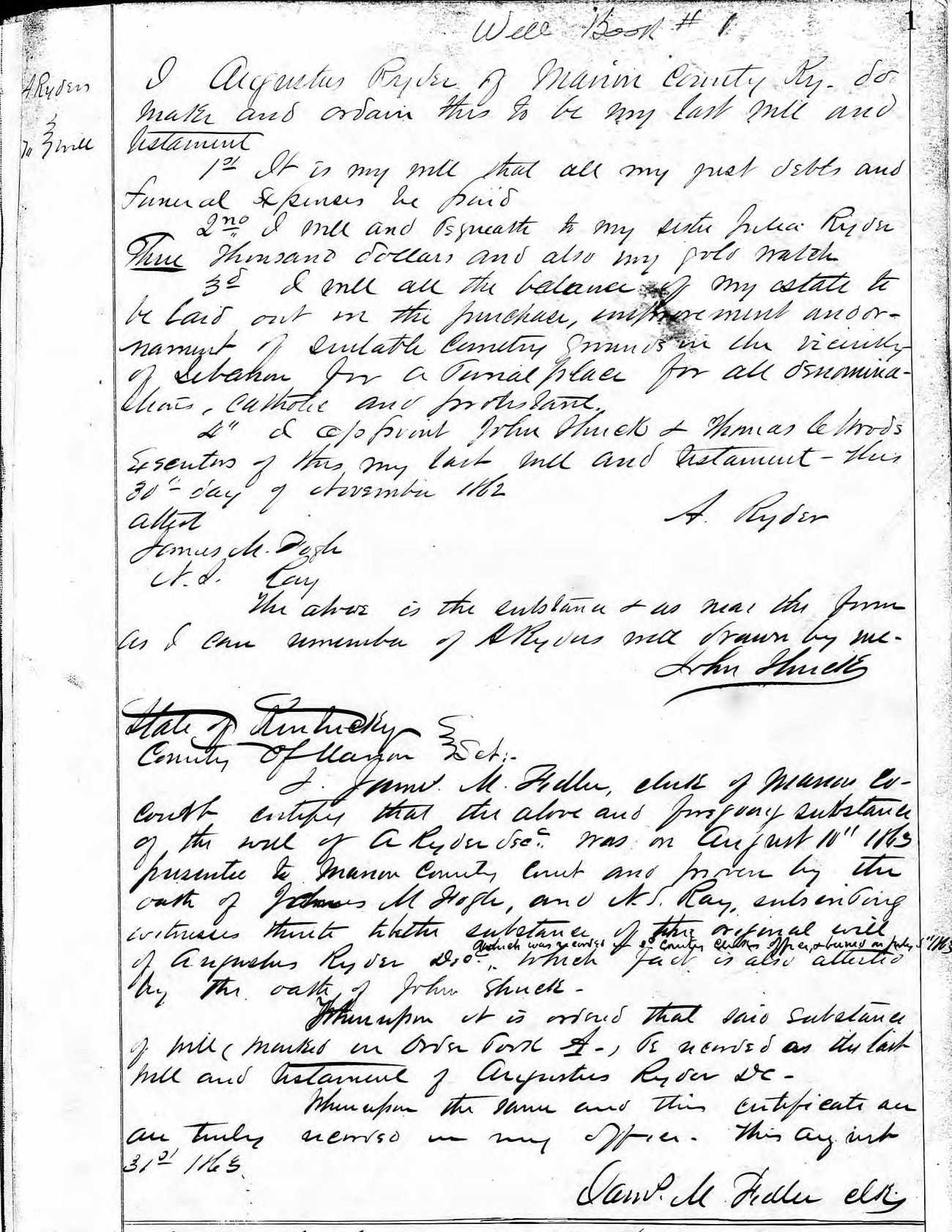 I, Augustus Ryder, of Marion County, Kentucky, do make and ordain this to be my last will and testament.

1st.  It is my will that all my just debts and funeral expenses be paid.

2nd. I will and bequeath to my sister Julia Ryder three thousand dollars and also my gold watch.

3rd. I will all the balance of my estate to be laid out in the purchase, enforcement and ornament of suitable cemetery grounds in the vicinity of Lebanon, for a funeral place for all denominations, Catholic and Protestant.

4th.  I appoint John Shuck and Thomas C. Woods, Executors, of this my last will and testament, this 30th day of November 1862.

The above is the substance and as near the form as I can remember of A. Ryder’s will drawn by me.

State of Kentucky, County of Marion

I, James M. Fuller, Clerk of Marion County Court, certify that the above and personal substances of the will of A. Ryder, deceased, was on August 10, 1863, presented to Marion County Court and proven by the oath of James M. Fogle, and N. S. Ray, subscribing witnesses thereto, to be the substance of the original will of Augustus Ryder, deceased, which was received in the County Clerk’s office and burned on July 5, 1863, which fact also attested by the oath of John Shuck.

Thereupon it is ordered that said substance of will marked in order form A is received as the last will and testament of Augustus Ryder, deceased.

Whereupon the same and this certificate are truly received in my office this August 31st, 1863.