By Kentucky Kindred Genealogical Research on September 8, 2018 • ( Leave a comment )

William L. Martin was featured in an earlier post – so much information was on his gravestone!  William was the son of Hartwell Martin and Sallie Porter.  The family was from Charles City County in Virginia.  William L. was born there May 26, 1782, on the banks of the James River.

In 1807 William Martin married Sarah Shofner, daughter of Henry Shofner and Cloe Hart.  Henry was a veteran of the Revolutionary War.

William and Sarah had only one child – Henry Martin – born March 22, 1808.  He married Mary Dearen on December 24, 1828, and had many children, including seven listed in their grandfather’s will – William D., Harriet A., Henry P., James W.,  Paschal W., Sally A. and Corrintha C. Martin.  William D. must have been the oldest.  He lived with his grandparents in 1850, where the census of Larue County lists him as 20, and as a student.

William L.’s wife, Sarah, was the recipient of his entire estate.  She died in 1886 at the age of 94 years.  After her death her son and grandchildren received their inheritance.

Will of William L. Martin

In the name of God, amen.  I, William L. Martin, being feeble in body but sound in mind and memory feel it to be my duty to dispose of my worldly effects that the good Lord hath seen cause to bless me with, do therefore make and publish this my last will and testament in the following words and forms.

It is my will and desire that all of my just debts be paid and that my body be decently interred after my death and that the residue of my estate be disposed of in the following manner.

First.  I will and bequeath all that I am possessed of consisting of all my lands, Negroes and perishable property and cash rates of money to my beloved wife Sarah Martin for and during her natural lifetime and in the event she should marry again she is only to have one third of my estate for her natural lifetime and further more she is to have the right to sell any of the property and convey the same at anytime she may think proper.

Second.  It is further my will and desire that my beloved grandson, William D. Martin, have, and I do hereby give to him my farm, the one on which I now live in the County of Larue in the State of Kentucky, he to have possession of the same at the death of my wife, and I also give to him my black woman Malvina, my girl, Martha Jane, the boy John, the boy Tam and the boy Davy, and my said grandson named aforesaid is to have possession of the Negroes named above at the death of my wife.

Thirdly, it is my will and desire that my beloved son, Henry Martin, have and I do hereby give and bequeath to him the farm and tract of land on which he now lives, situated on the Little South Fork of Nolin, Larue County, Kentucky, and also four hundred dollars in money to have the possession of property and money at the death of my wife.

Fourth.  It is my will and desire that my three granddaughters, Harriett A., Sarah A, and Corrintha C. Martin, have at the death of my wife and I hereby give to each of them one hundred dollars. 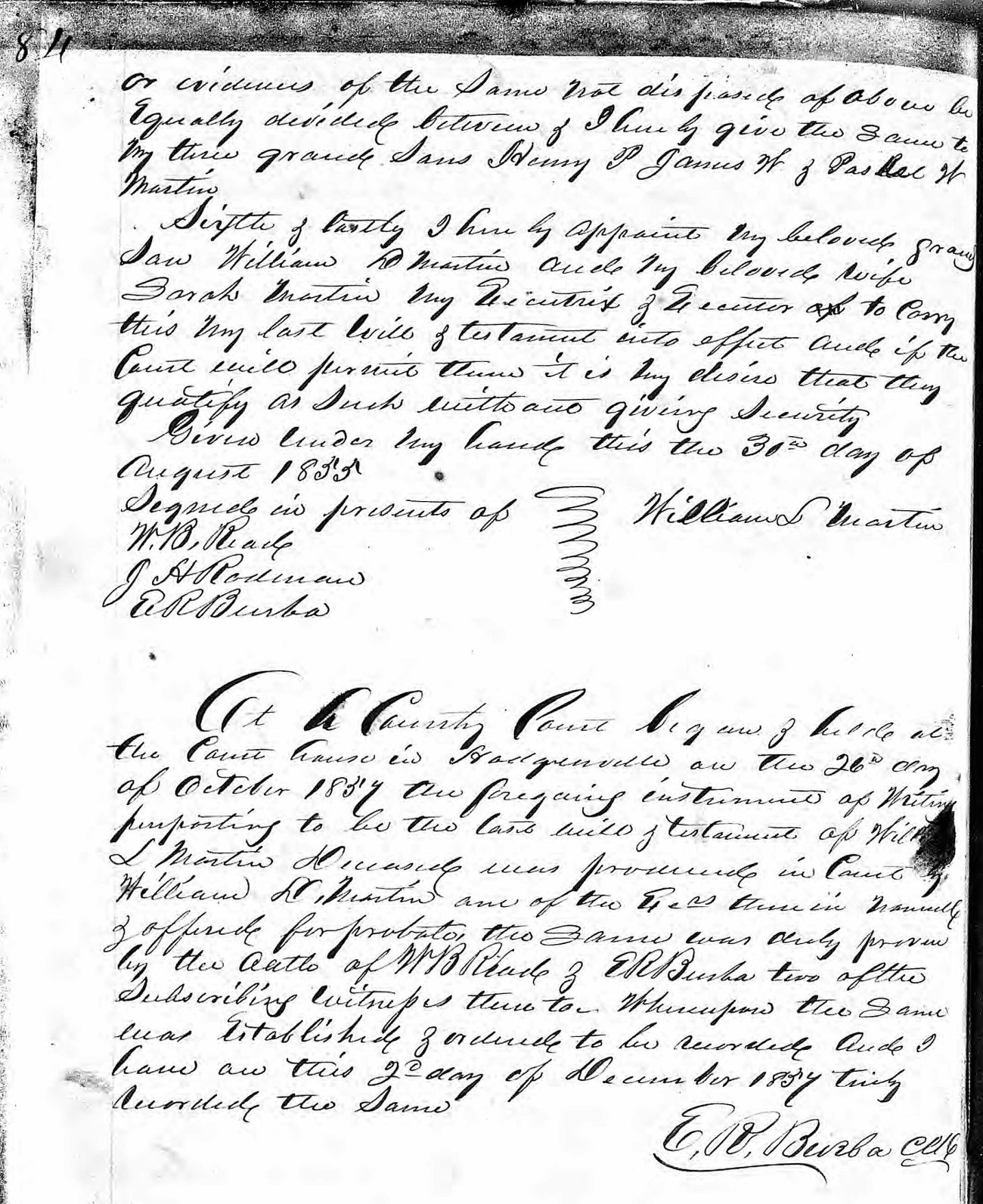 or evidence of the same not disposed of above be equally divided between and I hereby give the same to my three grandsons, Henry P, James W. and Paschal W. Martin.

Sixth.  Lastly, I hereby appoint my beloved grandson, William D. Martin, and my beloved wife, Sarah Martin, my Executrix and Executor to carry this, my last will and testament into effect, and if the court will permit them it is my desire that they qualify as such without giving security.

At a County Court began and held at the courthouse in Hodgensville, on the 26th day of October 1857, the foregoing instrument of writing purporting to be the last will and testament of William L. Martin, deceased, was produced in Court by William D. Martin, one of the executors therein named and offered for probate, the same was duly provided by the oaths of W. B. Reade and E. R. Burba, two of the subscribing witnesses thereto, whereupon the same was established and ordered to be recorded and I have on this 2nd day of December 1857 thus accorded the same.