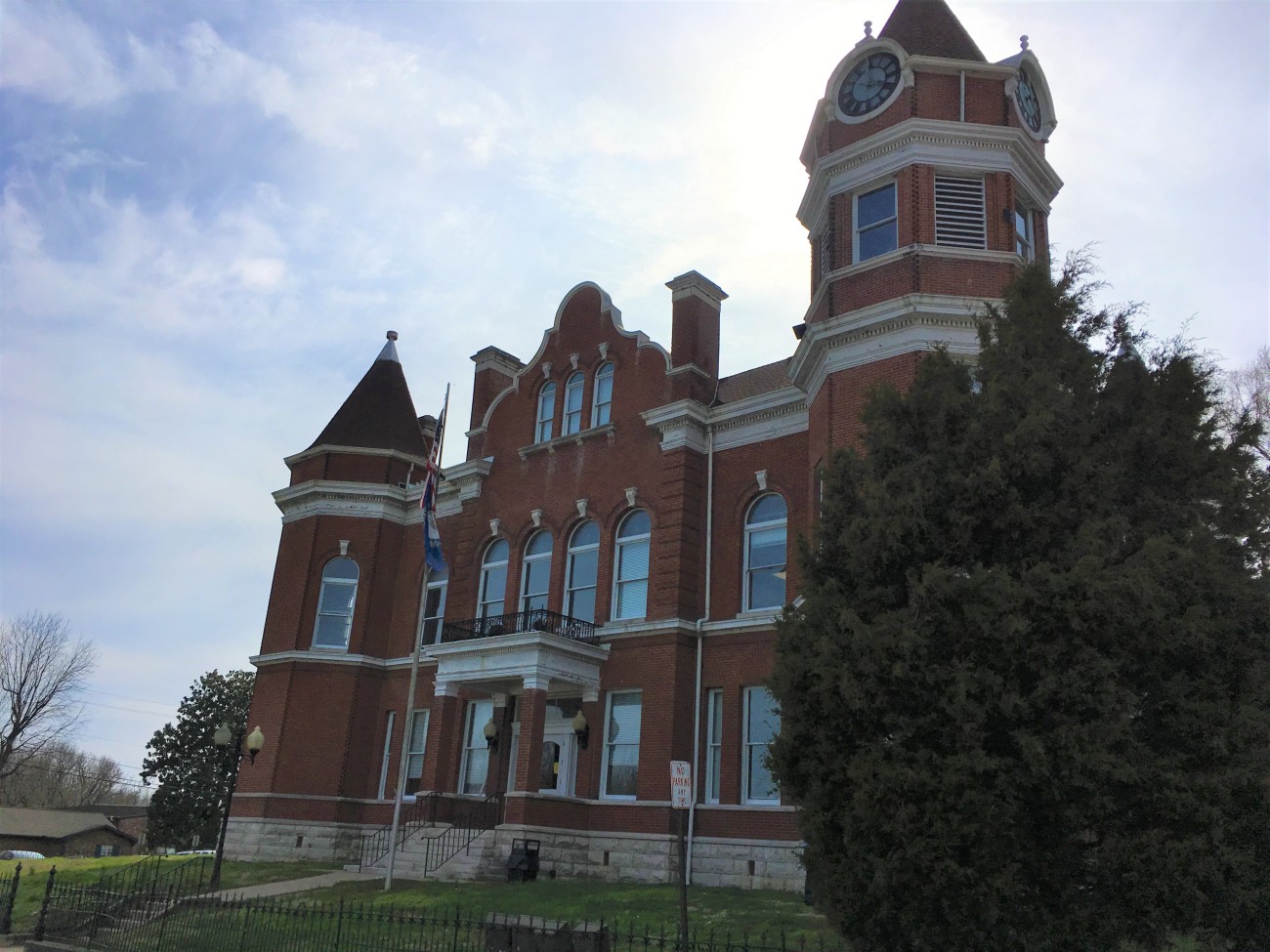 If you are a history buff, and especially a fan of courthouses, you won’t want to miss seeing the historic Fulton County Courthouse in the city of Hickman.  Ritchey and I drove through Hickman on our way to Kentucky Bend on Wednesday of our trip.  The city sits on a bluff above the Mississippi – on the west side of the county.  Coming back, we drove through Hickman to the city of Fulton – on the east side of the county.  When I asked where the beautiful courthouse was located, they told me it was in Hickman.  I knew that, it just didn’t enter my mind while we were there.  It was already 7:00 p.m. by this time so we drove back to Paducah.

The next day we were scheduled to go to Ballard, Carlisle and Hickman County.  At the last cemetery, with plenty of sunlight left, I looked at Ritchey and said, ‘Are you game enough to drive back to Hickman to photograph the Fulton Courthouse?’  Silly question, he is always ready for anything.  So, we drove back to the courthouse, and it was glorious.  The sun was at the top of the building, which made for a bit of squinting to take photos, but I was so happy to have the opportunity.  Since it was so late, we couldn’t go inside.  But as I have previously said, we will return to this beautiful area.

In addition to the photos we took I’ve found a couple of interesting newspaper articles about two renovations of the courthouse through the years – one in 1955 and another in 1991. 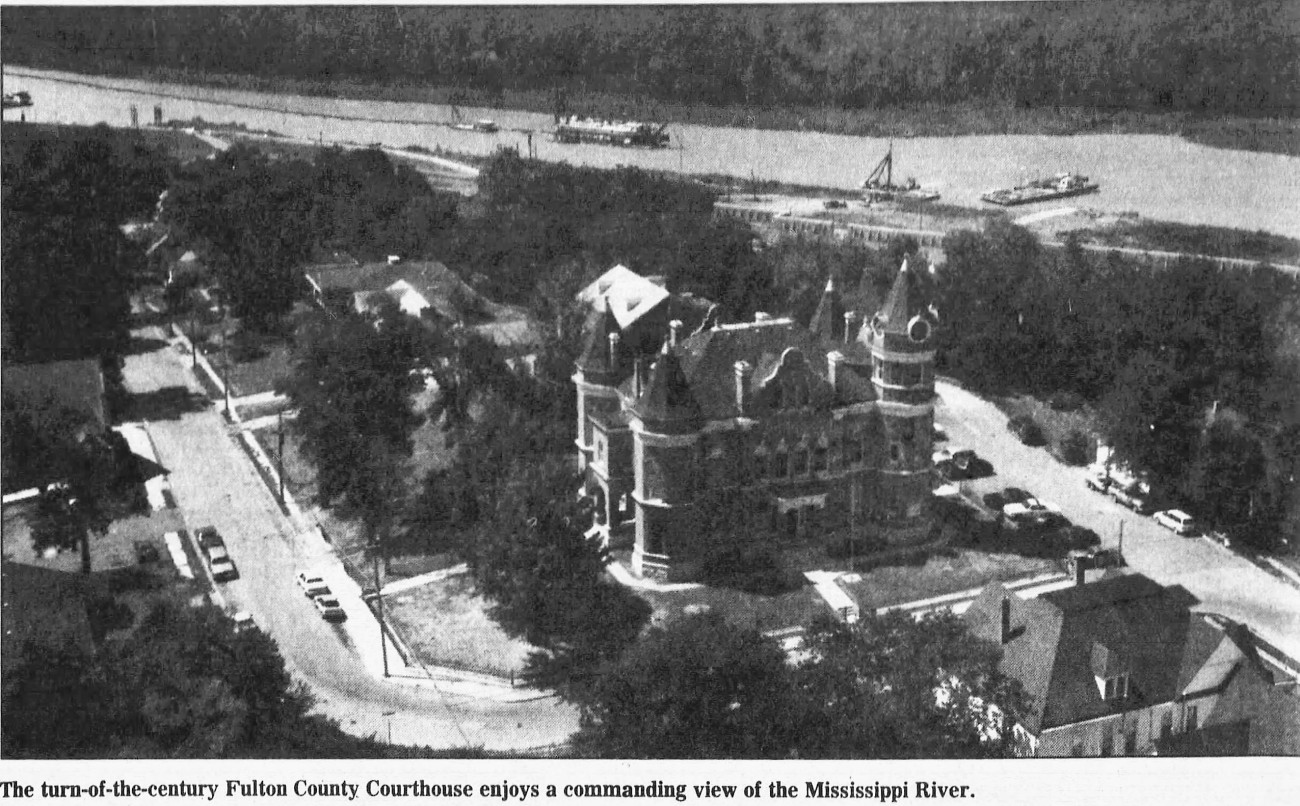 Included with the articles are photos – one of an aerial view of the courthouse – which shows just how close to the river it is.  We had no idea we were that close when we visited – the residential area was covered with trees that blocked the view.

In the Interior Journal, Stanford, Lincoln County, Kentucky, of Thursday, February 24, 1977, Fulton County’s courthouse was described in the National Register form as, ‘The towers and gables sit like a crown on the forehead of the bluff, vivid against the sky and the river, yet in its domestic material, harmonizing with the residential area around it.’’

One of the major features of this brilliant courthouse is the clock tower which houses the only Seth Thomas clock in the nation that still uses cables and gears.

The Fulton County courthouse, one of the most picturesque in Kentucky, has been given a face-lifting – its first major alteration since it was built in 1903.

Modernization of the castle-like courthouse, located atop the highest bluff in Hickman and overlooking the rolling Mississippi Rover, was brought about by a mixup in the state finance office in Frankfort that provided more than $30,000 for the remodeling job.

The money, collected by the state government through a special 10-cent road levy, was returned to Fulton Fiscal Court when it was finally discovered that the bonds for which the money was being raised had been retired.

Because of the extra money, the courthouse now has modern heating facilities, a new vault, new office fixtures in the county court clerk’s office, new benches and a new jury box in the courtroom, and new desks, filing cabinets and tile flooring in the other offices.

Pot-bellied stoves, work-scarred desks and foot-worn floors have either been replaced or covered.

Perhaps the most drastic change is the small addition made to the building to house the new vault.  On the back side of the building, so that the work is barely noticeable at a casual glance, the new bricks contrast with the 52-year-old bricks in the rest of the building.

The new addition juts out near one of the four circular tower arrangements at each of the corners.  Those towers rise three stories high and on the first-floor level are either part of the corner office or contain winding light-house type stairways to the second floor and courtroom.

There two of the towers become conference rooms.  On the third-floor tower level are the clocks.

Judge Homer Roberts estimated that the remodeling job has cost about as much as the building itself did.  He said that he hadn’t checked but had been told the building cost about $25,000. 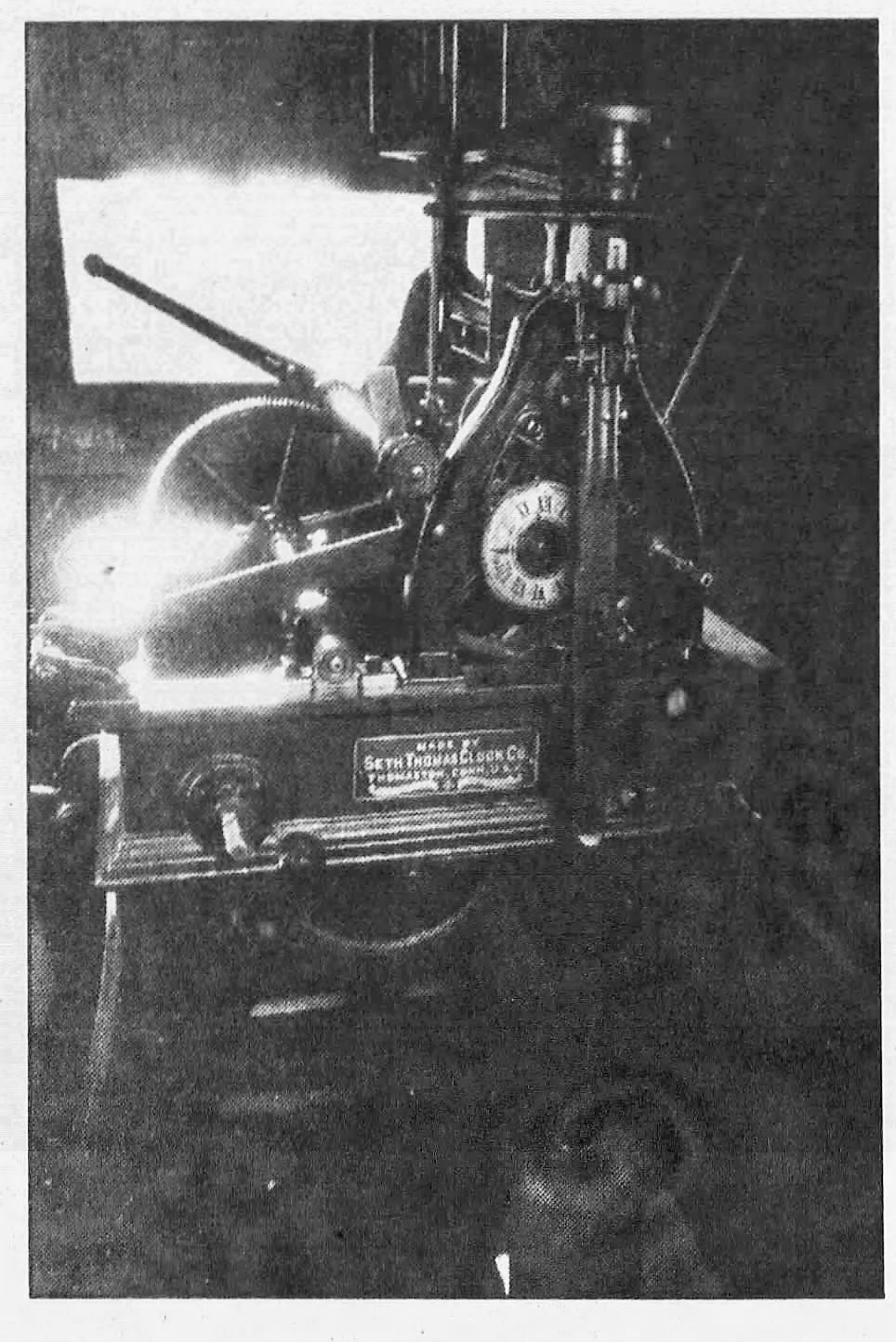 Its four octagonal turrets rise toward the sky and culminate in four spires, the tallest of which houses a huge Seth Thomas clock, perhaps the only one left in the nation still running the way it was designed to, with weights and cables and gears.

From its new third floor windows – the whole floor is new – one can see the rolling Mississippi River in the distance.

It’s a slice of pure Americana.

The exterior of the Fulton County Courthouse hasn’t changed much.  It has been repaired and spruced up, but still looks much like it did nearly 90 years ago when it first opened.

But inside, the changes are significant.  In fact, said Judge-Executive James Everett, the entire building was gutted.

About the only things left were the exterior walls, the marble floor on the ground floor, the Set Thomas clock and two sweeping circular staircases between the first and second floors.

The rest is new, including an entire third floor.  It took nearly a year and a half, and the state spent more than $2 million on it, but Everett and other state and county officials agree it was well worth it.

‘We had to do something,’ Everett said.  ‘The Administrative Office of the Courts said we were either going to have to fix it up or they were going to move out and build a building of their own.’

Everett said a small county like his could not afford to pay for the project.  ‘But we didn’t want to lose this beautiful building.’

Because the courthouse is on the National Register of Historic Places and because of its intrinsic value, AOC agreed to pay for the entire $2.065 million project.

‘It might have been cheaper to have built a new building,’ Everett said, ‘but to sacrifice this building would have been a shame.  This is something the town, the county, all of western Kentucky can be proud of.’

Despite its modern amenities, decorators were able to maintain touches her and there of the old-time atmosphere.  For instance, the etched and beveled glass at the entrances was crafted by local artisans at Glass Designs. 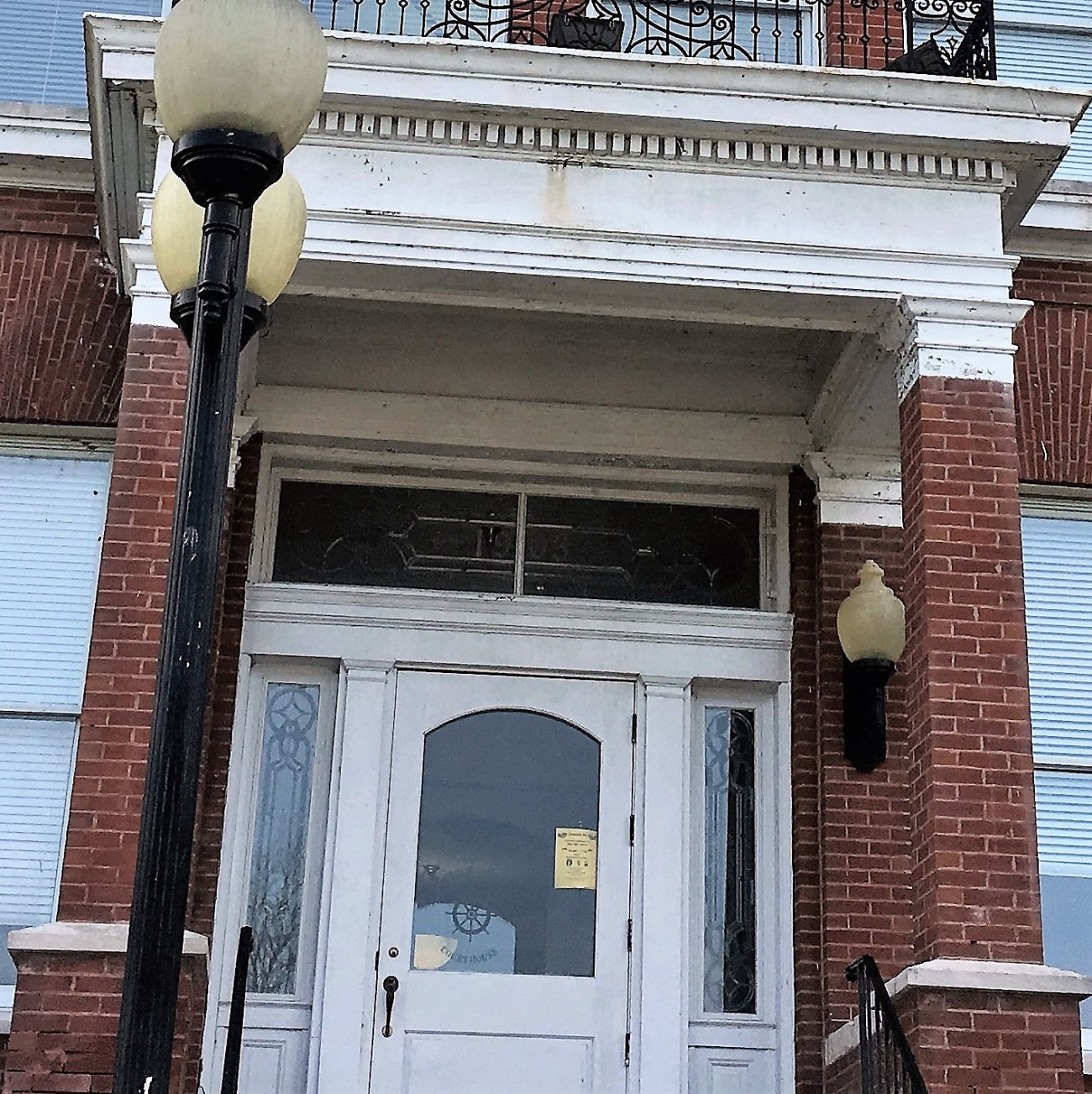 The etching of a pilot wheel on some of the door glass is a tribute to the county’s namesake, Robert Fulton.

The circuit courtroom has two huge circular ceiling lights, which are made to resemble skylights.

The district courtroom, constructed on the third floor, has a high vaulted ceiling with tall windows at each end.

At the rear of the room is an observation deck where people can look out at the Mississippi.

‘We had to lower the ceiling of the second floor to build the third floor,’ Everett said.  ‘So we ended up with these high windows that looked sort of odd and that nobody could look out of.  So our architects came up with the idea of the observation deck.’

But Everett said he’s most proud of the clock.  ‘We understand there were only 11 Seth Thomas cocks like this in the nation.  Only three remain, but the other two have been electrified.  This is the only one in the nation that still runs on weights and cables.’ 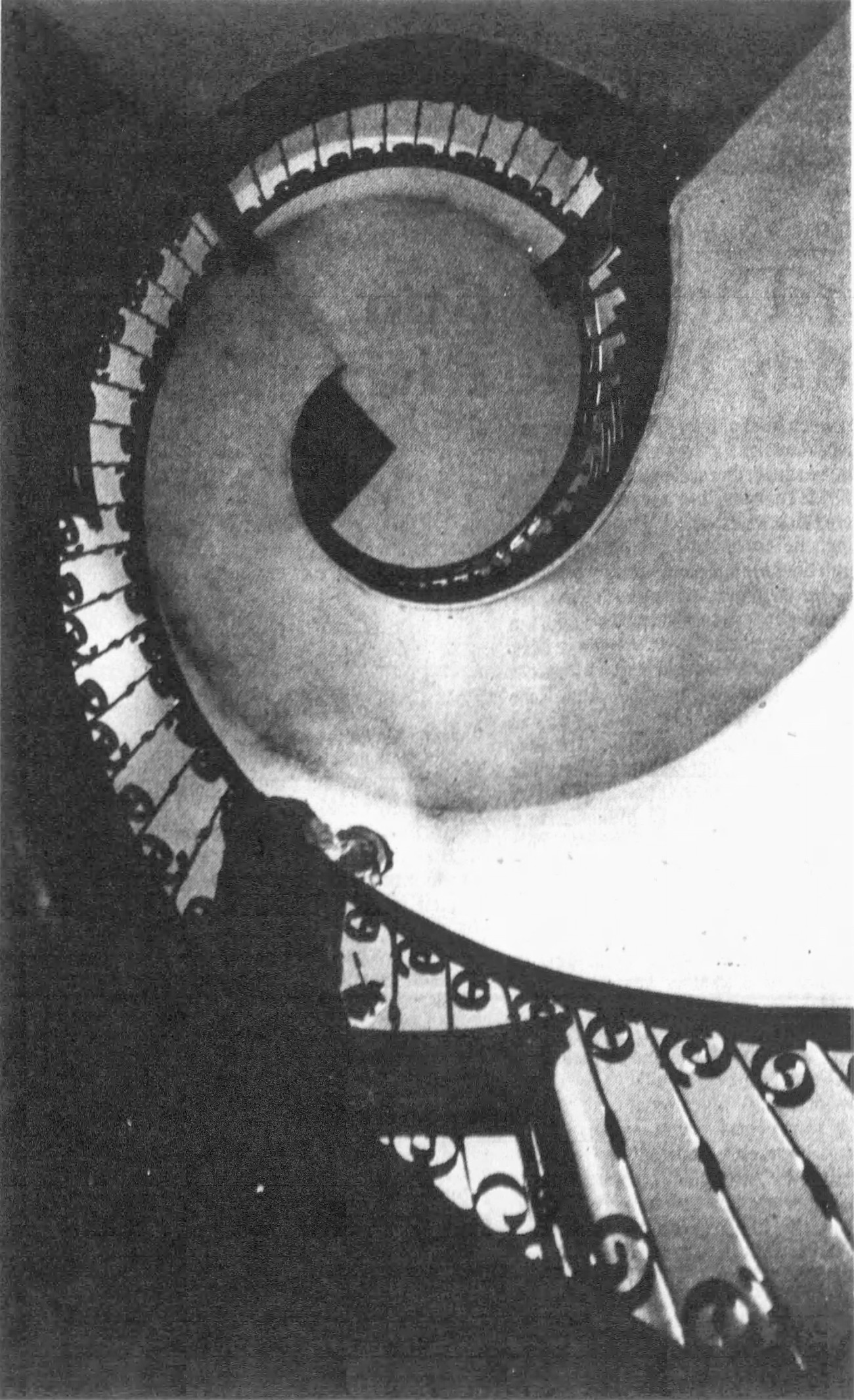 But there are other sources of pride.  ‘We had to fight the fire marshal to keep these circular staircases.  There are no provisions for open staircases anymore.  So we had to make sure they were sealed off from the rest of the building.’

One of the staircases is for public use.  The other leads from the circuit judge’s ground floor offices into his upper chambers and the courtroom.  Only court employees will use it.

Near that stairwell is a feature of the courthouse not included in the original structure – an elevator.  Though elevators aren’t uncommon in multi-story buildings, Everett quipped that, ‘It is the only elevator in Hickman.’

There are also other modern conveniences missing from many of the state’s older courthouses – clean, modern restrooms on every floor.

‘I guess it’s silly to be proud of restrooms, but considering what they were like before, I really am,’ Everett said.

The building contains all AOC offices – for district and circuit clerks, judges and secretaries – but there was no room for county officials, including the judge-executive, clerk, sheriff and property valuation administrator.

Part of that problem has been taken care of by another old building across the street.

‘We bought the Johnson home and renovated it into offices for the county clerk, sheriff and PVA,’ Everett said.

‘That area is historical, and we envision a court square arrangement where people don’t have to go all over town to take care of courthouse business,’ Everett said.

Someday, he said, he hopes his office and other offices now housed in another building can be moved to the court square.

‘Because of the historical nature of the area, we would want to renovate an existing building, rather than build something new,’ he said.

Although it’s the biggest project, the courthouse renovation isn’t the only preservation project going on.

Work on downtown renovations continue, including the conversion of an old hotel into a bed and breakfast.

City, county and state officials also are making efforts to save the Hickman Ferry from extinction with a tri-state pact.

Everett said the people of Hickman are beginning to appreciate the historical significance of and see the potential for the little town.

‘We lost it for a while.  When talk revived about the Great River Road project, people were skeptical, they didn’t think anyone would want to come to Hickman for anything, but that’s changing.  People want to preserve our heritage and share it with others.’