Will of William McBride – Killed At the Battle of Blue Licks

By Kentucky Kindred Genealogical Research on April 7, 2017 • ( Leave a comment )

William McBride was born January 5, 1744, in Fauquier County, Virginia, and died August 19, 1782, in Blue Licks, Nicholas County, Kentucky.  He was the son of William McBride, Sr., and Sarah ?  He married Martha Lapsley October 17, 1765, in Augusta County, Virginia.  William McBride made his will in October of 1781, and died a year later, almost to the day, at the Battle of Blue Licks, one of the last battles of the Revolutionary War – after Lord Cornwallis had surrendered in October 1781 at Yorktown. 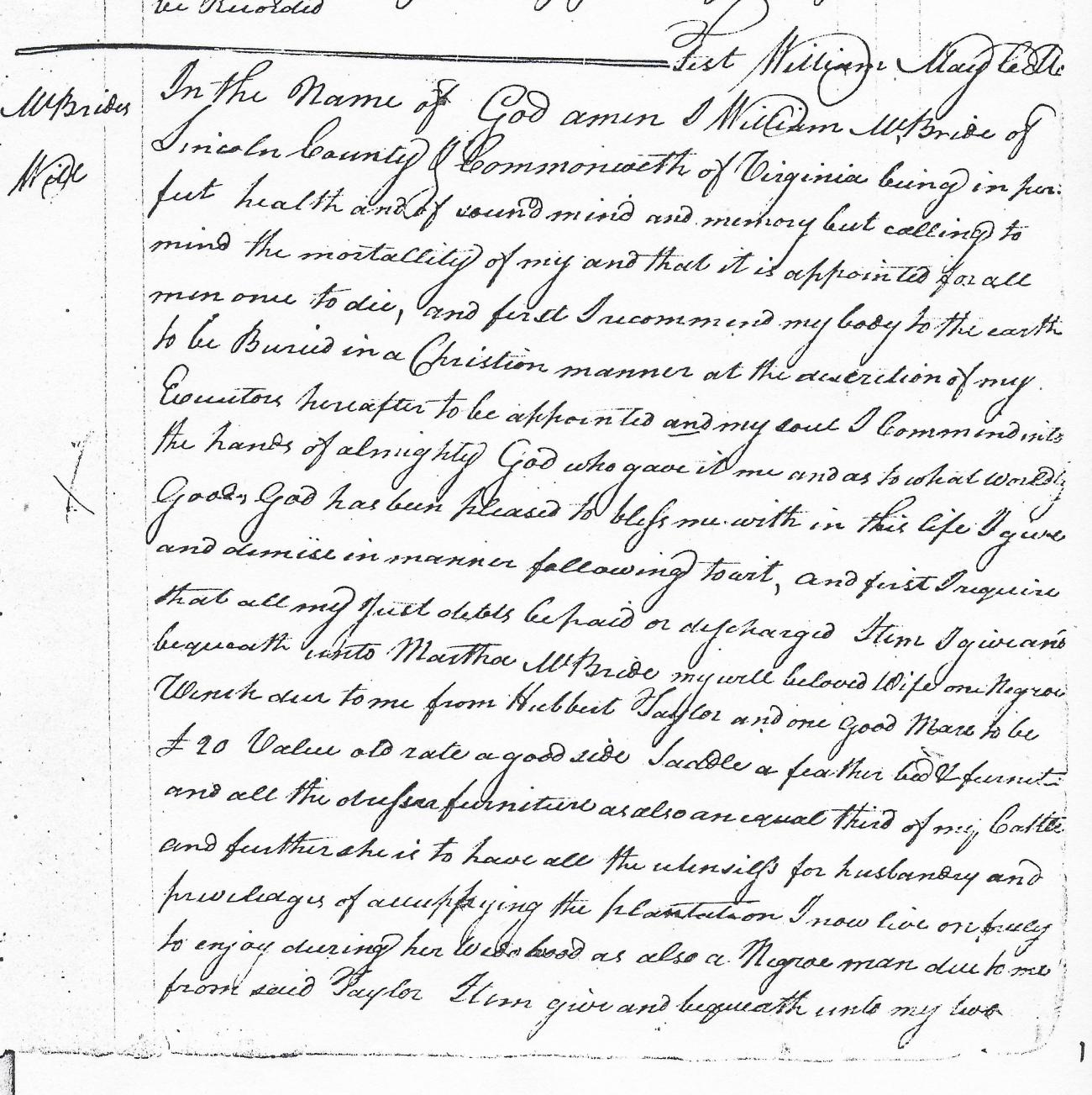 In the Name of God amen.  I, William McBride, of Lincoln County and Commonwealth of Virginia, being in perfect health and of sound mind and memory, but calling to mind the mortality of my body and that it is appointed for all men once to die, and first I recommend my body to the earth to be buried in a Christian manner at the discretion of my Executors, hereafter to be appointed, and my soul I Commend into the hands of almighty God, who gave it me, and as to which worldly goods God has been pleased to bless me with in this life I give and devise in manner following.  To wit, and first, I require that all my just debts be paid or discharged.

Item.  I give and bequeath unto Martha McBride, my well beloved wife, one Negro wench due to me from Hubbert Taylor and one good mare to be 20 pounds value old rate, a good side saddle and feather bed and furniture and all the ? furniture as also an equal third of my cattle and further she is to have all the utensils for husbandry and privileges of supplying the plantation I now live on to enjoy during her widowhood, as also a Negro man due to me from said Taylor.

Item.  I give and bequeath unto my two 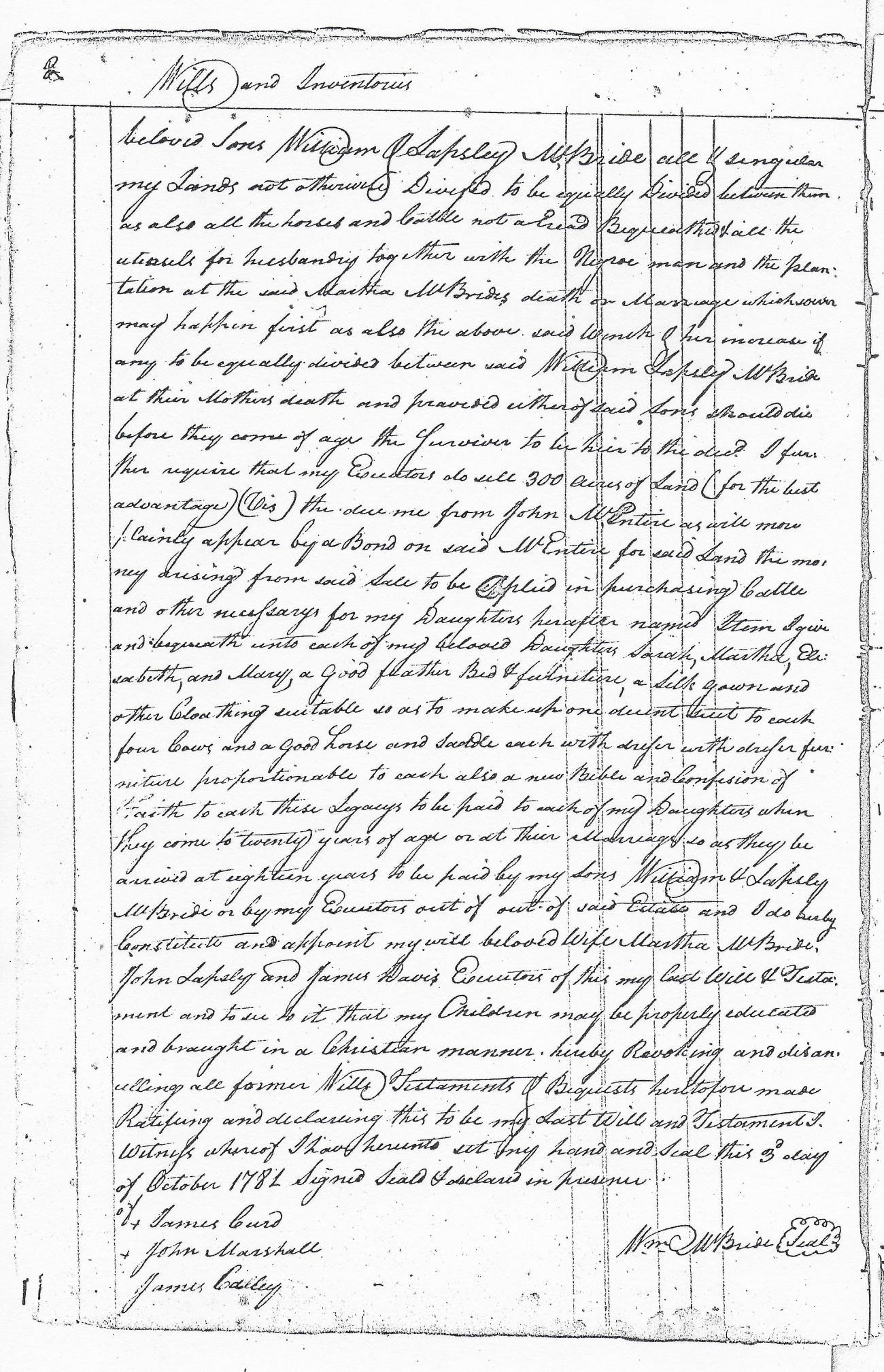 beloved sons, William and Lapsley McBride, all singular my lands not otherwise devised to be equally divided between them, as also all the horses and cattle not already bequeathed and all the utensils for husbandry together with the Negro men and the plantation at the said Martha McBride’s death or marriage, whichever may happen first, as also the above said wench and her increase, if any, to be equally divided between said William and Lapsley McBride at their mother’s death and provided either of said sons should die before they come of age the survivor to be heir to the deceased.  I further require that my Executors do sell 300 acres of land (for the best advantage) this due me from John McEntire as will more plainly appear by a bond on said McEntire for said land the money arising from said sale to be applied in purchasing cattle and other necessarys for my daughter hereafter named.

Item.  I give and bequeath unto each of my beloved daughters, Sarah, Martha, Elizabeth and Mary, a good feather bed and furniture, a silk gown and other clothing suitable so as to make up one decent suit to each, four cows and a good horse and saddle each, with dresser furniture proportionable to each, also a new Bible and Confession of Faith to each, these legacies to be paid to each of my daughters when they come to twenty years of age or at their marriages as they be arrived at eighteen years, to be paid by my sons William and Lapsley McBride, or by my Executors out of said estate, and I do hereby constitute and appoint my well-beloved wife Martha McBride, John Lapsley and James Davis, Executors of this my last Will and Testament and to see to it that my children may be properly educated and brought up in a Christian manner, hereby revoking and disannulling all former wills, testaments and bequests heretofore made, ratifying and declaring this to be my Last Will and Testament, in witness whereof I have hereunto set my hand and seal this 3rd day of October 1781.  Sealed and declared in presence of James Curd, John Marshall, James Calley.

At a Court held for Lincoln County 21st January 1783 this instrument of writing was exhibited into Court as the last Will and Testament of William McBride, deceased, and proved by the oaths of James Curd and John Marshall, two of the witnesses and ordered to be recorded.