I am sharing a tidbit from the book Pioneer History of Washington County, Kentucky, a compilation of newspaper articles by Orval W. Baylor and others, from the 1930’s in newspapers of the county.  I knew that goods from Washington County were shipped via creeks and rivers to the Ohio, then down to the Mississippi River and on to Natchez and New Orleans.  Until I read this article, I was not quite sure how that was accomplished.  I have driven through the area surrounding Frederickstown many times.  Cartwright’s Creek joins Beech Fork River at what most Washington countians know as ‘the burg’ – Frederickstown.  This creek was where some of the early settlers from Maryland came during the last years of the 18th century – my Carrico, Montgomery, Yates and Cambron families included.

Most of the time I have seen this area there is little water in creek or river.  But there are times that the water flows far too rapidly, even today.  This must be the ‘fresh’ that’s mentioned in the article – a word I did know before.

Ritchey lived in this area before we married and tells of the time he came home to the flooded creek and river and couldn’t get across to his house.  He even lost his favorite denim cowboy hat in this effort – a long time ago.

Here are a series of map shots to show just how boats filled with cargo made it from the area to New Orleans.

This shot shows Frederick town on the right.  The Beech Fork River goes from right to left, and you can see Cartwrights Creek come in to it from mid-right.  The river flows from Washington County into Nelson, south of Bardstown.  This is where John Hill, mentioned in the article below, ran his boats.

The Beech Fork continues across Nelson County until just south of Boston, on Hwy 62, it meets the Rolling Fork River.  This is the river that my dad fished on, although much further south in Marion County at St. Joseph (known as little St. Joe, since the cathedral in Bardstown was also St. Joseph).  The tiny church served this small area.

At Pitts Point it meets the Salt River, which continues on those two county lines until it dumps into the Ohio River at West Point.  This was only a portion of the boats journey. 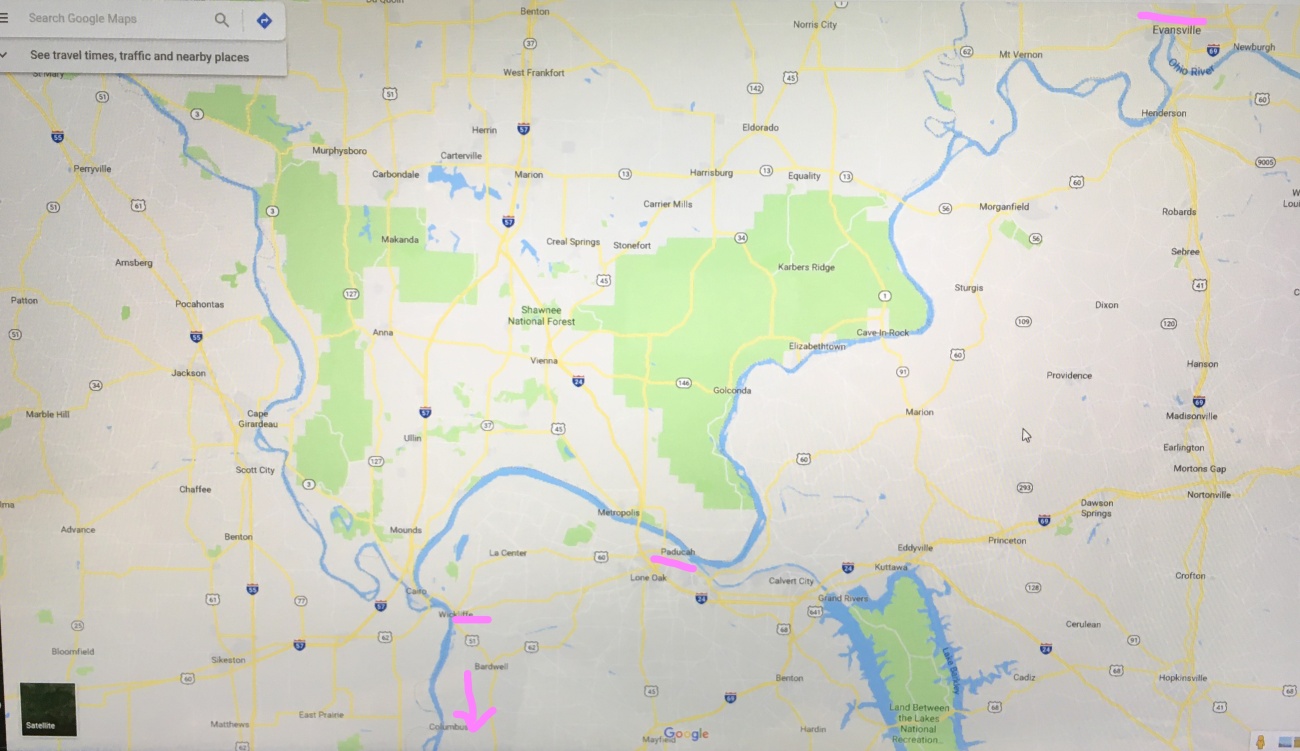 From Evansville to Paducah and on to Wickliffe, Kentucky, where the Ohio meets the Mississippi – then down to Natchez and New Orleans.  What a trip!

In an online book, A Complete Index to the Names of Persons, Places and Subjects Mentioned in Littell’s Law of Kentucky: A Genealogical and Historical Guide, an old book that was republished in 2009, there was mention of Ferguson’s Mill on the Beech Fork, on lands of Joshua Ferguson; and on the Rolling Fork, at the mouth of Panther’s Creek of Rolling Fork, on lands of Joseph Ray, for the year 1800.  I could not find Panther’s Creek on a map, not in the Marion-Washington county area.  It is quite likely it has been renamed.  I feel it could possibly be Stewart’s Creek, which runs into the Rolling Fork River.  This is my dad’s area.  His parents are buried at Stewart’s Creek Baptist Cemetery, as are several older members of the Ray family.  And until 1834 Marion was still part of Washington County.

The Beech and Rolling Forks were navigable in those days whenever swollen by rains.  A rise in the river was called a ‘fresh’, and the departure of a boat or boats was spoken of as ‘going out with a fresh’.  The principal shipping ports in Washington County before the year 1820, were Everhart’s boat-yard on the Rolling Fork, and Ferguson’s Mill and Parker’s Warehouse on the Beech Fork.  There was some loading at Ryan’s Mill, near Beechland, and the early residents of that district entertained high hopes of making that point a prominent one, but it seems not to have attained any great degree of popularity.

Not a few of the citizens of Washington County in the early days earned their sustenance by serving as pilots for boats that went out from various points on the Beech and Rolling Forks of Salt River.  It was not an uncommon sight in those days, at certain seasons of the year, to witness as many as ten or twelve boats going down either or both of the streams and headed for the southern markets at Natchez and New Orleans.

Boats that were used to carry cargoes to the southern markets were referred to as ‘Orleans boats’.  The usual length of these boats was fifty feet.  A boat that size would carry 250 barrels of whiskey, or about 8,500 gallons.  That commodity seems to have been the principle one shipped, though there were some cargoes of flour, hemp, tobacco and meats.

The only time a boat-owner suffered his boat to go out without a full load was when a ‘fresh’ came and the boat was only half or three-quarters loaded, and the owner was fearful that another rise in the river might not come for some weeks or months after.  One early pilot expressed the opinion in a deposition made in 1813, that to send a boat with less than 250 barrels, would have meant a loss to the person sending the same.  Another said that rather than wait several weeks or months for another ‘fresh’, he would take a boat out though partly loaded.

Peter Sibert, Jr., was a native of the Lincoln Country of Washington County, and intimate with Thomas and Josiah Lincoln, father and uncle of Abraham Lincoln.  His father, Peter Sibert, Sr., settled in Washington County, not far from the Lincoln homestead, and from him Sibert’s Run took its name.  There is a tradition that Peter Sibert, Jr., was best man at the wedding of Thomas Lincoln and Nancy Hanks, in 1806.  Thomas Lincoln’s name appears on the note of consent written by Katheryn Bridges in 1801, when her daughter married young Sibert, and Thomas Lincoln may have been best man at that wedding.

Young Sibert was an experienced pilot on the Beech Fork, taking boats out from Ferguson’s Mill, and starting them on their way to Natchez or New Orleans.  He deposed in 1813, that he had been so engaged for eight or nine years.  A 50-foot boat, in his opinion, would carry ‘with safety’ 250 barrels of whiskey ‘from Ferguson’s Mill to New Orleans which will contain about 8500 gallons of whiskey.’

Two hundred and fifty barrels was not the limit that a 50-foot boat would carry, according to the testimony of several shippers and pilots.  John Hill, of the family that early settled the district now known as Fredericktown, deposed in 1813, that he had been engaged in the boating business ‘from the mouth of Cartwrights Creek on the Beech Fork to New Orleans for several years.’  He said a 50-foot boat would carry 250 barrels of whiskey and he ‘had carried more and found no difficulty in consequence of the boat being heavy.’

Charles Stewart, another pilot, said he preferred boats when fully loaded for ‘the are easier to manage than light boats.’  At least he preferred heavy boats ‘for safety in winds on the Ohio and Mississippi.’  Stewart had piloted boats out of the Beech Fork for ten years ‘going at different times to Natchez and two times to New Orleans.’

A prominent shipping point on the Rolling Fork in pioneer days was ‘Everhart’s boat-yard’.  Martin Everhart had a mill there and numerous boats were loaded at his landing to go out when the river rose and float southward with their cargoes of flour, liquor, etc., to New Orleans.

A noted river pilot in those days was James H. Tucker.  He piloted many boats out of the Rolling Fork, on Salt River, the Ohio, and on to New Orleans.  He was chiefly employed to pilot the boats of Martin Everhart, though he sometimes had charge of those belonging to Benedict Spalding or Benjamin Ray.

The boats were moored in Everhart’s boat-yard where they were loaded to wait until there was ‘a high rise of the Rolling Fork River,’ and that coming, there was much activity as the men cut loose from the landing and the boats floated out on the rise.

Sometimes, if a boat was only partly loaded, the owners would cut loose and go out with the rise, rather than risk being held in the boat-yard for several weeks or months before another rise should come.  Tucker said in a deposition that he made in 1823, that he ‘would start with a boat two-thirds loaded sooner than I would miss a fresh.’

Often times there were mishaps when the rise came and the boat handlers in their haste to go out with the fresh, cut loose and started down the river.  Tucker spoke of one such.  He said the firm of Benedict Spalding and Company attempted to ‘take out a boat’ sometime after he ‘took out’ his own boat in March 1820, and that the Spalding boat was ‘stove and sunken in the Rolling Fork River before it went one-half mile’ from Martin Everhart’s boat-yard.

Jesse Abell was another pilot for boats leaving Everhart’s boat-yard.  He seldom went farther than the mouth of the Beech Fork, when the owner or some other man on board would take the steering in hand.  About three months, if there were no mishaps or unusual delays, were required to take a boat from the Rolling Fork to New Orleans and bet back home again.  Tucker said he started once ‘on the 13 March 1820,’ and got back to Kentucky ‘the June following.’