By Kentucky Kindred Genealogical Research on May 3, 2019 • ( Leave a comment ) 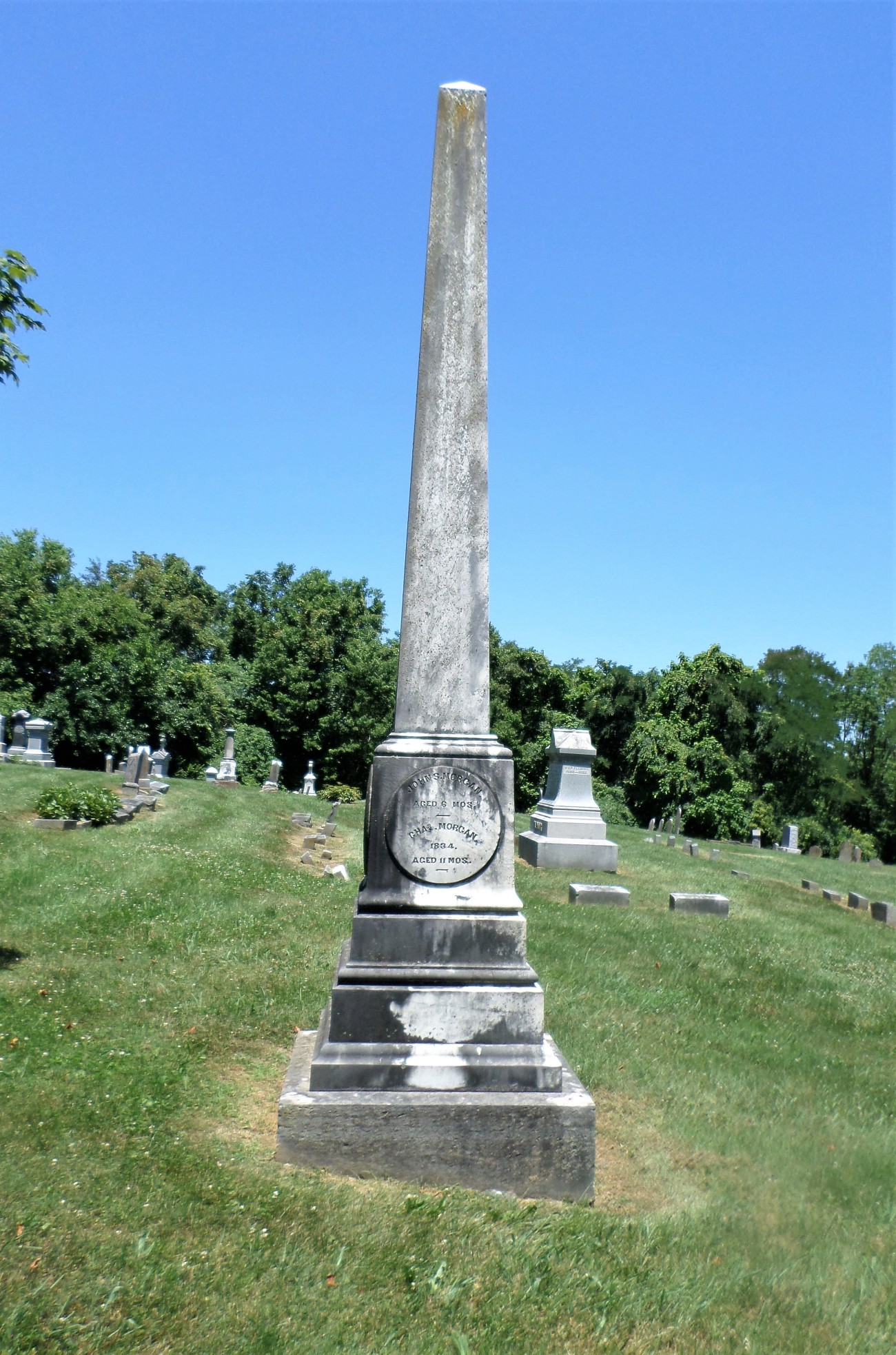 From Daniel Morgan’s gravestone we learn that he was born in Fauquier County, Virginia, February 12, 1791, the son of Captain Simon Morgan and Elizabeth Pickett.  His father was a captain in the Revolutionary forces and was wounded in the Battle of Eutaw Springs.  After the war he married Elizabeth Pickett.

Daniel Morgan married Anna Blackwell Clarkson April 20, 1818, in Fauquier County, Virginia.  Sometime after the marriage Daniel moved his family to Fleming County, Kentucky, where he remained the rest of his life.

Ten children were born to Daniel and Anna.  Four of their five sons died early.  Two, Charles and John, were infants. 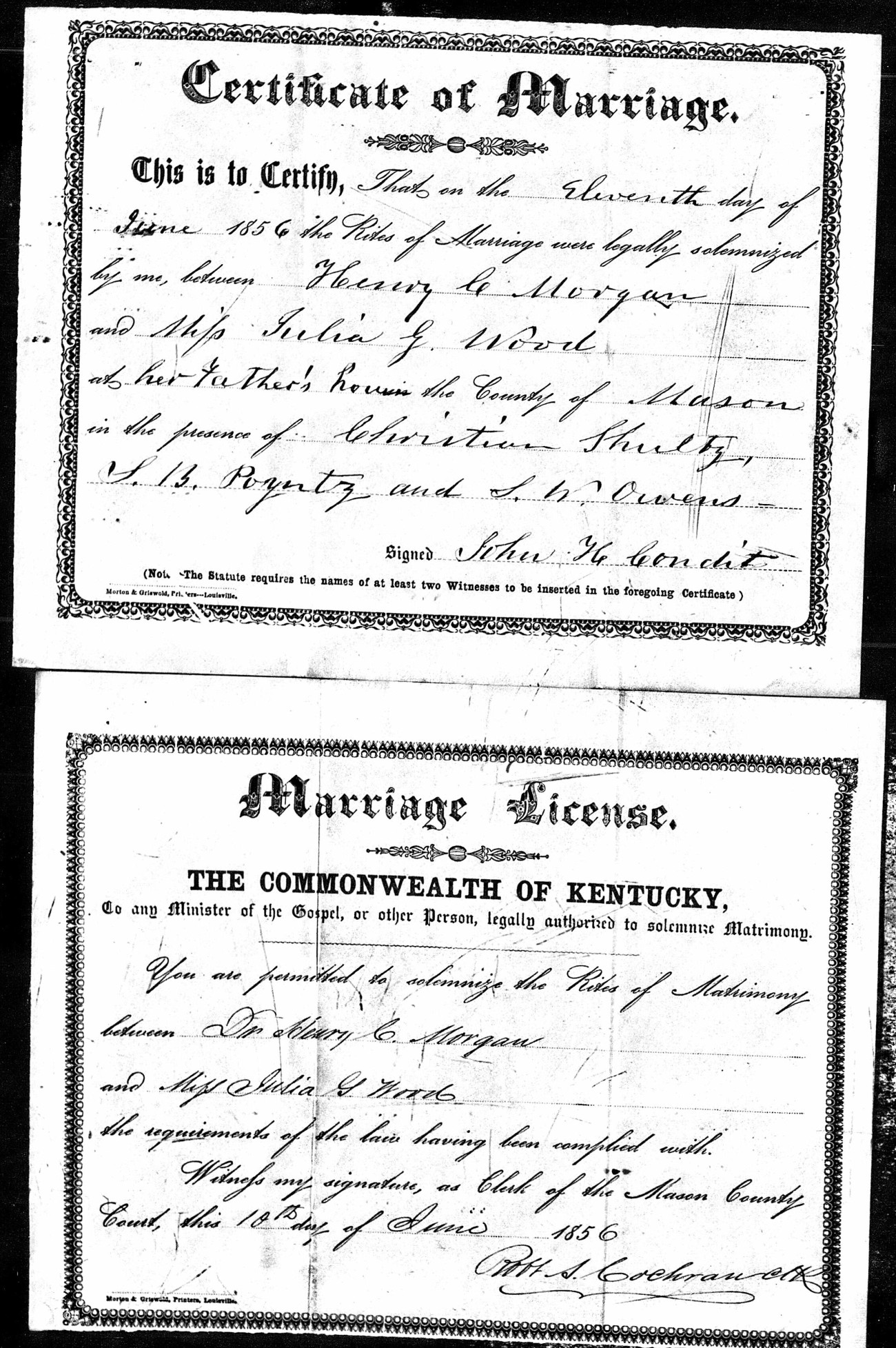 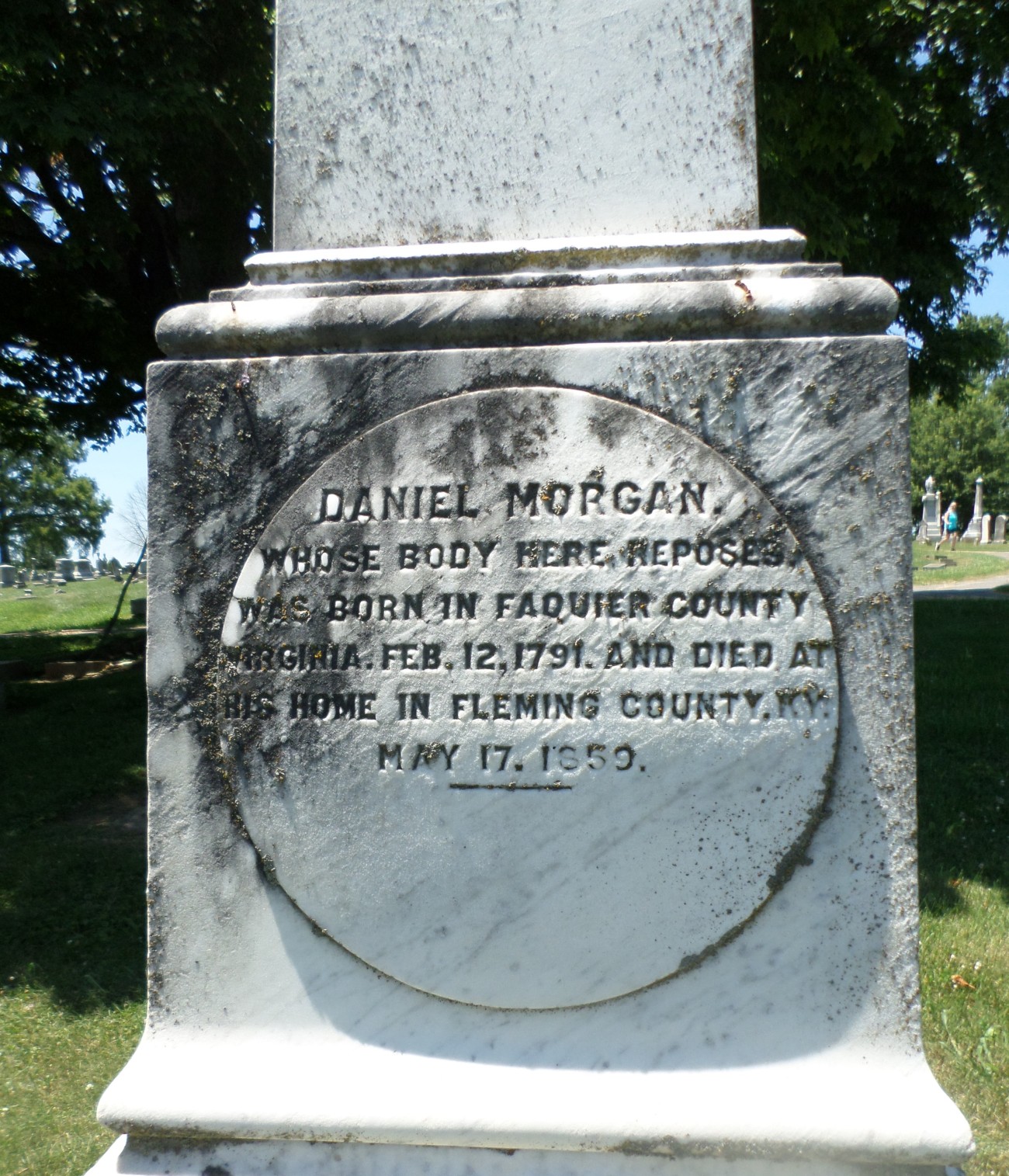 Daniel Morgan, whose body here reposes, was born in Fauquier County, Virginia, February 12, 1791, and died at his home in Fleming County, Kentucky, May 17, 1859.

Will of Daniel Morgan

Know all whom it may concern that I, Daniel Morgan, of the County of Fleming and State of Kentucky, being of sound and disposing mind make this my last will and testament and revoking any I have heretofore made.  In manner and form as follows to wit.

It is my will that my executors hereinafter named, pay my just debts and charge them and request them most earnestly to pay any liabilities according to the obligations they, my creditors, may hold on me without abatement of one cent for extra interest.  It was my contract and they relied on my honour.  I have confidence that they will not suffer it to be tarnished.

I give and bequeath to my beloved wife all my estate both real and personal to have and enjoy during her life and after her demise it is my wish that my estate should be equally divided between my children as follows – Elizabeth T. Wilson, Caroline Anderson, A. M. Wood, Mildred White, Henry C. Morgan and Eliza F. Morgan.  I wish so soon as convenient that my executors should sell my land upon which I live, and the proceeds paid over to my wife Ann Morgan who will retain as much of the money as will make her easy and

independent and the residue of said proceeds I desire her to divide equally between my children as aforesaid.

I have loaned to my daughter Caroline two servants, Susan and boy Lewis, which loan I now change in to a gift to my daughter Caroline, together with an equal share of all my estate during her natural life unless she should have heirs of her own body.  Then in that case I wish her to have an equal share of my estate forever, but if she should not have issue of her own body I desire that her distribution share of my estate should revert back to my estate and be assets in the hands of my executors, to be divided among my other children as aforesaid.  And in any event, the money and property including the two Negroes I loaned her and interest in my estate real and personal, I leave in trust to my son Henry C. Morgan to receive and hold, rent or hire or loan at interest and to manage all her interests and to deal out to her such monies or property as her wants may require.

I also leave the distributive share of my daughter Elizabeth S. Wilson of my estate both real and personal, in trust to my son Henry C. Morgan, to rent, sell, put at interest and to receive and manage her interest in my estate as aforesaid, for the sole benefit of my daughter E. S. Wilson and children.

I lastly appoint my friend B. W. Wood and my son, H. C. Morgan, my executors to this my last will.  In testimony whereof I place my signature, and all written with my own hand.  February 20th, 1858.

Codicil.  June 2, 1857.  I append this as a codicil to my will as aforesaid signed the 20th February 1858, by these waivers.  That the provision I made in regard to my wife in my foregoing will may be plain and easily understood.  I here repeat that I wish her to retain possession of all my slaves now in my possession and receive the hires to dispose of as she may choose until my land is sold.  Then I wish one-half of proceeds of sale of my land as aforesaid to be paid over to her to be loaned out or invested in Bank Stock, but not in Rail Road Stock, and that she receive the interest on the same for her especial use – to dispose of as she may choose.  And after my land is disposed of, and she comes in account of sufficient means to support as she desires, I then wish my slaves to be divided between my children as aforesaid, with such conditions heretofore made, except that my wife is to retain two women, a man and boy such as she may choose.  And at her death I wish the money and property devised to my wife to be equally divided between my children as aforesaid, with such conditions as I have made in my foregoing will.

I associate with my executors as aforesaid my wife as Executrix and having perfect confidence in their integrity and prudence, it is my wish that no security should be required of them in their administration, written with my own hand and subscribed. 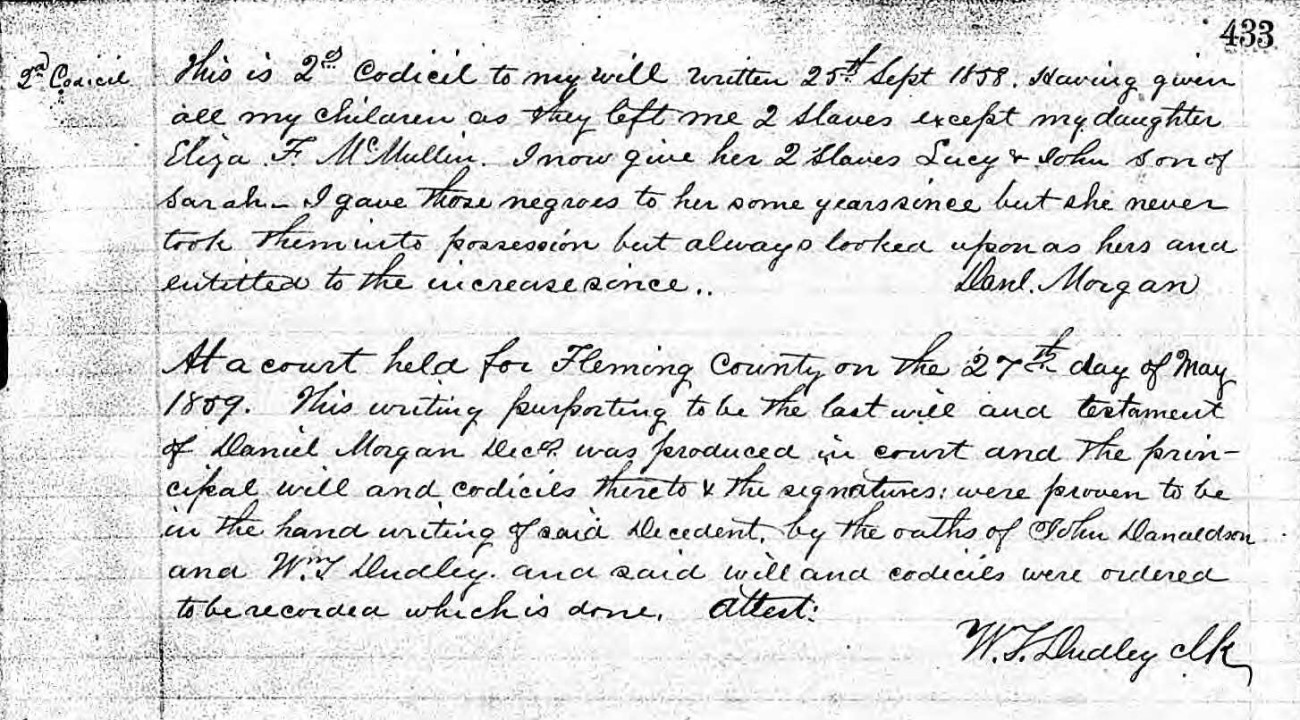 This is 2nd codicil to my will written 25th September 1858.  Having given all my children as they left me 2 slaves except my daughter Eliza F. McMullin, I now give her 2 slaves Lucy and John, son of Sarah.  I gave those Negroes to her some years since, but she never took them into possession, but always looked upon as hers and entitled to the increase since.

At a court held for Fleming County on the 27th day of May1859.  This writing purporting to be the last will and testament of Daniel Morgan, deceased, was produced in court and the principal will and codicils thereto and the signatures were proven to be in the handwriting of said decedent by oaths of John Donaldson and William T. Dudley, and said will and codicils were ordered to be recorded which is done.

Anna Blackwell Clarkson Morgan lived four years after her husband’s death.  She passed away July 22, 1863, in the 65th year of her age.