By Kentucky Kindred Genealogical Research on September 28, 2019 • ( Leave a comment ) 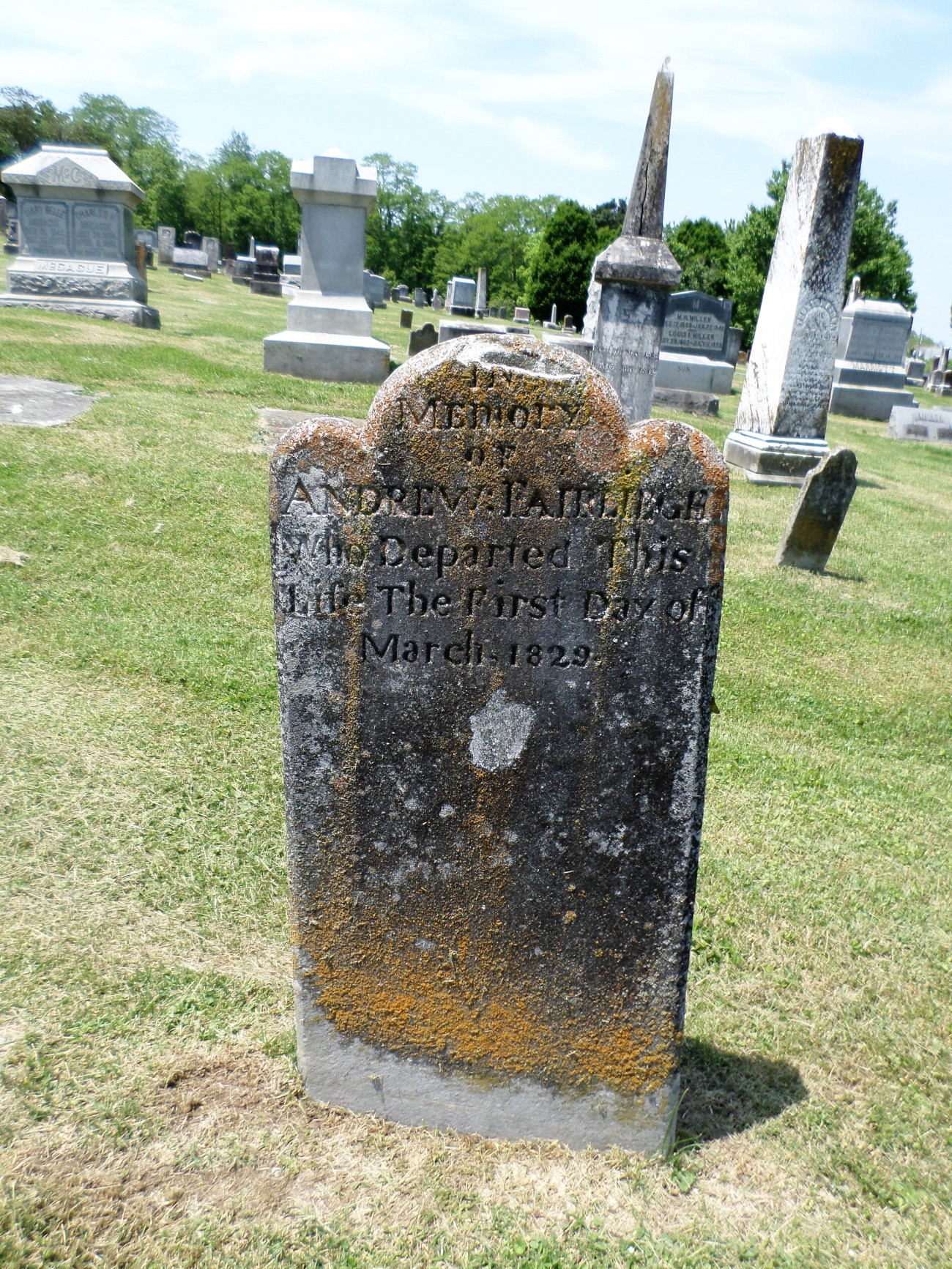 In memory of Andrew Fairleigh, who departed this life the first day of March 1829.  Elizabethtown Cemetery, Hardin County, Kentucky.

Andrew Fairleigh, Sr., came to Hardin County, Kentucky, from near Pittsburgh, Pa., and died in Elizabethtown, Ky., April 1, 1829.  He served as a private in Capt. Michael Cresap, Sr.’s Roll in the Revolutionary War.  James Dysart signed the following statement:  ‘Roll was duty approved before me April 20th, 1781.’

During the early Indian troubles Andrew Fairleigh, Sr., commanded a squad of soldiers which guarded the crossing of the Ohio at the mouth of Plippen’s Run.  He married August 2, 1791, in Hardin County, Letitia Rawlings, daughter of Edward Rawlings, a Revolutionary soldier, and his wife, Rebecca VanMeter, daughter of Jacob VanMeter, Sr. (1823-1798), and had two daughters, Sarah Elizabeth and Rebecca Fairleigh, who married brothers, Isaac Calvert and Miles Hart Chenowith, sons of Mary VanMeter Henton, by her second marriage to Major William Chenowith, a Revolutionary soldier – Mary VanMeter was a sister of Rebecca VanMeter Rawlings.  Many descendants of Isaac C. and Sarah E. Fairleigh are living in Hardin County.  All the family of Rebecca Chenowith went to California in an early day.  Andrew Fairleigh, Sr., after the death of his wife Letitia Rawlings in 1794, married a second time, December 10, 1795, in Hardin County to Letitia Swan, cousin of his first wife and daughter of Captain John Swan, a Revolutionary soldier, and his wife, Elizabeth VanMeter, daughter of Jacob VanMeter, Sr.  Letitia Swan was born in 1778 and died in Elizabethtown, Ky., October 10, 1845.

William Fairleigh, born April 19, 1797, in Elizabethtown, Ky., married November 4, 1819, in Hardin County to Elizabeth Enlow, born November 3, 1803, daughter of Isom and Mary Brooks Larue Enlow, first husband John Larue for whom Larue County was named.  William Fairleigh, on January 20, 1817, was sworn in as deputy clerk of Hardin County.  He was afterward a deputy sheriff of the county and clerk in the old Commonwealth Bank of Elizabethtown.

In 1824 the Kentucky Legislature created the county of Meade, and William was appointed clerk of the county and circuit court.  He at once moved with his family to Little York on Doe Run Creek, the first county seat of Meade County, and assumed his duties of the clerkship, or rather the courts were held temporarily at the house of John Rush, about two miles from Little York, the permanent court seat not having been located.

The county seat was finally located at Brandenburg’s Ferry, on the Ohio River, about four miles west of Little York.  William moved to the new county seat in the spring of 1825 and held the clerkship of both the county and circuit courts continuously until his death September 16, 1865.

George Fairleigh, born March 3, 1806 – died October 10, 1846, Hardin County, Ky., married Elizabeth Quinn.  Andrew Fairleigh, Jr., born in 1808, died in California during the gold rush, married in Nelson County, Ky., March 11, 1829, to Jane Talbott.  He was a silversmith at Elizabethtown and some of his work is cherished by his descendants.  Two sons, William George and Talbott Fairleigh, removed to St. Joseph, Mo., and became quite wealthy.