By Kentucky Kindred Genealogical Research on September 29, 2019 • ( Leave a comment ) 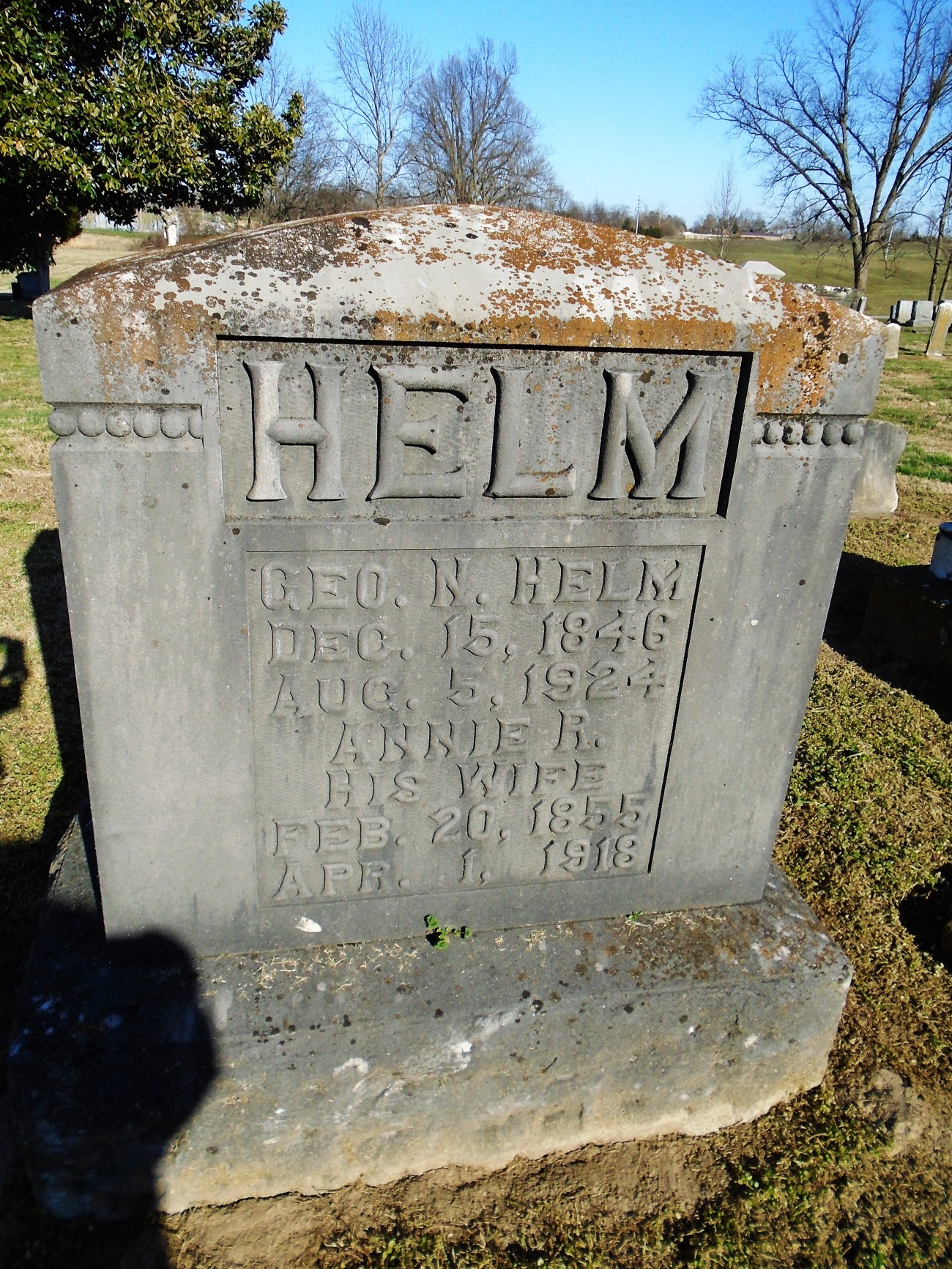 The gravestone of George Neville Helm, and his wife, Annie Robinson Catlett, has well survived weather and the ravages of time over last 100 years.  George died in 1924, San Diego, California, during a visit to his daughter, Mattie.  Online death records give his death date, but do not name his parents.

Annie died April 1, 1918, of malarial fever, along with congestion of the lungs.  Since her death was before the outbreak of Spanish Flu in September of that year I am at a loss as how she would have contracted malaria.  The Helm’s traveled quite often, but usually to areas such as St. Louis, Mississippi, Virginia and California – not where you expect to find malaria (to my knowledge).  Perhaps this was a mistake on the death certificate?  Annie’s parents were Henry Robinson and Annie Buck.  After the death of her mother she was adopted by her mother’s sister, Mary Elizabeth Buck, married to Dr. Henry Calmes Catlett.

George Helm and Anna Catlett were married December 10, 1873, by R. A. Beauchamp, with witnesses H. C. Catlett and J. Roulhoc, in Fulton County, Kentucky.  In the 1880 census of the county, George, 32, is listed as a farmer, born in Tennessee, both parents born in Virginia.  Annie, 24, was born in Kentucky, as was her mother; her father was born in Tennessee.  Daughter Mary, 5, was born in Illinois.  Does this mean the family lived in Illinois after their marriage, or were visiting at the time of Mary’s birth?  Daughter Mattie, 3, and son Henry, 1, were both born in Kentucky.  Living with the family was George’s mother, Rebecca Helm, 62, born in Kentucky, parents born in Virginia.  However, in Rebecca Helm’s will dated June 8, 1891, and probated in December court of that year, she states that George N. Helm is her step-son.  Her house and lot on the corner of Moulton and Tennessee Streets was to be sold and the proceeds given to ‘my dear step-son Robert Helm for the purpose of enabling him to pay off and cancel in full his indebtedness to his brother, my dear step-son George N. Helm.’  George N. Helm was named executor of her estate.

In the 1900 census, George is a grocery clerk; he and Annie have been married 26 years.  She had given birth to four children and those four are still living.  The additional daughter is Grace, born in 1882.  Henry, at 21, is the city clerk.

July 18, 1900, Mattie Helm marries J. Clint Ellison.  (All but one of the newspaper articles below are from The Hickman Courier of Fulton County, listed at HC).

Handsome Henry C. Helm is noted as a successful young man in this 1909 newspaper clip, as well as a busy one – he is in the insurance business, a Clerk of the city of Hickman, Worshipful Master of the Masonic Lodge, Secretary of the Fulton County Levee Board and other responsible positions.

In 1910, George is a druggist, as seen in ads throughout the Hickman Courier.  Only daughter Mary, 35, lives with the couple.  Even though she is still single she travels and visits relations and friends, her life very full.

By 1915, George and his son Henry open a new insurance office. 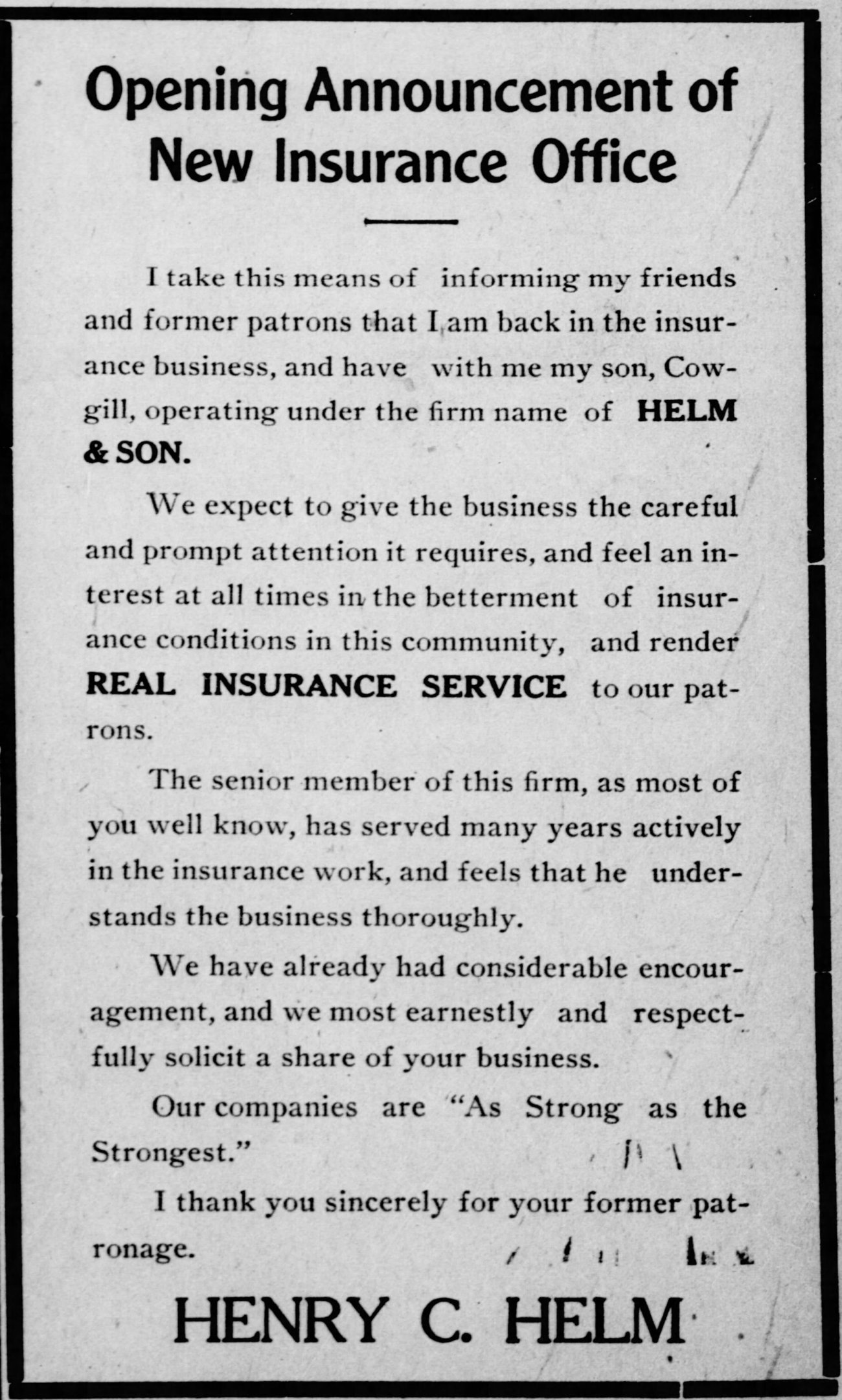