By Kentucky Kindred Genealogical Research on July 24, 2020 • ( Leave a comment )

The following will is that of Abraham Cassell, 1756-1844, the Revolutionary War veteran, written about the other day.

Notice in the sixth bequest, after the death of his wife, all Abraham’s real and personal estate is to be sold and divided amongst his children, with his grandson Samuel Cassell, son of John Cassel who died in 1815, is to receive one part of the land only.

Will of Abraham Cassell

In the name of God, Amen.  I, Abraham Cassell, of Jessamine County and State of Kentucky, being of perfect sound mind and memory do make and publish this my last will and testament in manner and form following (that is to say).

First.  It is my will and desire that all my just debts and funeral expenses to be paid by my after named executors.

Secondly.  I give and bequeath to my beloved wife, Catherine Cassell, all my personal estate during her natural life except what I shall hereafter mention, consisting of horses, cattle, sheep and hogs, also all household and kitchen furniture and all my farming utensils of every kind.

Thirdly.  I give and bequeath to my daughter, Barbary Cassell, one sorrel mare, a bureau and two feather beds, bedsteads and furniture, which she has already got, also one hundred dollars in money and two milk cows to be given to her by my executor.

Fourthly.  I give and bequeath to my son, Thomas Jefferson Cassell, one chestnut sorrel horse, one feather bed and furniture, which he has already got, also one milk cow to be given to him by my executors.

Fifthly.  It is my will that my wife, Catharine Cassell, also shall have the whole of my plantation whereon I now live, with all the appurtenances thereunto, belonging during her natural life.  It is my will that my wife may sell any part of my personal estate at any time she may think proper to so do and the money arising from such sale to be equally divided amongst all my children, reserving to herself one equal part.

Sixthly.  It is my will that after the death of my wife the whole of my estate, both real and personal, be sold by my executors and the money arising from such sale be equally divided amongst my children and Samuel Cassell, my grandson, to have an equal division of the money arising from the sale of the land only, and the money to remain in my executors hands until he, Samuel Cassell, arrives at the age of twenty-one or marries.

Lastly, I constitute and appoint my wife, Catherine Cassell, and my son-in-law David Coffman and John Stone, executors of this my last will and testament.  In testimony whereof I hereunto set my hand and affixed my seal the 21st day of November 1832. 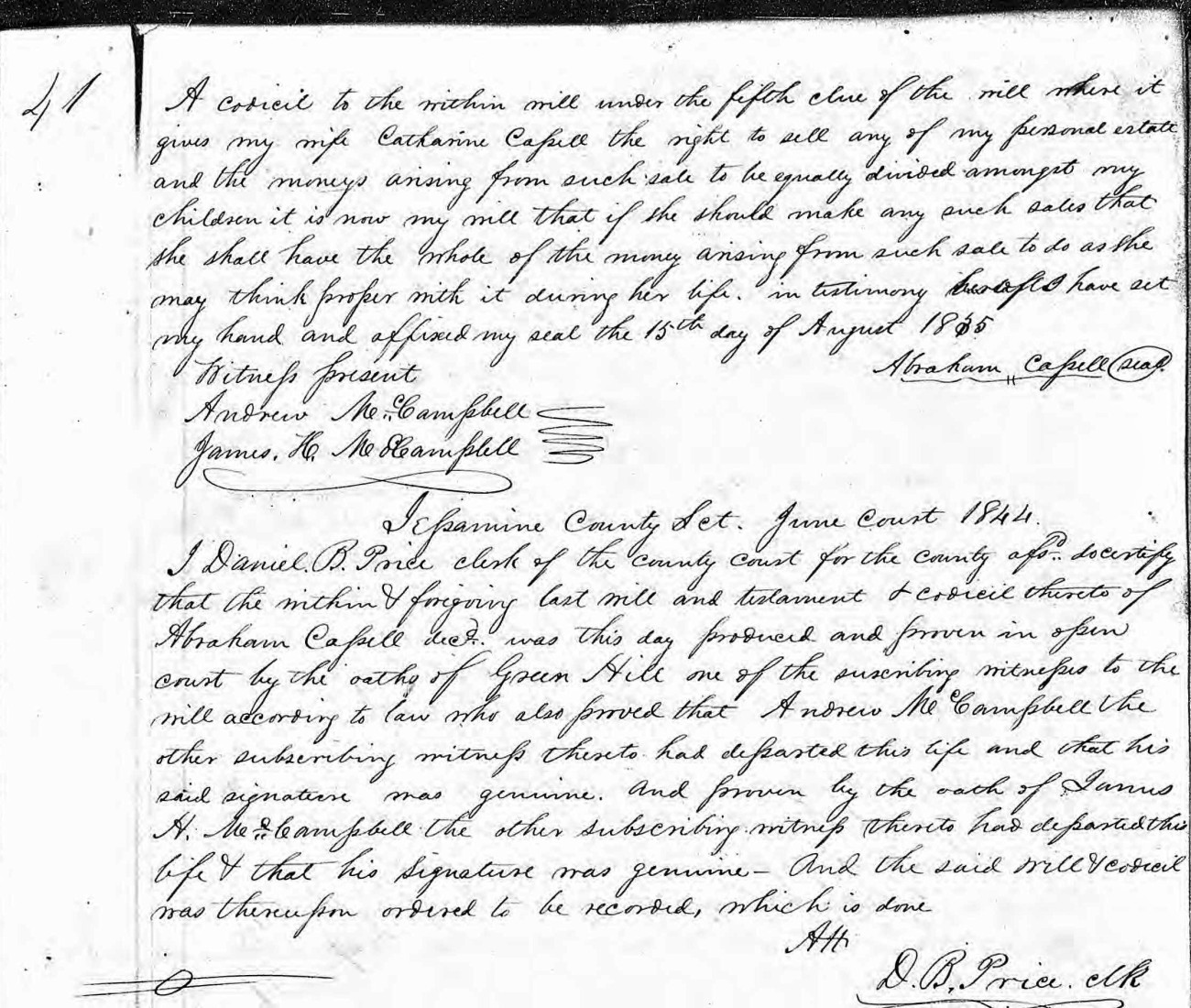 A codicil to the within will under the fifth clause of the will where it gives my wife, Catharine Cassell, the right to sell any of my personal estate and the moneys arising from such sale to be equally divided amongst my children, it is now my will that if she should make any such sales that she shall have the whole of the money arising from such sale to do as she may think proper with it during her life.  In testimony I have set my hand and affixed my seal the 15th day of August, 1835.