By Kentucky Kindred Genealogical Research on April 29, 2011 • ( Leave a comment )

This is my favorite picture of my grandmother!  She was featured in her hometown newspaper because of her concern for the Linton Cemetery.  She took great pride in being a Linton descendant.  Her mother was Frances Barber Linton, daughter of Edward Edwards Linton and Catherine Elizabeth Taylor Linton – both descendants of the Captain!  There are a few errors in the article that I will address at another time. 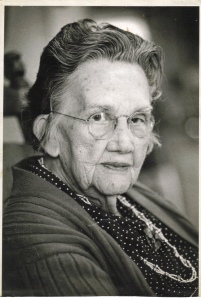 It is an 88-year-old mind bearing memories of things more than two centuries old.

A woman who is one of the oldest surviving relatives of a Revolutionary War captain worries about the plot of Washington County land that contains his remains.

“I pray that whoever owns the land now will take care of it,” says Mrs. Rue Carrico.  A Springfield woman whose ankles and body are bent with age, Mrs. Carrico’s spirit is alive and well in the tone of her voice and the gleam in her eyes.

And her spirit soars in the cause she bears now – protection of a gravesite.

She is the great, great granddaughter of Captain John Linton.

Mrs. Carrico’s information about her ancestor is based mostly on oral history passed along by family members.

Sallie Keene’s information is based on extensive research.  She and her husband, Milton, are both of Springfield and descendants of Captain John Linton.  Sallie Keene is a distant relative of Mrs. Carrico.

Here is the information about the captain provided by both women.

John Linton was born in 1750.  He earned the military title during the Revolutionary War.

“There’s no question about that,” says Sallie Keene.  “We have several relatives who are members of the DAR (Daughters of the American Revolution) through him.”

Although both women believe, it cannot be substantiated that Captain John Linton did indeed participate in the funeral of the nation’s first president

“It’s always been handed down in our family that he was in the Masonic honor guard that was part of George Washington’s funeral,” says Sallie Keene.

At the time of George Washington’s funeral, in 1799, John Linton and his wife, Ann Mason, lived in Virginia.

However, there is a deed purchase dated 1816.  Apparently because of his participation in the war, John Linton was able to purchase 2,000 acres of land for about $2 an acre.

It was located a few miles northeast of Springfield.

“They came here in either 1816 or 1818,” Sallie Keene says.  “They might have purchased the land while they still lived in Virginia.  An oath that he gave at the clerk’s office (in Springfield) saying that he did bring slaves from Virginia is dated 1818.”

At that time oaths were required.  Slave owners had to declare they had not intent to sell.

If he did arrive in 1818, Captain John Linton was about 68 years old when he got here.  He raised tobacco and hemp with slave labor, like many other farmers here at that time.

Many of John and Ann Mason Linton’s children came to Kentucky with them.  One daughter, Susan Linton Edwards, broke her leg while traveling through the Cumberland Gap.

There were at least 11 children:  Elizabeth, John Hancock, Catherine, Lewis, William, Mary, Susan, Martha, Nancy, Benjamin, and Moses, who was a famous doctor who lived in Missouri.

Sallie Keene says John Linton was Presbyterian, as were most of his children, except Moses.  Moses became a Catholic, and he was one of the founders of the Holy Name Society.

Captain John Linton, the man who experienced the birth of a nation, lived to the ripe old age of 86.  He died in 1836, about thirty years before the war that would split the nation.

John Linton is buried on the Kentucky land he purchased.  The grave along with its stone is still there now, surrounded by a black, wrought-iron fence, a few miles northeast of Springfield, just west of KY 555.

The plot appears to be on a hill that is higher than most of the surrounding landscape.  Rolling green farmland is visible for miles.

Wind sweeps the hill and chisels the inscriptions on the stones in the plot.  But Captain John Linton’s stone stands there still, and a briar barrier provides further protection from intruders.

It is the plot that Mrs. Rue Carrico worries about so much.

She doesn’t need to worry.

The land is now owned by Reed Spaulding.  He remembers that his grandfather who also owned the land promised descendants of Captain John Linton that the small graveyard wouldn’t be destroyed.

And although he has never talked with Linton descendants about the subject, he too feels bound by the promise.

“I wouldn’t do anything to anybody’s cemetery.”

So, in a sense, Captain John Linton survives Today.

Inscription under picture of graveyard – “The inscription on Captain John Linton’s stone, at left, says:  “In memory of John Linton, who departed this life December 4, 1836, In the 86th year of his age.”  The stone at right bears the name of William Moran, who married a daughter of Captain John Linton.  J.S. Moran, editor emeritus of The Springfield Sun, is a great, great grandson of Linton.  At 94, Moran might be the oldest surviving relative of the captain’s.  Other 19th century stones in the plot belong to William Linton and his wife, Eliza, and to John Edwards and his wife, Millie.”

Inscription under picture of John Linton: ” This photograph of Captain John Linton was reproduced from a tintype owned by the late Louis Linton of Russellville.”

Inscription under picture of Alice Carrico: ” While growing up, Mrs. Rue Carrico, shown above, heard stories about her ancestor who brought the family lineage into Kentucky, Captain John Linton.  Mrs. Carrico’s mother’s maiden name was Frances Linton, and her grandfather’s name was Edward Linton, direct links to a past two centuries old.”