The 1918 Spanish Flu outbreak took the world by storm. Some records say it infected 500 million people world-wide, and killed 50 to 100 million of them. Unusually this strain of flu killed those who would be considered strong enough to make it through an attack. Young adults 20 to 40 years old accounted for 99% of the influenza deaths in 1918-1919. Generally infants and adults over the age of 70 are those most in danger during a flu epidemic. The majority of deaths were from bacterial pneumonia, a secondary infection caused by influenza. This is borne out by the 1918 Kentucky death certificates that I examined – almost all deaths were from pneumonia, with influenza as the secondary cause. The virus also killed people directly, causing massive hemorrhages – from the nose, stomach, intestine and ears. In many instances, even if the flu did not result in death, people were so weakened by the illness that many jobs went undone, even digging graves for those who had died. Stores were closed. Health-care workers could not attend the sick. Mass graves were dug by steam shovel and bodies buried without coffins in many places over the world. An eastern Kentucky coal miner said the mines were closed for about six weeks, and “every porch that I’d look at would have a casket box a sittin’ on it.”

Influenza first appeared in Kentucky in Bowling Green, about September 27, 1918. Troops traveling from Texas on the Louisville and Nashville railroad stopped there and explored the city. They infected several local residents before returning to the train and traveling on. Louisville was the next city hit by the flu. It was calculated that there were approximately 1,000 cases there in the last few days of September. In the second and third weeks the deaths in Louisville were about 180 per week, and continued throughout the fall and winter months. On October 6th the Kentucky state board issued a state-wide proclamation closing all places of amusement, schools, churches and other places of assembly.

At the Kentucky Historical Society I took the microfilm roll of death certificates for 1918 and randomly copied about 15 to study for cause of death. Pneumonia and influenza were the major causes.

From The Weekly Advance from Ballard County, Kentucky, many deaths were reported due to pneumonia and influenza: 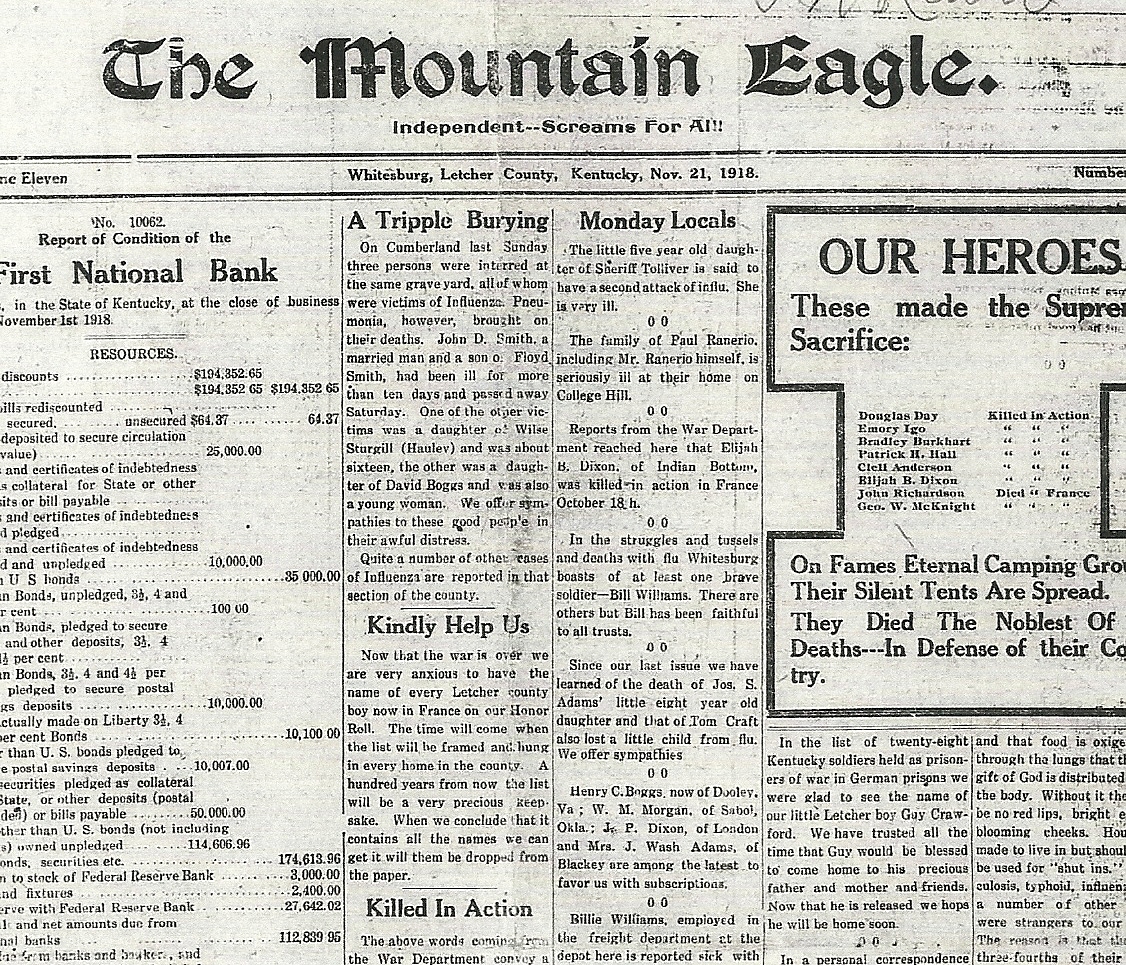 Other Kentucky newspapers have the same sad tidings:

There are so many more instances of Spanish Influenza and the horrors it inflicted on people world-wide. I wanted to share a few from the state of Kentucky. Until I did a little research I never realized how devastating this epidemic truly was. Do you have ancestors who died during this outbreak? As far as I know I don’t have direct ancestors, but there were probably distant cousins or aunts or uncles who lost their lives during this time period. Our lives are shaped not only by the people around us, but the history they live through, and so it continues back through the years. History is not a ‘dry as dust’ reading of dates and people and places far removed. History is what our ancestors lived through, and how it shaped their lives – for good or bad.