By Kentucky Kindred Genealogical Research on February 1, 2018 • ( Leave a comment )

Lawrence Tobin was born in County Kilkenny, Ireland, in 1817, the son of Lawrence and Kate Tobin.  He came to the United States in 1840.  Mary Leonard was born in Ireland in 1829, a daughter of John Leonard.  The couple married in 1847.  They began their Kentucky life together in Jefferson County.  In the 1850 census Lawrence was 34, a laborer; Mary was 22.  Son Richard, 2, born in Kentucky was listed, as well as Hugh Leonard, 19, born in Ireland – probably Mary’s brother. 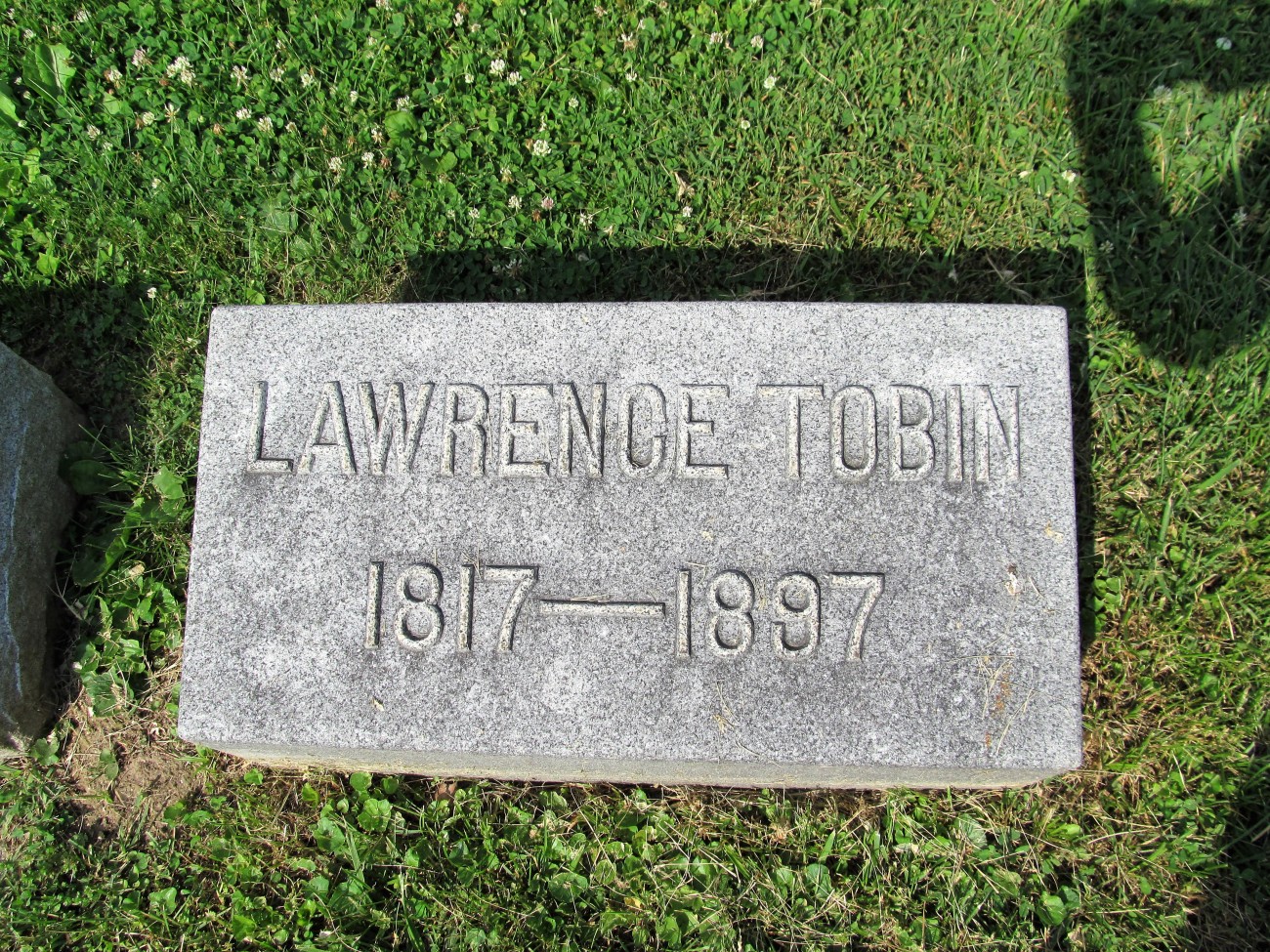 Just as the Angelus was ringing Sunday night from the church of which he was a member for many long years the spirit of Lawrence Tobin took flight.  Mr. Tobin was one of the best known Democrats in the state, having been one of the brave few who assembled in Louisville just after the war to reorganize the party in Kentucky.  He was born in 1815 in Ireland and came to this country when a young man, and had lived in Frankfort since about 1848.  He was elected city councilman several times and was on the state central committee for many years.  A wife and eight grown children survive him.

This sad announcement came as a shock to our city.  His death occurred at 11 o’clock on Thursday night, at Pope’s Sanitarium, in Louisville.  Dr. Tobin was the third son of the late Mr. Lawrence Tobin and Mrs. Mary Tobin.  he was 44 years of age, and was a physician of fine attainments and standing.  He had been physician at the local penitentiary for eight years in succession, and had also served in a like position under Governor Buckner.

For some time Dr. Tobin had been troubled with a painful intestinal disease, which baffled the skill of our local physicians, and had recourse to an operation for relief.  The operation was performed some ten days ago, and contrary to the hopes of the surgeons, he did not rally as fully as it was hoped he would.  On Thursday the case assumed a dangerous phase, and his brothers, Mr. Richard Tobin and Mr. John Tobin, were summoned to his bedside.  He sank rapidly, and the end came as stated.

Dr. Tobin was highly esteemed for his integrity and ability as a man and physician.

He leaves a wife and nine children, three brothers, three sisters and his aged mother to mourn his untimely end.

The remains were brought home yesterday and the funeral and burial will take place from the Church of the Good Shepherd today.  Rev. Father Thos. S. Major conducting the sad rites.

The sympathy of a wide circle of relatives and friends is extended to the bereft. 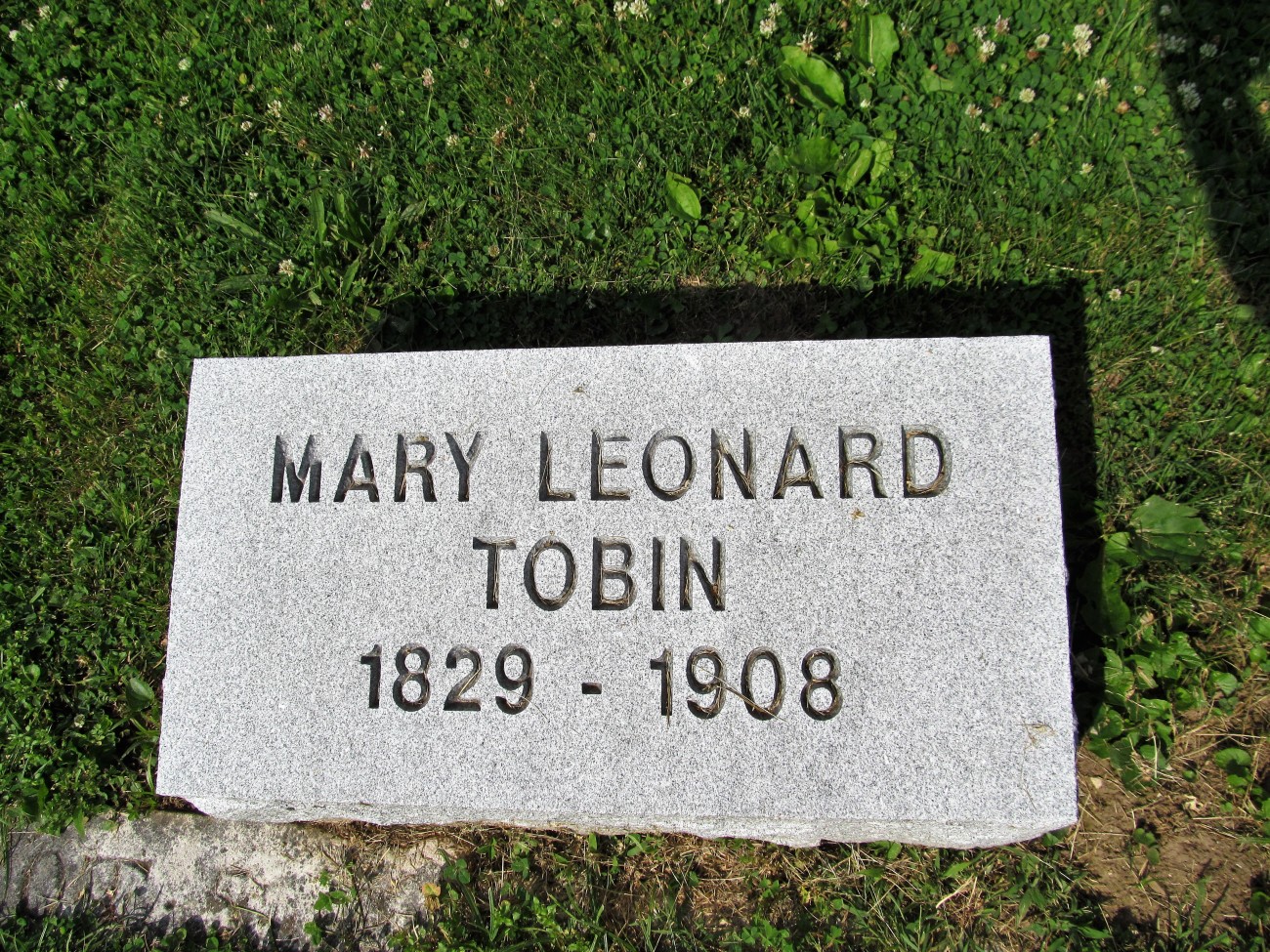 Mrs. Mary Leonard Tobin, widow of Lawrence Tobin, once one of the leading Democratic politicians in Kentucky, died here this morning at 7 o’clock at the age of 79 years.  Infirmities of old age caused her death.  Lawrence Tobin was once chairman of the Democratic State Committee and one of the prominent party leaders in the State.  One of his son, Dick Tobin, was Mayor of Frankfort several years ago. 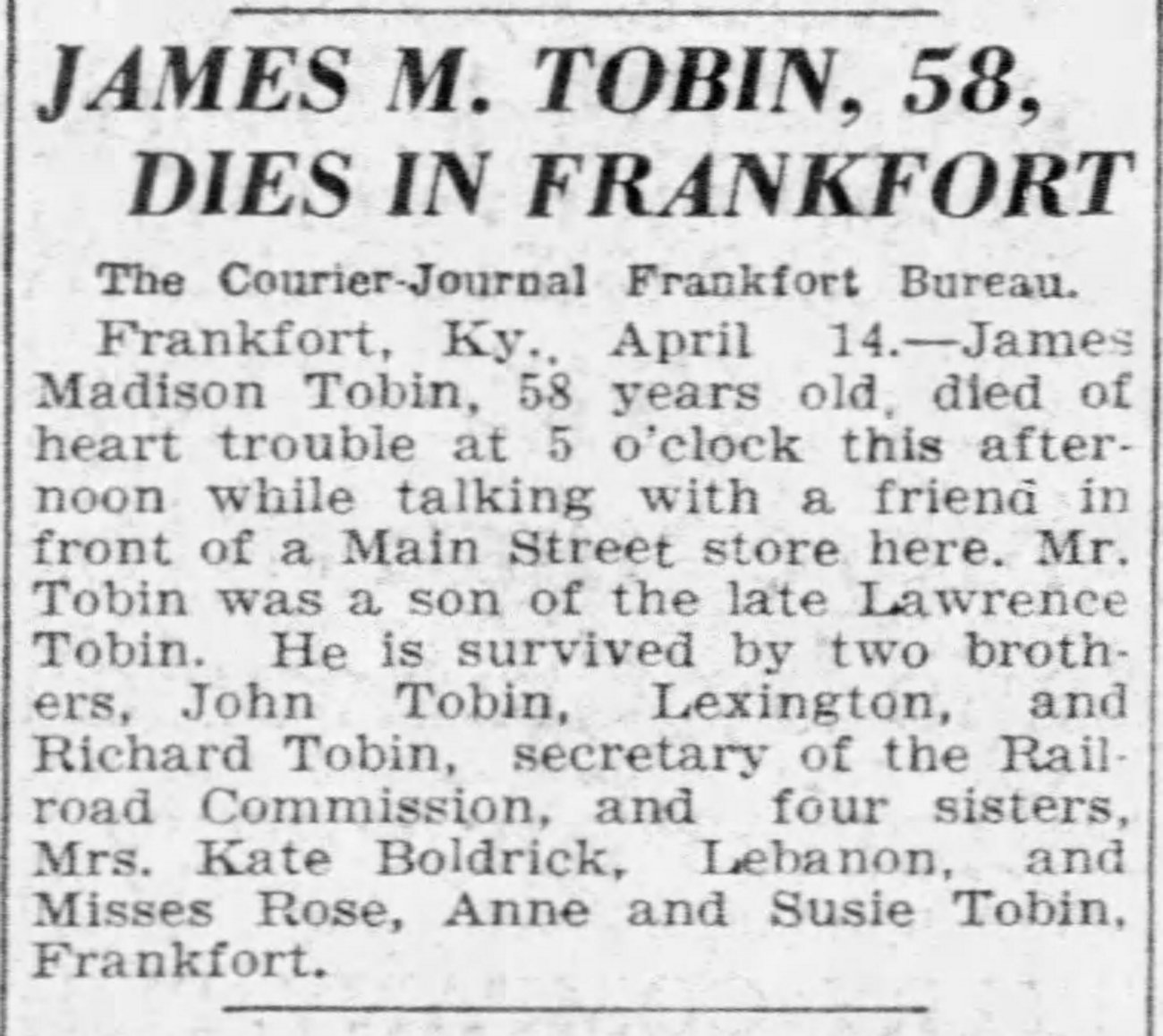 Frankfort, Ky., April 14 – James Madison Tobin, 58 years old, died of heart trouble at 5 o’clock this afternoon while talking with a friend in front of a Main Street store here.  Mr. Tobin was a son of the late Lawrence Tobin.  He is survived by two brothers, John Tobin, Lexington, and Richard Tobin, secretary of the Railroad Commission, and four sisters, Mrs. Kate Boldrick, Lebanon, and Misses Rose, Anne and Susie Tobin, Frankfort.

Frankfort, Ky., July 15 – Richard Tobin, 77 years old, former mayor of Frankfort and Secretary of the State Railroad Commission for the last eight years, died here this afternoon at his home in South Frankfort of a lingering illness.  Mr. Tobin had been active in State politics for many years and had a wide acquaintance among politicians throughout the State.  He was the first mayor of Frankfort to be chosen by Popular vote.  The mayor was formerly elected by the city council.

Mr. Tobin is survived by four daughters, Misses Lucille Tobin, Blanche Tobin, Anna Tobin and Mayme L. Tobin, and one son, Richard Tobin, Jr.  No funeral arrangements have been made.

Susan Tobin was born October 10, 1861, and died January 25, 1929, in Marion County, Kentucky, evidently visiting her sister, Mrs. Kate Boldrick.  The unmarried sisters were living at their old homeplace, 326 Main Street, in Frankfort.  Susan never married.  She was buried in Frankfort.

After the death of sister Susan, the unmarried sisters Annie and Rose Tobin made their home with their sister, Kate, in Marion County.  Annie Tobin was born February 28, 1872, and died May 28, 1931, and was buried in Frankfort.

Kate Tobin Boldrick lived longest of all her siblings.  She was married to George Boldrick.  They had a large family of nine children.  Kate was born April 26, 1853 (although the date given on her birth certificate was April 25, 1864; she was listed in the births of Franklin County for 1853) and died October 3, 1940.  She and her husband were buried in St. Augustine Cemetery in Lebanon, Marion County.