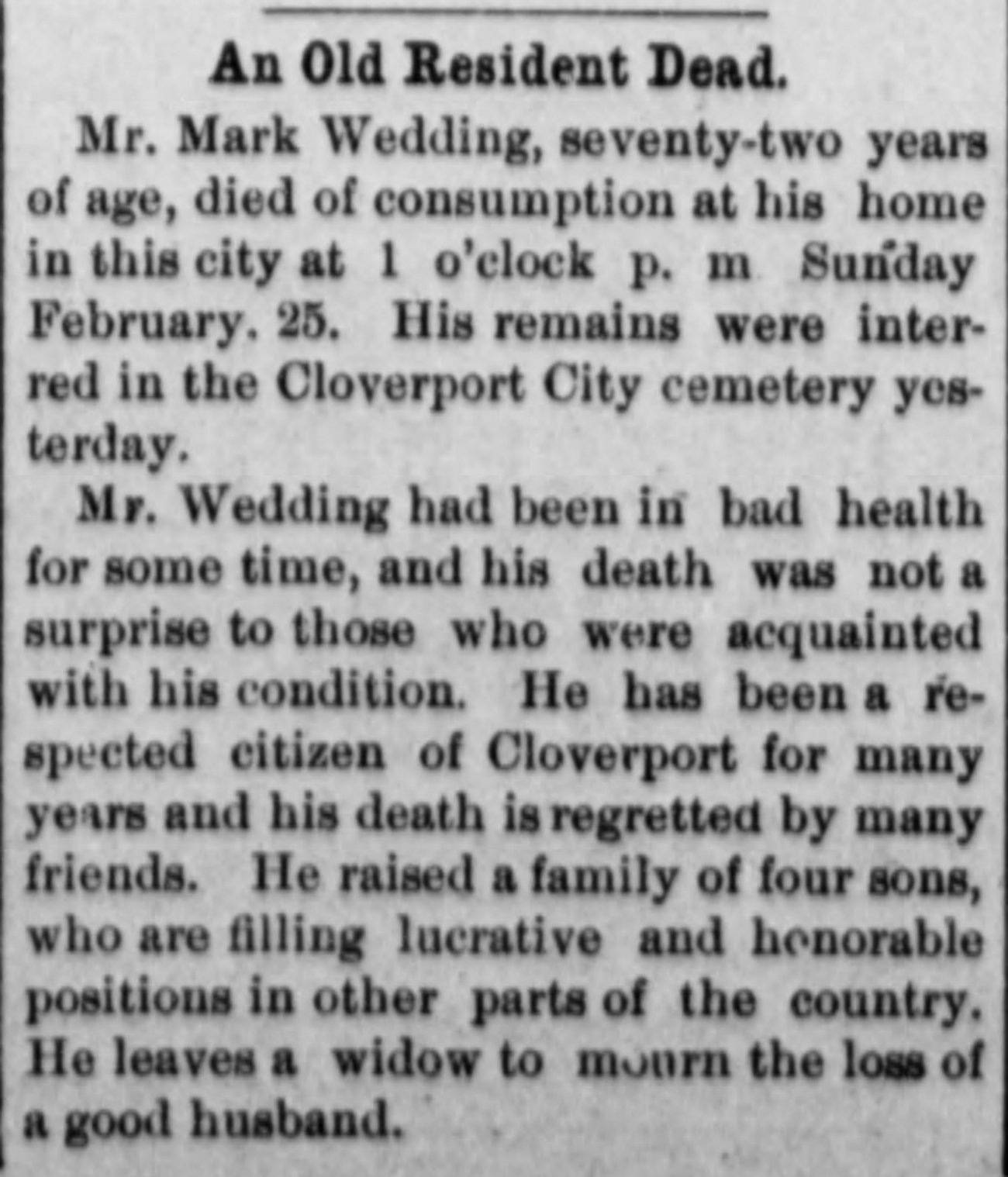 Mr. Mark Wedding, seventy-two years of age, died of consumption at his home in this city at 1 o’clock p.m. Sunday, February 25.  His remains were interred in the Cloverport City Cemetery yesterday.

Mr. Wedding had been in bad health for some time, and his death was not a surprise to those who were acquainted with his condition.  He has been a respected citizen of Cloverport for many years and his death is regretted by many friends.  He raised a family of four sons, who are filling lucrative and honorable positions in other parts of the country.  He leaves a widow to mourn the loss of a good husband. 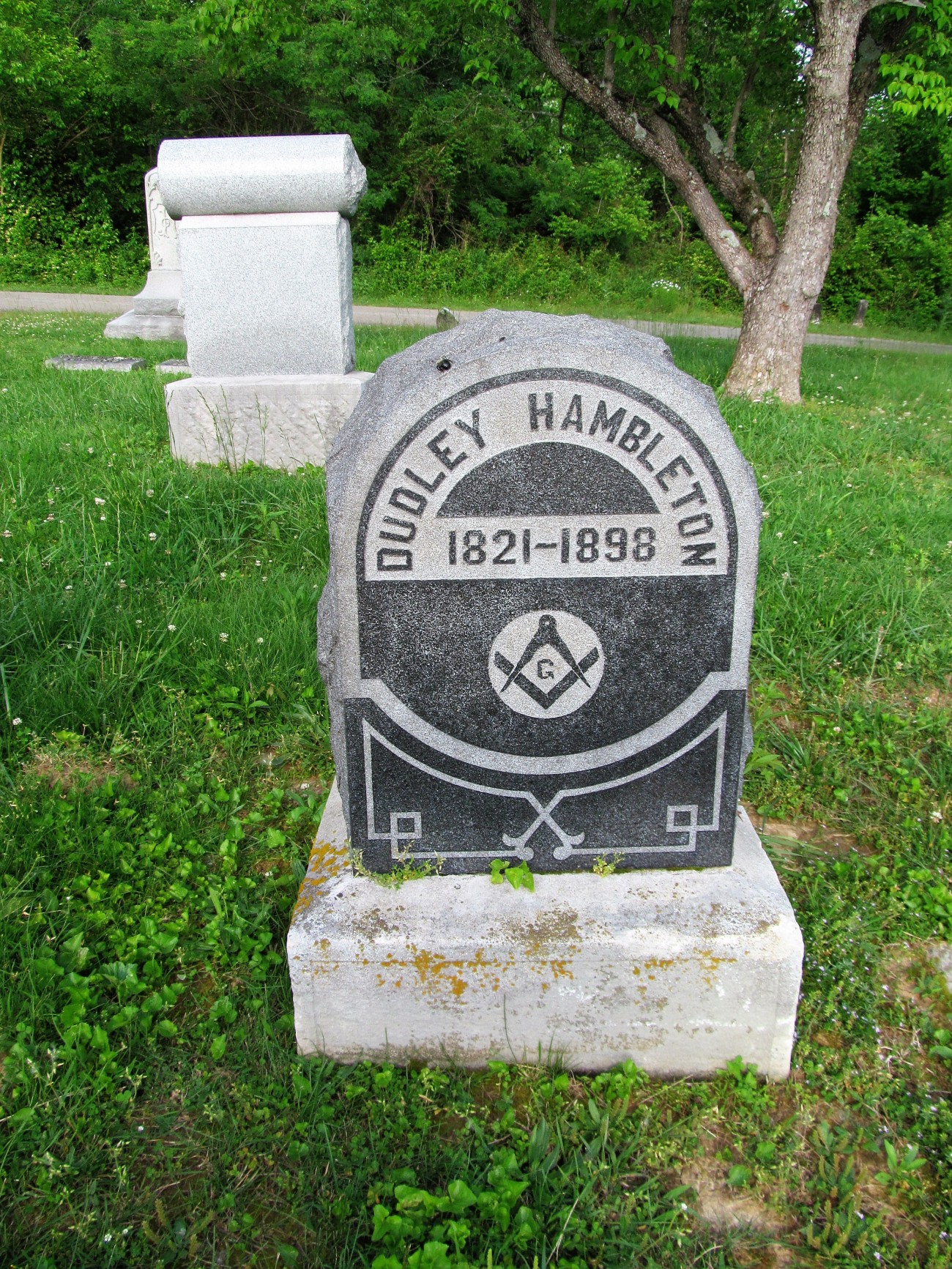 Represented Breckinridge Twice in the Legislature

Was a Consistent Member of the Baptist Church

Hon. Dudley Hambleton, a man who was loved by all who knew him, died early Tuesday morning.

For a week he has been hovering between life and death, and although his precarious condition was known to almost everyone in the county, the news of his final passing away came like a shock.

Hon. Dudley Hambleton has always been prominently identified with Cloverport.  He was born in this county, April 19, 1821.

He was married to Jane Watkins in November, 1843, and the following children were the result of the union:  James Hambleton, Samuel Hambleton, Mrs. Courtney Babbage, and Mrs. Martin S. Whitford, now living in England.

For many years Mr. Hambleton was regarded as a leading business man of Breckinridge County.  He practically bought all the tobacco that was brought to Cloverport for sale and was the largest buyer until the war came on.

At the close of the Civil War he purchased the A. A. Gordon farm at Holt’s paying $25,000 cash for it and engaged in farming.

He was always a man of affairs and stood high in the estimation of all who knew him.  He was twice elected to the legislature by the Democratic Party.

Hon. Dudley Hambleton was one of the best men Cloverport ever had.  During the days of his prosperity he was known as the young man’s friend and his purse was always ready to back some poor young fellow struggling for a foothold on the ladder to success.  He was charitable to a fault.

His funeral took place today and was largely attended, the remains being interred according to the rites of Masonry.

Julius Hardin Has Been Laid to Rest

Was a Prominent Democratic Worker

A Man of Strong Convictions and Fine Character

By the death of Julius Hardin, Breckinridge County has been deprived of one of her most substantial citizens.

The deceased had been suffering for some time with a carbuncle on the back of his neck and his death was looked for daily for a week or more before the end came.

He passed away Friday, September 23rd, with hardly a struggle.

Julius Hardin was born in this county October 9, 1846.

He was a man of strong character and firm convictions.  He took an active interest in politics during his life and for years was regarded as one of the staunchest Democrats in the county.

While he was a hard worker for party success he never sought office or preferment of any kind.

He was honest, sincere and his agreeable personality won for him a host of warm friends.

He was a scion of the noted Hardin family, coming from the pioneer stock that settled Breckinridge County over a century ago.

The deceased leaves a wife and four children to mourn his loss.

The funeral took place Saturday, the services being conducted by Rev. Sneed, of Hardinsburg, who preached a sermon eloquent in its sympathy for the bereaved wife and children and rich with its tributes to the character of the dead.

The remains were interred in the Cloverport Cemetery and were followed to their last resting place by one of the largest funeral corteges that has ever been seen in the city.

The News with the whole community extends sympathy to the bereaved family. 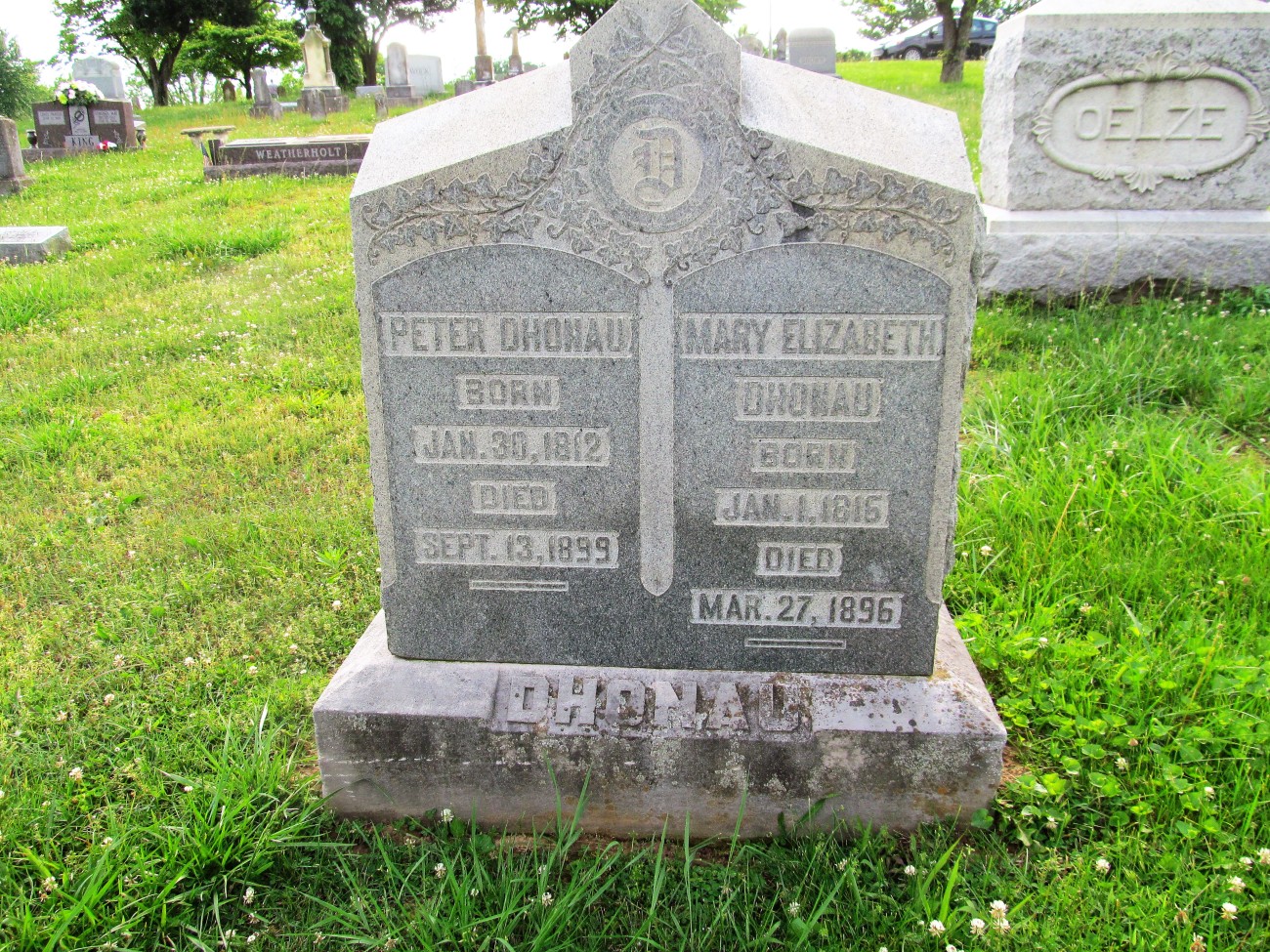 An Old Resident of the County Passes Away

Mr. Peter Dhonau, one of the county’s oldest citizens, died at his home near Balltown last Wednesday.  He had not been confined to his bed and death was due to the sudden giving away of his constitution.

Mr. Dhonau was born in Sobenheim, Prussia, January, 1813.  He came to this country in 1844, and located at Rome, Indiana, on a farm.  He continued farming until the year of 1869, when he moved to this part of Kentucky where he has resided ever since.

His most estimable wife departed this life in March, 1896, leaving eleven children to mourn her loss.  Two died in infancy, one at nine years and one at mature age.  Seven children are still living who are, Mrs. Michael Hamman, Mrs. Phillip Dick, Mrs. Charles Fuchs, Mrs. William Sanders, Miss Harriet Dhonau and William and Albert Dhonau.  There are twenty-seven grand-children and twelve great-grandchildren.

Mr. Dhonau was probably one of Breckenridge County’s most prosperous farmers, and was well liked by everyone.  He was a consistent member of the Presbyterian Church.  His remains were laid to rest in the cemetery near Rome, Indiana.  [Although this gravestone leads us to believe he was buried in Cloverport Cemetery.]