1846 Will of William A. Jones – Livingston County

By Kentucky Kindred Genealogical Research on August 10, 2018 • ( Leave a comment )

William A. Jones is the fourth great-grandfather of my husband.  Unfortunately, I do not know the name of his first wife.  Ritchey descends from his son Thomas who married Rachel Margaret Walker.

This is a fantastic will because it names all the children – and tells us the wife, Mariah Jones, is a second wife.  Why didn’t everyone be so thoughtful? 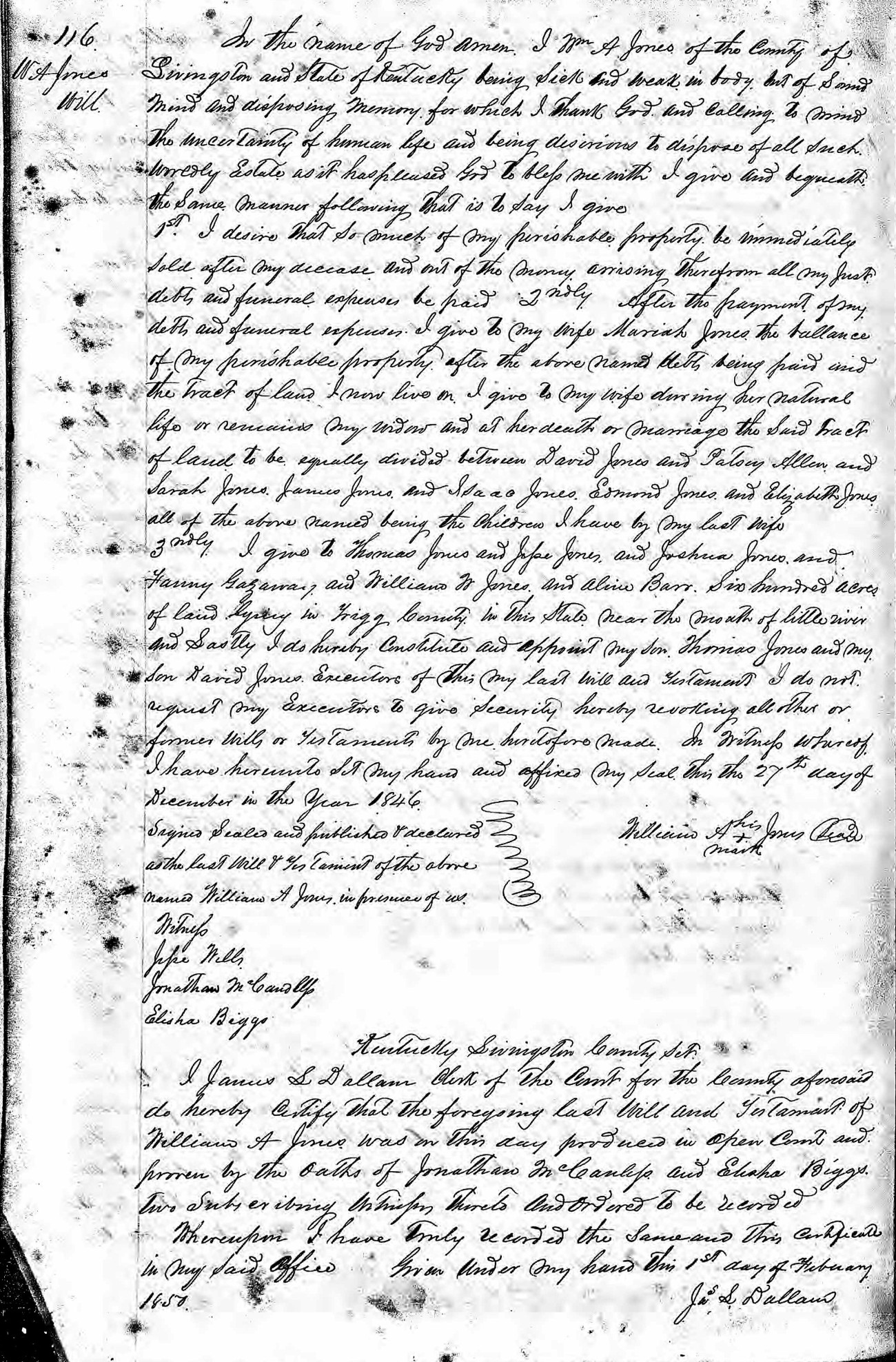 Livingston County Will Book B, Page 117

In the name of God, amen.  I, William A. Jones, of the County of Livingston and State of Kentucky, being sick and weak in body, but of sound mind and disposing memory, for which I thank God, and calling to mind the uncertainty of human life and being desirous to dispose of all such worldly estate as it has pleased God to bless me with, I give and bequeath the same manner following, that is to say I give –

1st.  I desire that so much of my perishable property to be immediately sold after my decease and out of the money arising therefrom all my just debts and funeral expenses be paid.

2nd.  After the payment of my debts and funeral expenses, I give to my wife, Mariah Jones, the balance of my perishable property after the above named debts being paid and the tract of land I now live on I give to my wife during her natural life or remains my widow, and at her death or marriage the said tract of land to be equally divided between David Jones and Patsy Allen and Sarah Jones, James Jones and Isaac Jones, Edmond Jones and Elizabeth Jones, all of the above being the children I have by my last wife.

3rd.  I give to Thomas Jones and Jesse Jones and Joshua Jones and Fanny Gazaway and William W. Jones and Olive Barr, six hundred acres of land lying in Trigg County in this state, near the mouth of Little River.

And lastly, I do hereby constitute and appoint my son Thomas Jones and my son David Jones executors of this, my last will and testament.  I do not request my executors to give security, hereby revoking all other or former wills or testaments by me heretofore made.  In witness whereof, I have hereunto set my hand and affixed my seal this the 27th day of December in the year 1846.

Signed, sealed and published and declared as the last will and testament of the above-named William A. Jones, in presence of us.  Witness, Jesse Wills, Jonathan McCandless, Elisha Biggs.

I, James S. Dallam, Clerk of the Court for the County aforesaid, hereby certify that the foregoing last will and testament of William A. Jones was on this day produced in open court and proven by the oaths of Jonathan McCandless and Elisha Biggs, two subscribing witnesses thereto and ordered to be recorded.

Thereupon I have truly recorded the same and this certificate in my said office.  Given under my hand this 1st day of February 1850.