By Kentucky Kindred Genealogical Research on March 8, 2019 • ( Leave a comment )

On a quiet small rolling hill in western Boyle County, on the Marion County line, sits Old Union Cemetery.  It is located in what is known as the Doctors Fork Community.

I searched Civil War records – Isaac was on the line of being old enough to fight – but could find no information.

The Kentucky Advocate of March 11, 1895, tells of a birthday dinner for Silas Figg, Wednesday, February 27th, to celebrate his eighty-third birthday.  ‘Greatly to his surprise he was invited to a sumptuous dinner prepared by his daughter, Mrs. Isaac M. Gray, of Boyle County, and his granddaughter, Mrs. Mattie Hourigan, of Marion County.  The dinner was prepared at the homes of the two ladies and taken to his home and spread on the table in his dining room.  Those present to partake of the birthday dinner and extend to Mr. Figg and wife congratulations were:  Debo Hourigan, and wife, Mattie, Miss Winnie Hourigan, all of Marion, and Isaac M. Gray and wife, of Boyle.  The old father very much appreciated the surprise.’

It can truly be said of the passing of Mrs. Mamie Figg Gray, wife of Mrs. Isaac M. Gray, that a mother in Israel has gone to her reward.  Her death occurred at her late home near Aliceton at an early hour last Sunday morning.

Mrs. Gray was a daughter of the late Mr. and Mrs. Silas Figg, of Perryville, was born in that community sixty-seven years ago.  At the age of seventeen she and Mr. Isaac M. Gray were united in marriage.  They had intended celebrating their golden wedding anniversary last November, the approaching death of a near relative caused them to abandon what promised to be a happy (and as all know) an unusual event.  Mrs. Gray was one of the most beloved women in the county.  In early life she confessed her Savior and united with the Baptist church.  Her life was ever that of a devout Christian, she was never strong physically, however, this did not prevent her from leading an active life, neither did it limit her devotion to the home, to her relatives and the community.  She was a good woman, a good wife and mother.  The husband and surviving children are now bowed down with grief, these are hours of dire distress to them.  The beautiful life she lived, her loving Christian character, her expressions of faith and confidence in the future, should in some measure assuage the grief of the loved ones, whose hearts are crushed by this dispensation of Providence.

A neighbor said of Mrs. Gray to the writer, “She was one of the best women, she and her husband were the happiest and most devoted couple I ever knew.  Her death brings sorrow to all who knew her.”

Mrs. Gray is survived by her husband, Mr. I. M. Gray, and four children:  Mrs. A. L. Harmon, of Perryville, Mrs. Thomas Sparrow, of Stewart, Kentucky, Mrs. Robert Mayes, who resides with her parents and Mr. Ira Gray, of Chattanooga, Tennessee.  All were with her during her late illness and at time of death and ministered to her every want.  To these, other relatives and friends, there goes out the deepest possible sympathy in this irreparable bereavement.  Dr. B. F. Adkins, her former pastor, conducted the funeral services at Old Union Church this (Tuesday) morning at 11 o’clock in the presence of one of the largest crowds that ever gathered at that church.  The large crowd gathered was but mute evidence of the sorrow, love and esteem entertained for one of the noblest of earth.  Interment in the cemetery near the church.

After the death of his wife Isaac lived with his daughter and son-in-law, Robert and Mattie Mayes.  The couple had three children, sons Leslie and Robert, and daughter Mary.  Isaac lived another 14 years, to the age of 89, dying December 18, 1932.  He was buried beside his wife of fifty years.

Isaac Montgomery Gray, 89 years old, retired farmer, died at 7:15 o’clock last night at the home of his daughter, Mrs. R. C. Mayes, at Perryville.  Funeral services will be held at 11 o’clock Tuesday morning at the Old Union Baptist Church, of which he was deacon and clerk sixty-one years.  Burial will be in the family graveyard on the farm where he was born, at Doctor’s Fork, Boyle County.

Mr. Gray was a member of the Perryville Battlefield Commission, the membership of which was identical with that of the voluntary committee formed in 1919 to obtain the monument to Union soldiers which was dedicated on the Perryville battlefield on October 8, 1931.

He is survived by three daughters, Mrs. A. L. Harmon, Junction City; Mrs. Thomas Sparrow, Harrodsburg, and Mrs. Mayes; a son, R. L. Gray, Southern Railway Agent at Moreland, Lincoln County, and a sister, Mrs. Sallie Wade, Perryville.  He was one of Boyle County’s best citizens and had spent his life in the west end of the county. 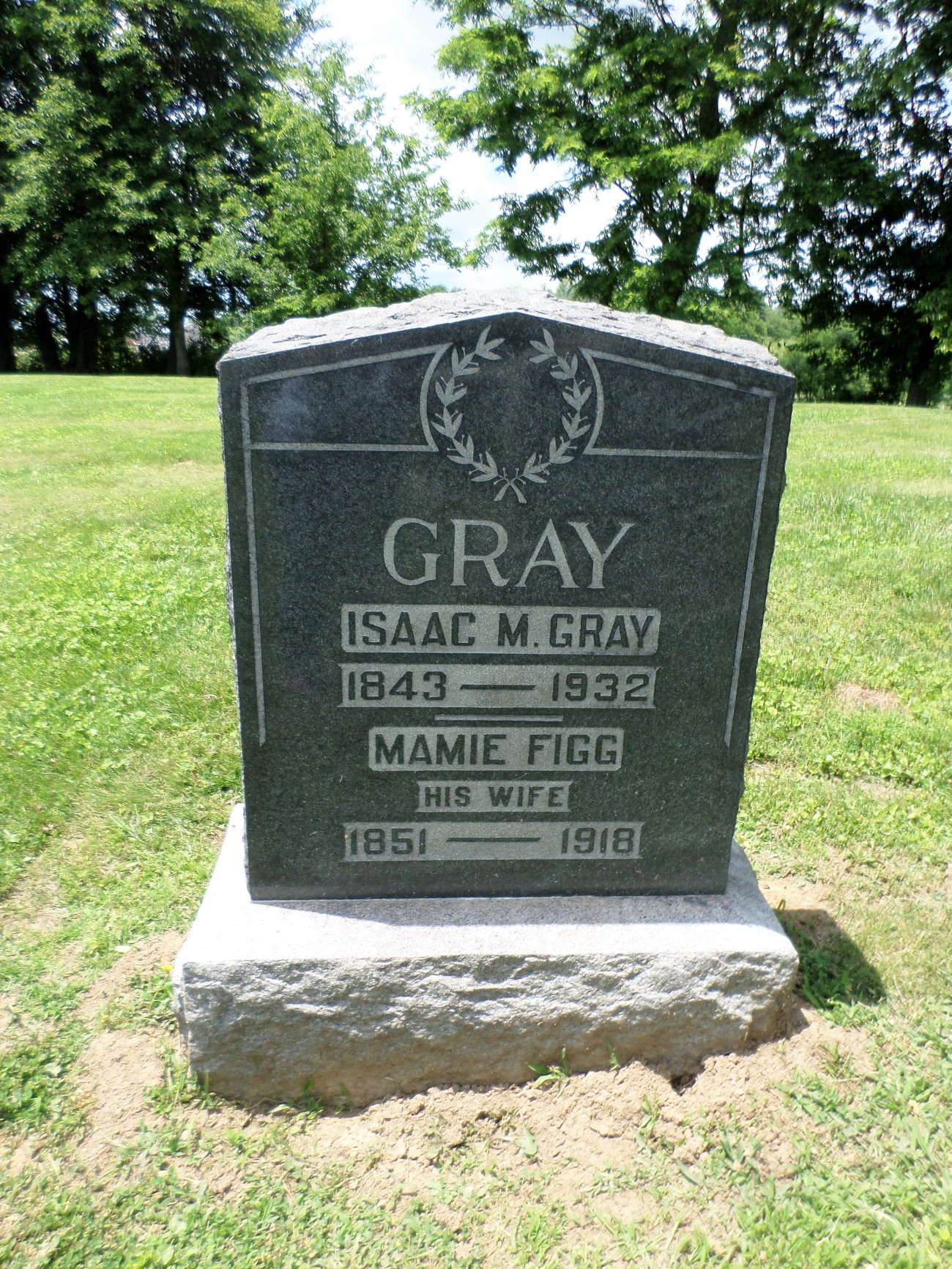