By Kentucky Kindred Genealogical Research on February 15, 2018 • ( Leave a comment )

Dr. Bryan R. Young was actually born in Nelson County, rather than Washington County as stated.  He was a son of John Young and Elizabeth Singleton.

A man of many talents and one of the earliest doctors in Elizabethtown, Doctor Bryan R. Young was born in Bloomfield, Washington County, January 14, 1800.  After local school, he studied medicine under his brother, Dr. William S. Young in Elizabethtown, in 1818 and began practice as a partner, continuing until the death of his brother in 1827.  He then practiced alone and developed a fine ability as a surgeon.

His practice was very extensive in the county.  He later associated with Dr. Harvey Slaughter and Dr. Ambrose E. Geohegan in the manufacture and sale of medicines.  He owned a large farm on Muldraugh’s Hill and was the owner of a large number of slaves.  He was much interested in horticulture and specialized in fruit growing.  He spent much time on his farm.  In later years he returned to Elizabethtown but confined his practice to only a few selected patients.

Very active in public affairs and politics, Dr. Young was elected to the State Legislature in 1839, 1861, 1863, 1865 and 1867, and was a member of Congress from this district in 1845/47.  Mr. H. A. Sommers in his History of Elizabethtown described Dr. Young as follows – ‘Among the vigorous types of the Anglo-Saxon race which helped develop this great county of ours, there was no better specimen than Dr. Bryan R. Young.  Dr. Young was a man of fine education and rare mental endowments.’  Another described him as being a very matter-of-fact person, dignified and kind, but firm.

Dr. Young married Louisa Sneed of Frankfort, and to them were born two daughters, both dying in infancy.  He was active in the Masonic fraternity and rose to the honor of being Grand Master of the order in the state in 1845.

Stories are told of Dr. Young’s plan for increasing his fortune, one being the importation of a species of duck from Canada.  On that project he lost considerable.  Another effort involved the leasing of 3,000 acres of woodland in Grayson County, on which he placed a large number of hogs, with the intention of having them fed and fattened on acorns.  Many of the hogs were stolen and again his vision of large gain went astray.

Mr. Sommers in his History of Elizabethtown, tells of Dr. Young engaging in a street duel with his brother-in-law and of shooting him down (not fatally) and of the son, John Young Brown, firing a pistol at his uncle, as Dr. Young stood in the doorway of his office on the Public Square.  Dr. Young is said to have told some of the witnesses on the scene, ‘Take the young man away.  I do not want to kill him, as he is  my nephew.’

Dr. Young’s fortune slipped away and in his late years he was cared for by ‘Aunt Beck’ Hill and the Masons of the town.  He was converted to the Catholic faith some time prior to his death, May 13, 1882.  He died in a small office in what was known as the Haycraft house (the Benjamin Helm site at the corner of North Main and Poplar Streets, in more recent years as the Hardin Jones property).  His funeral was conducted by Father Cook, of St. James Church.  The officers of the Grand Lodge of Masons came to Elizabethtown and buried him in the City Cemetery. 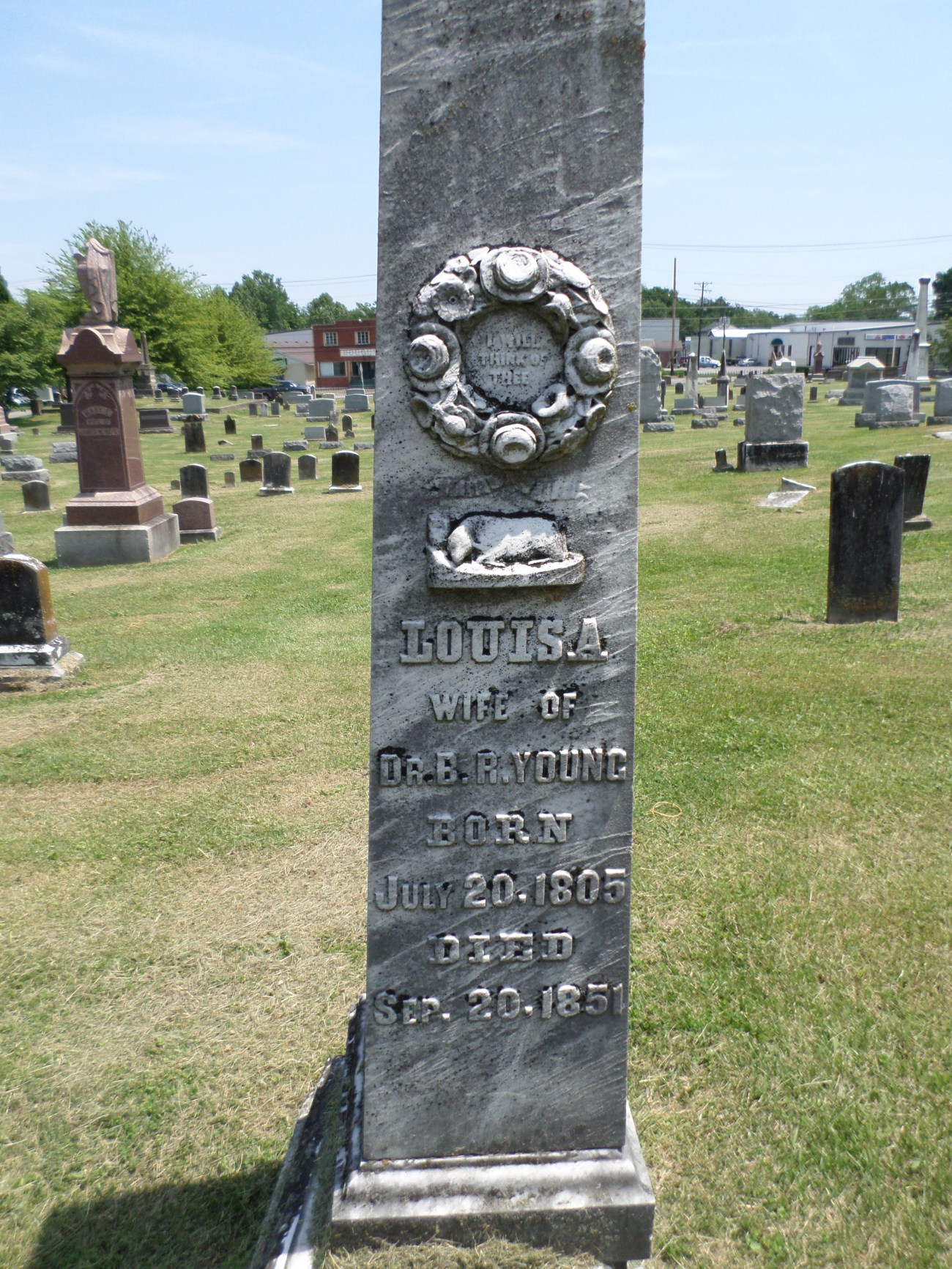