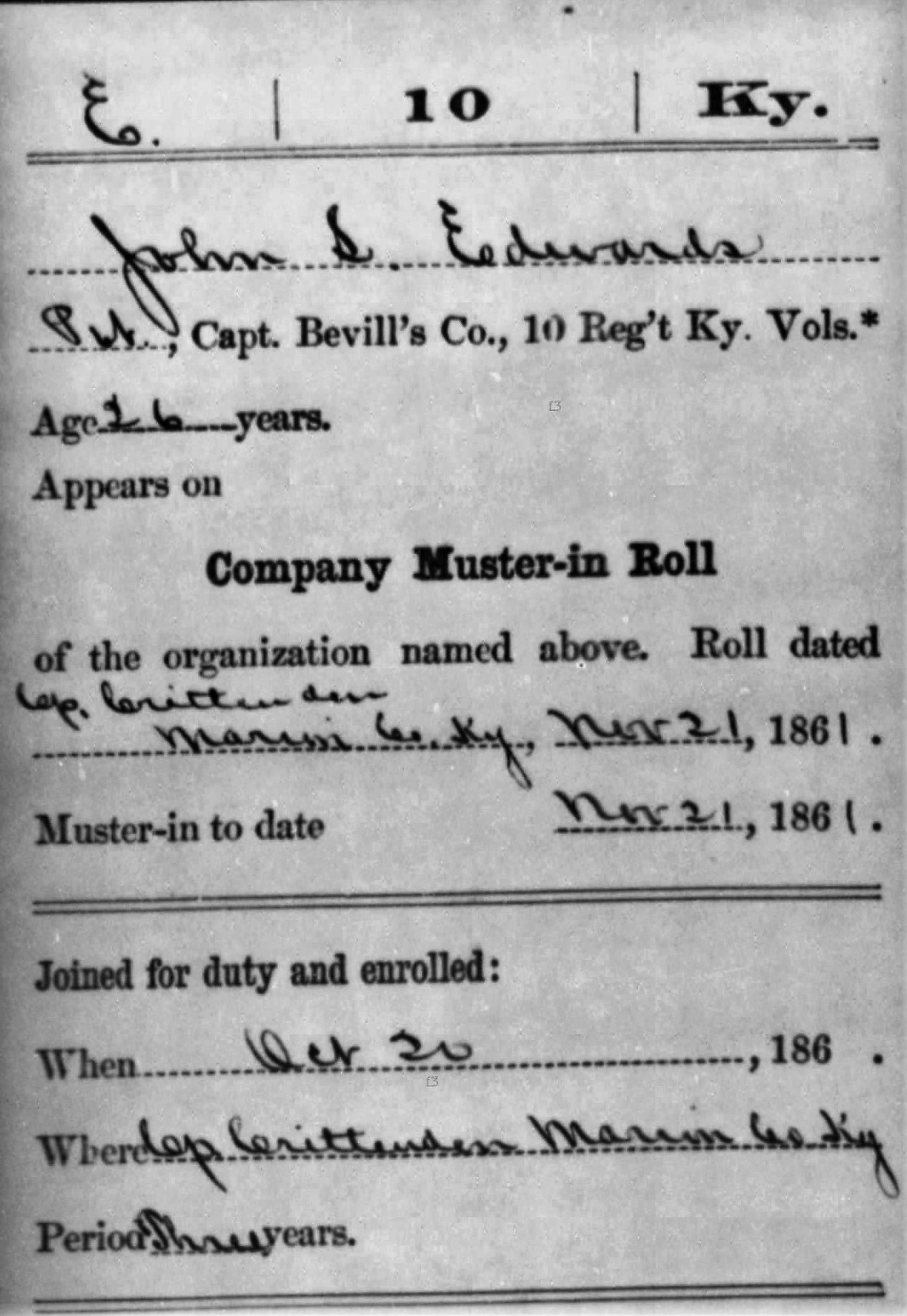 Two brothers, John L. and William M. Edwards entered the Union army November 21, 1861, at Lebanon, Marion County.  They entered service as privates, and were in Captain Bevill’s Company E, 10th Regiment of the Kentucky Volunteers.  John was 26 and William was 21.  The two brothers were sons of Jonathan and Nancy Linton Edwards.  The other five children were Alfred, Lucretia, Susan, Edward and Benjamin.  Their parents were part of the Linton/Edwards move to Kentucky in 1816-1818. 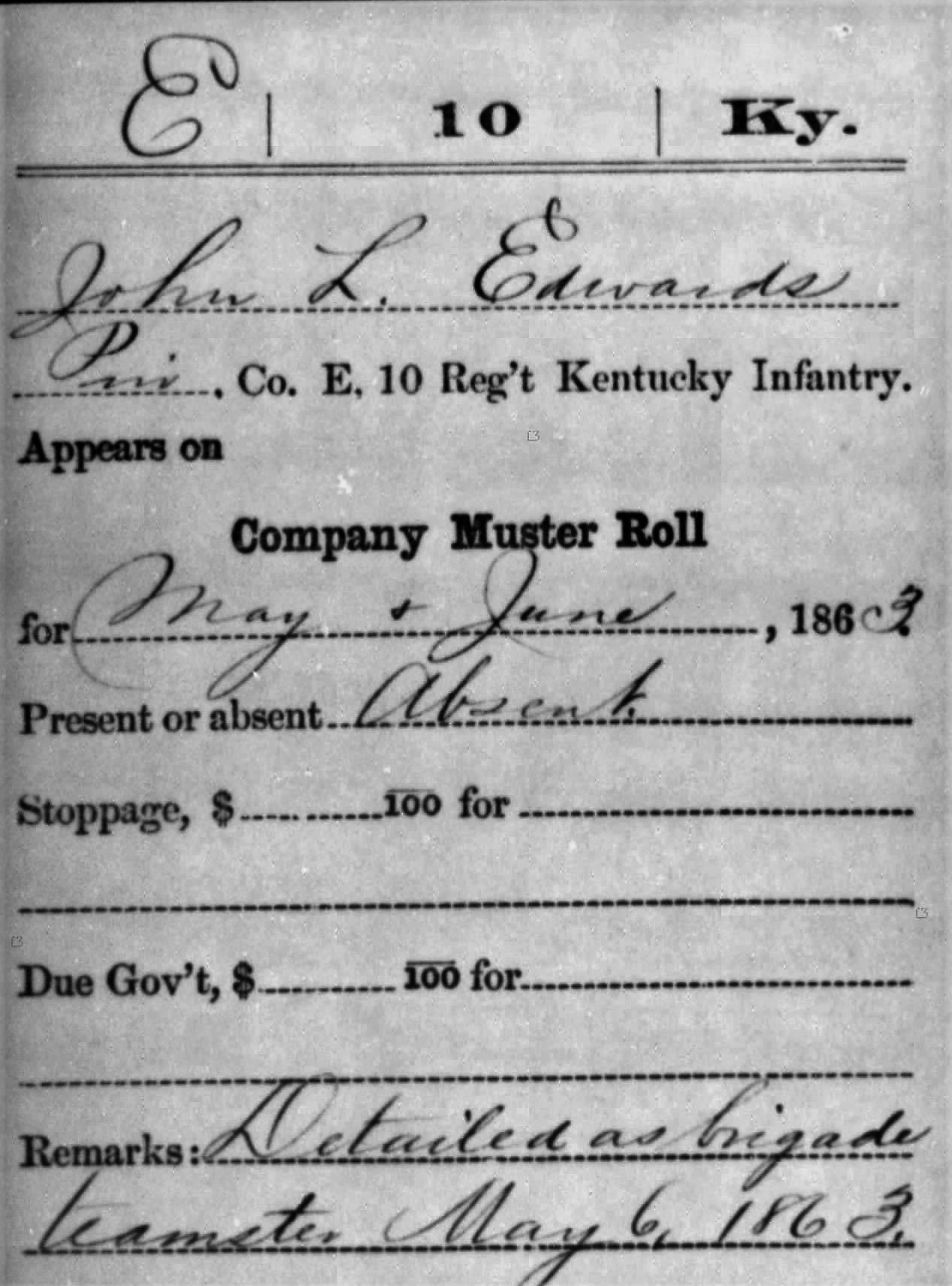 During the Civil War John and William remained in the same unit.  May 6, 1863, John was detailed as a brigade teamster. 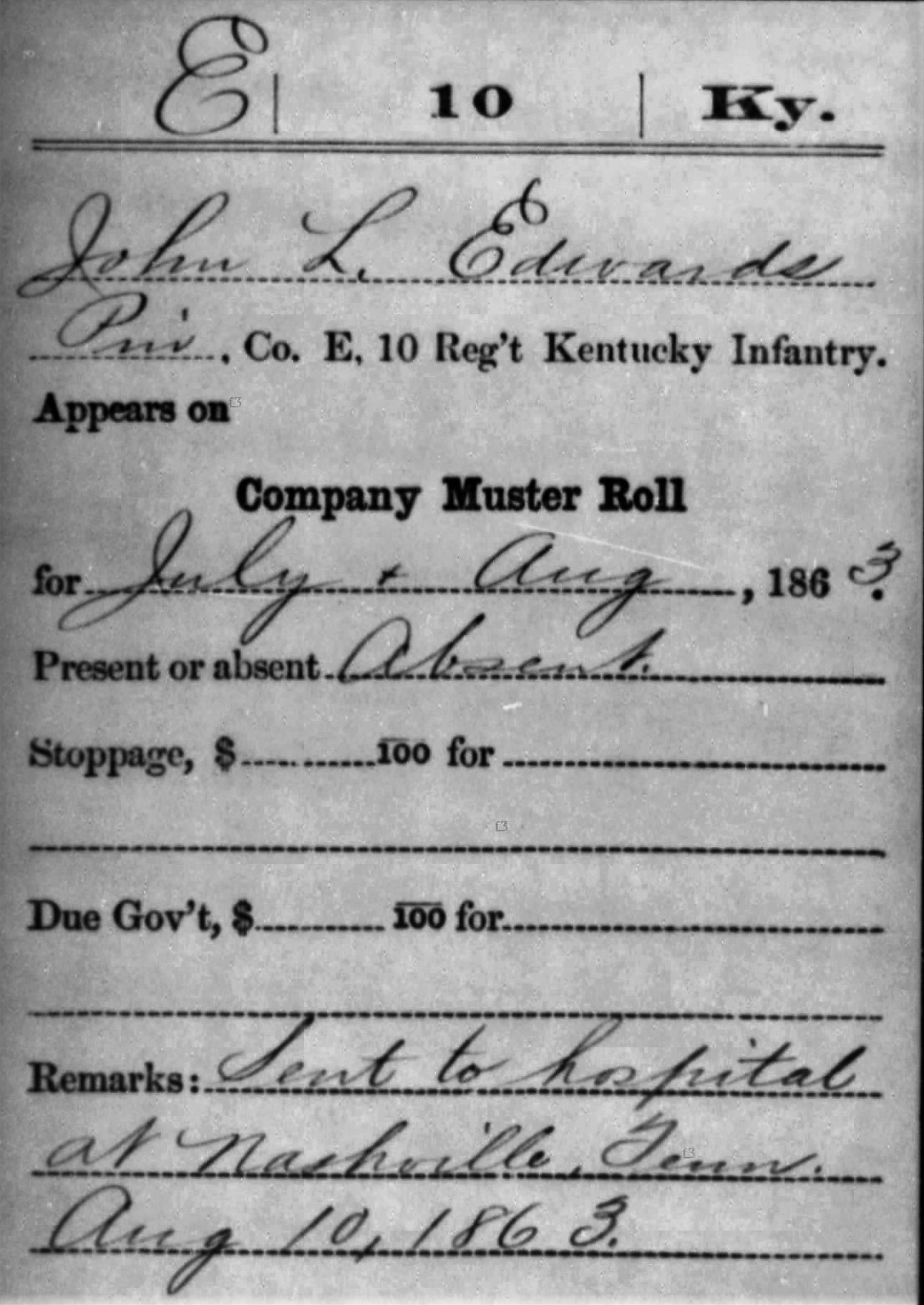 August 10, 1863 he was sent to a hospital at Nashville, Tennessee, and was later moved to the hospital in Louisville, Kentucky.  This was during the occupation of middle Tennessee. 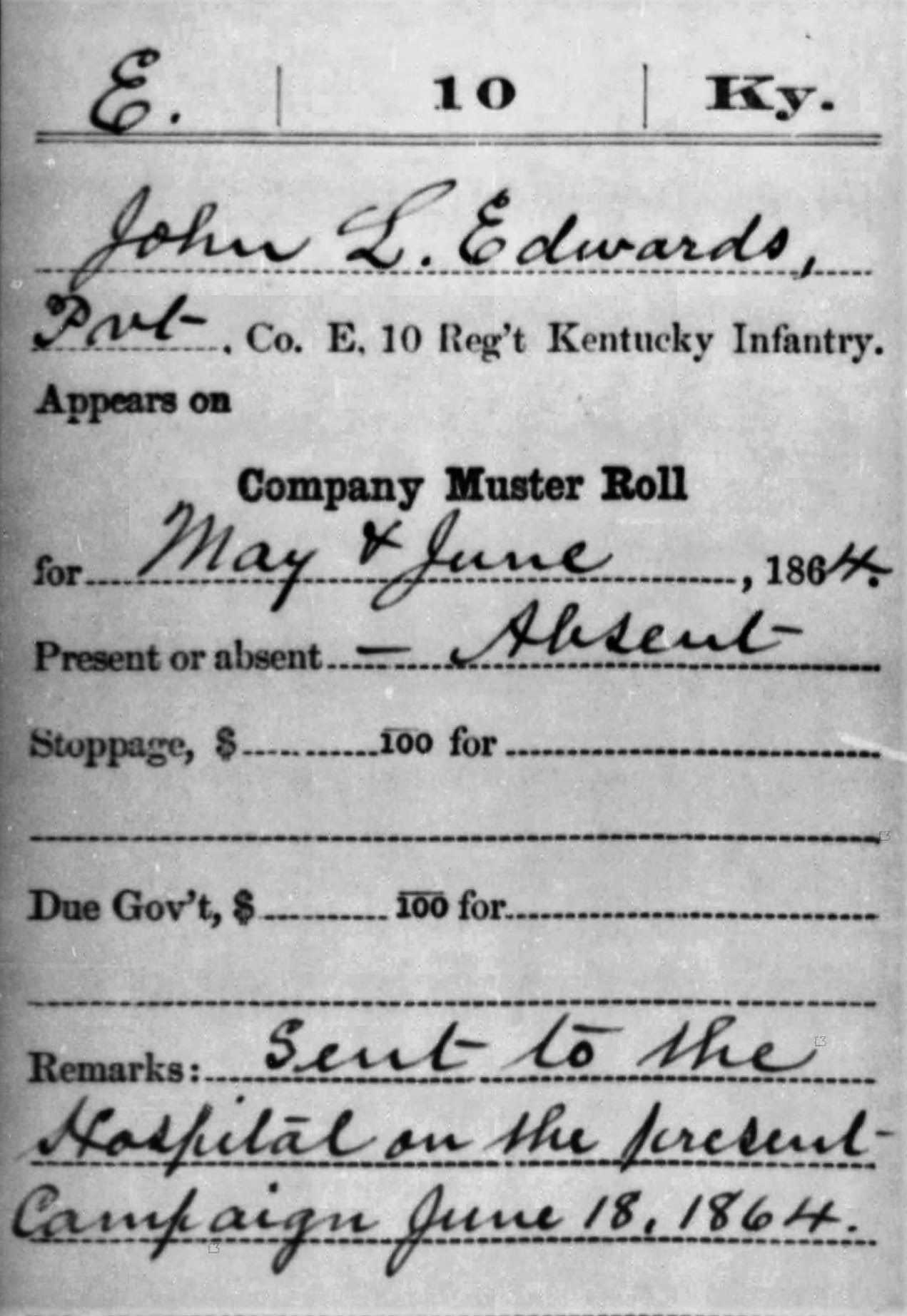 Again, June 16, 1864, he was sent to the hospital in the present campaign.  This was during the Battle of Kennesaw Mountain in Marietta, Georgia. 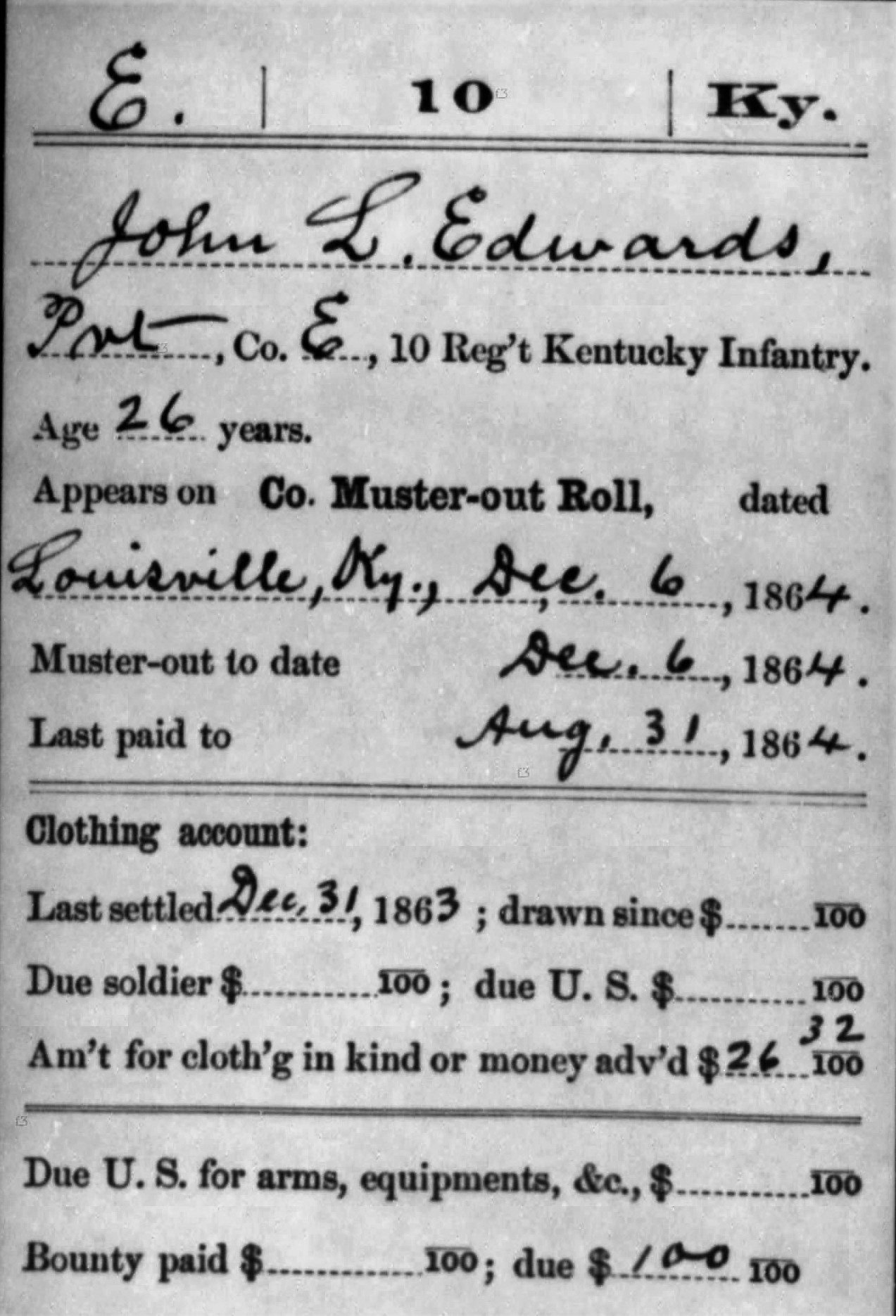 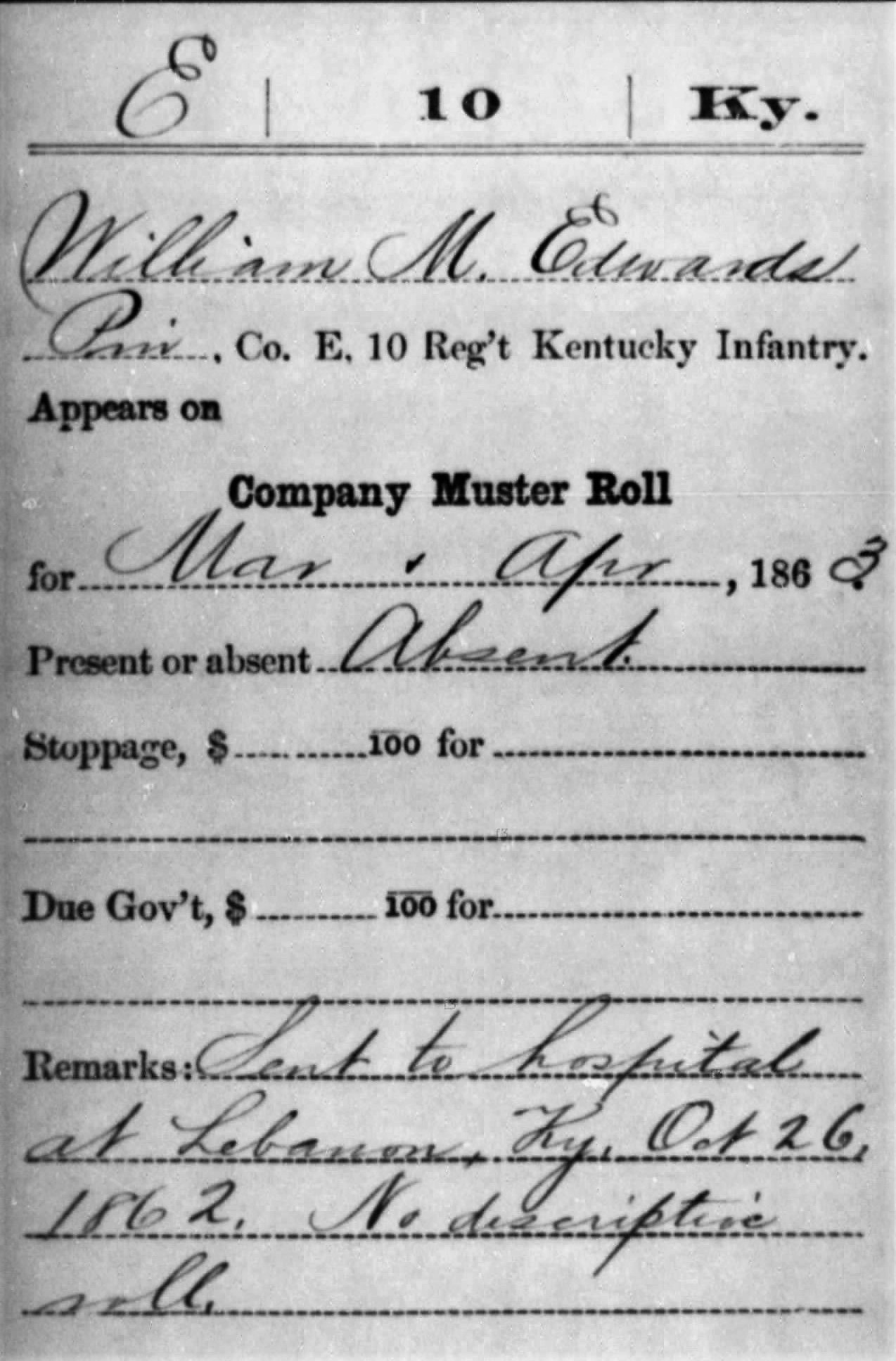 William Edwards was sent to the hospital at Lebanon, Kentucky, October 26, 1862.  It is very likely William was wounded during the Battle of Perryville earlier in the month, and was sent to recuperate in nearby Lebanon. 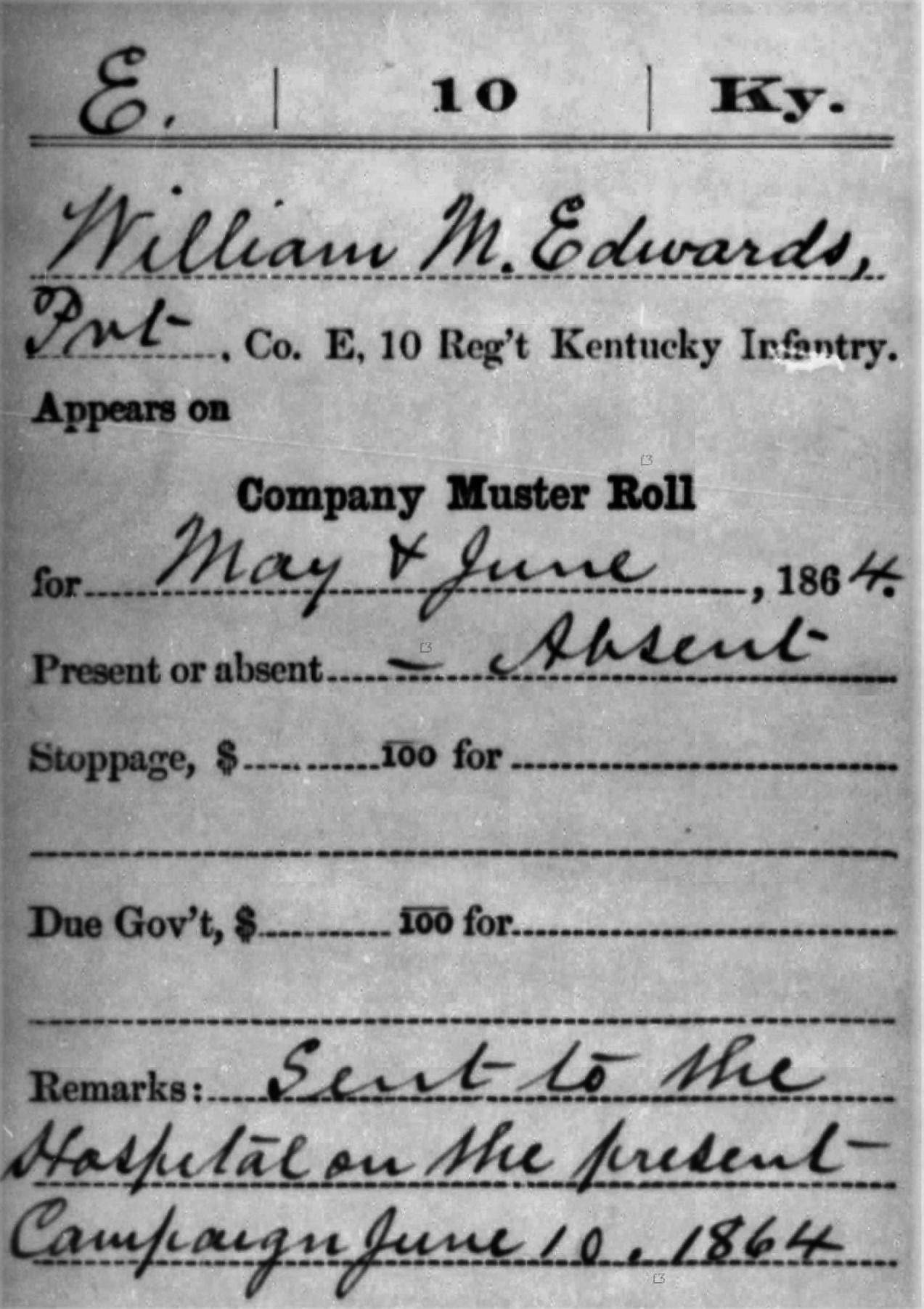 On June 10, 1864, he was sent to the hospital on the present campaign, again at Kennesaw Mountain. 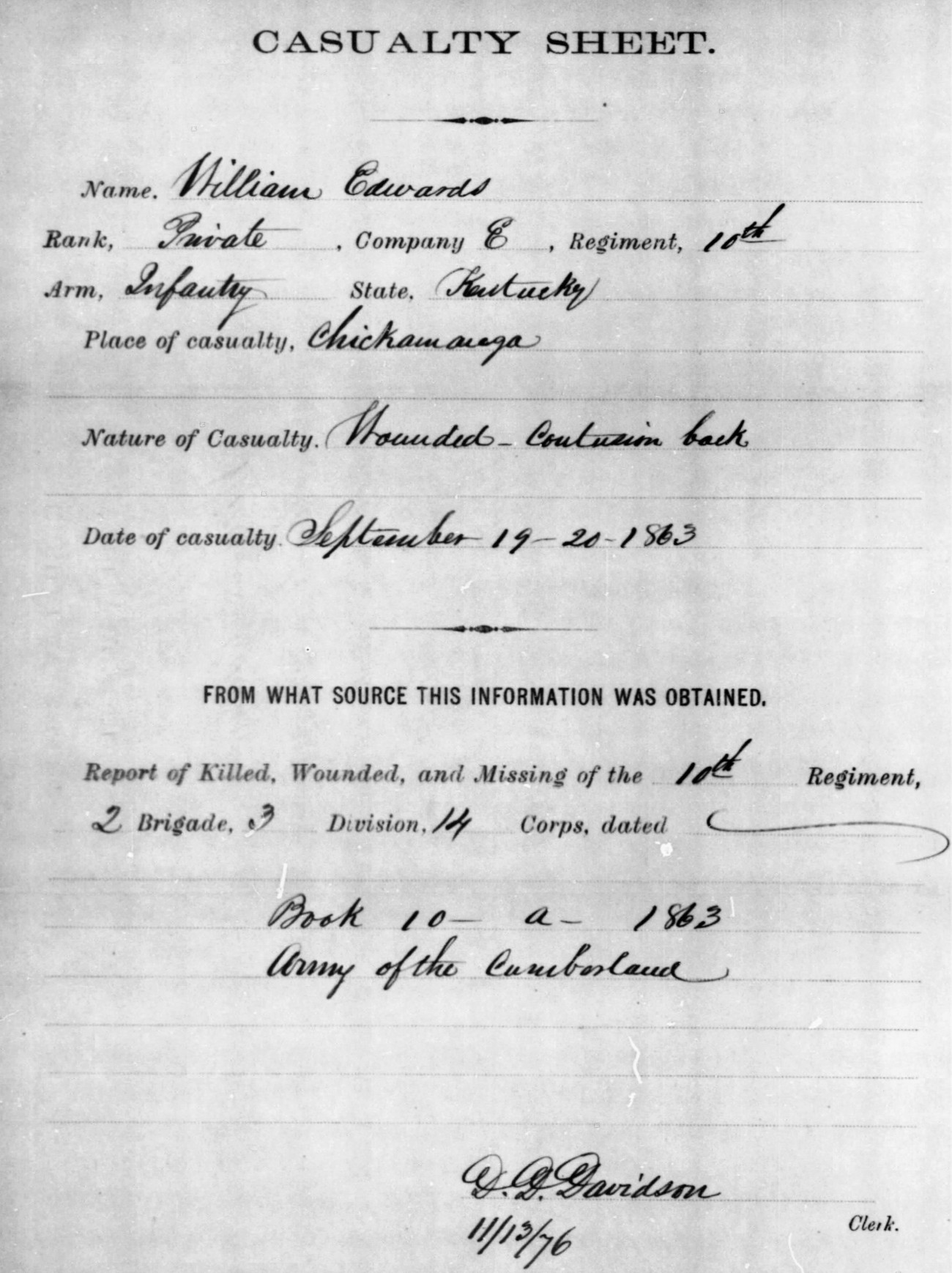 September 19-20, 1863, during the Battle of Chickamauga, William was wounded, a contusion in the back.  He was mustered-out the same date as his brother, August 6, 1864, and was due $100 plus $40.62 for clothing in kind.  I am sure John was horribly worried when William was wounded and taken prisoner by John Hunt Morgan. 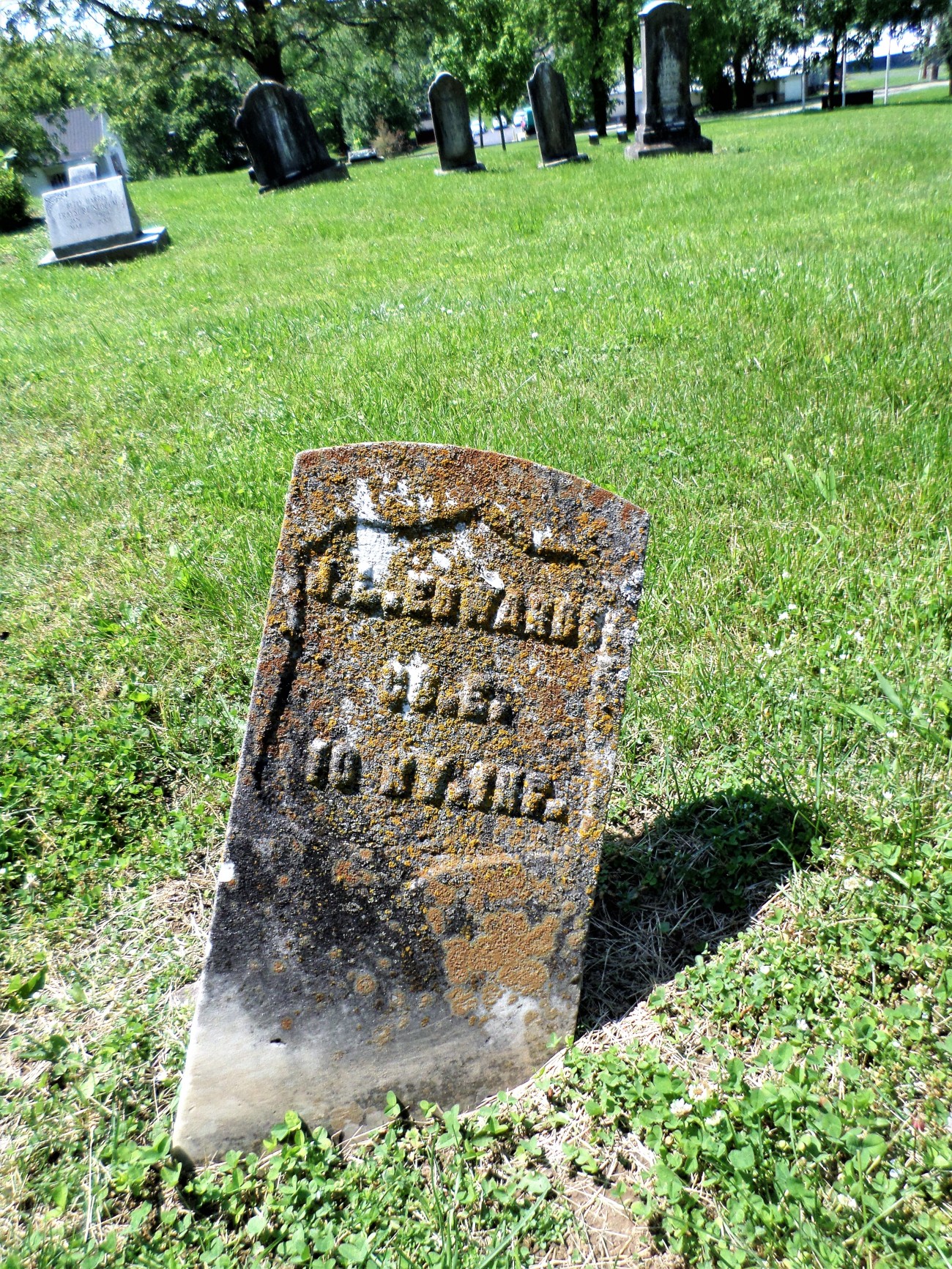 After the war John and William came back to Washington County to live with their parents.  In fact, six of he seven children lived with their parents, and never married.  Youngest children, Benjamin Edwards, married his first cousin, Lucy Edwards, only children of John L. Edwards and Milly Linton.  They had no children.  Alfred, Lucretia and Edward died before 1870.  In the 1880 census for Washington County, John L, Susan and William lived at home.  John L. died between 1880 and 1900, since he does not appear in that census; only William and Susan still lived on the old home place.  William died June 10, 1903. 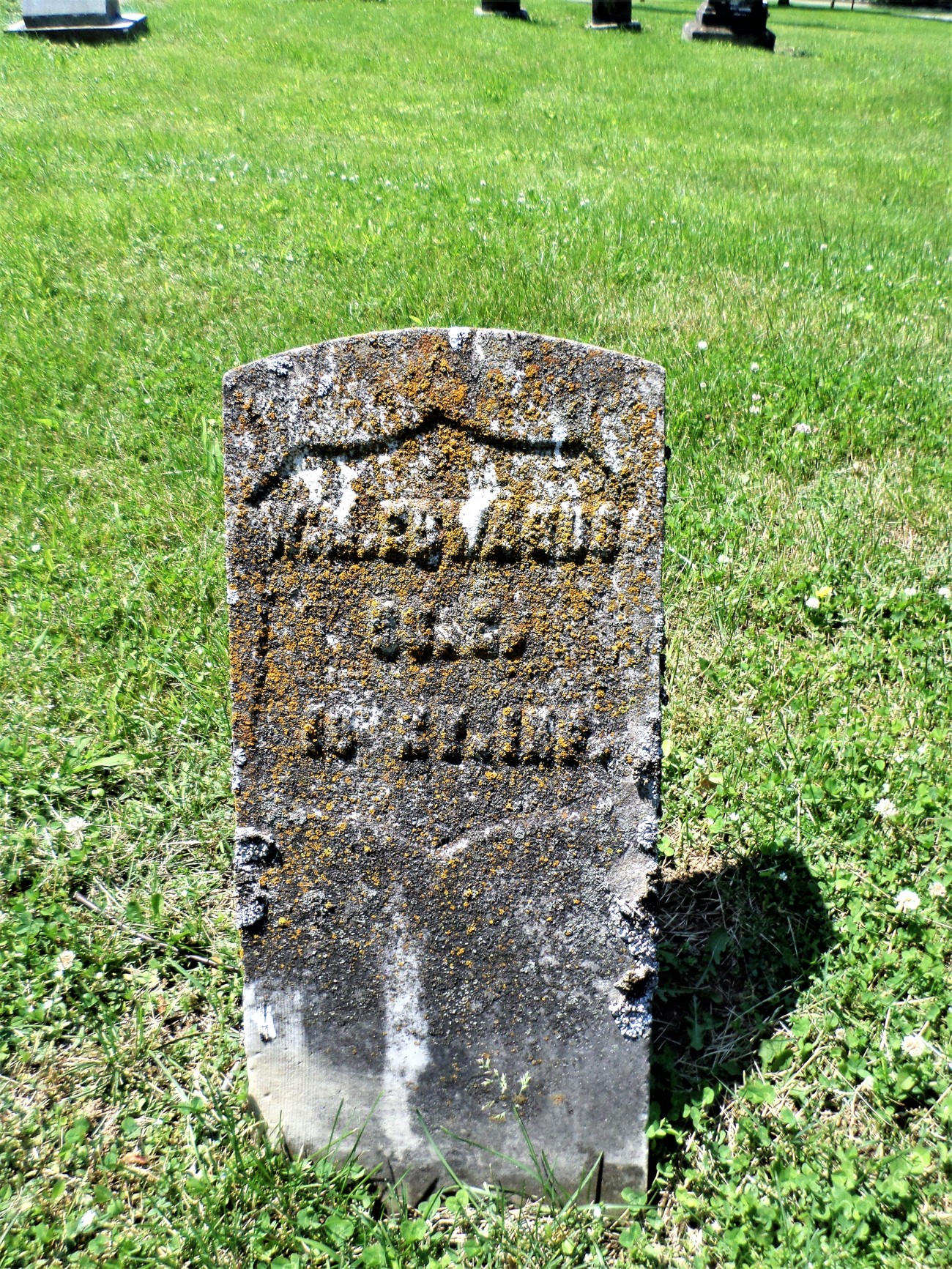 Mr. William M. Edwards, one of the county’s best citizens, died at his home two miles from Springfield on last Wednesday night after a long illness of a complication of diseases.  The deceased was about 63 years of age and was born and reared in Washington County.  He was never married and lived with a sister on a small farm near town.  He was an upright and honorable man, and none stood higher in the estimation of his neighbors than he.

Shortly after the war broke out Mr. Edwards enlisted in the cause of the Union, and was mustered in Company E, Tenth Kentucky Infantry at Lebanon, November 21, 1861.  He followed the fortunes of that regiment of which Col. John M. Harlan was first commander, and who was afterwards succeeded by Col. W. H. Hays, through three years of hard campaigning.  He was in the battles of Chickamauga, Mission Ridge, Jonesboro, and other famous engagements.  On December 6, 1864, Mr. Edwards was mustered out of the army at Louisville, and returned to Springfield and soon engaged in farming.  He was a member of the Bevil Palmer Post G. A. R., and always took an interest in the affairs of that organization.  He was a good Christian man and joined the Presbyterian church during the war.

The funeral took place at the Springfield Presbyterian Church on Friday morning last and was conducted by Rev. G. A. Strickland.

On the premises of the old Edwards place, the former home of the late W. M. Edwards beginning at 1 o’clock on Wednesday, July 15th, there will be sold three horses, two first class Jersey milk cows and calves, two heifers, a Jersey bull, sow and seven shoats, a crop of oats, farming implements and household and kitchen furniture.

Also, at the same time and place the Edwards farm containing about 75 acres will be offered for sale to the highest bidder on easy terms.

The sale of the personal property of the late Wm. Edwards took place on last Wednesday and was well attended, everything bringing good prices.  The Edwards farm containing about 75 acres of land was sold to Mr. Benedict Janes for $1692.

Many of the other siblings of these two brothers lie buried close by in Cemetery Hill.