Bartholomew Wood, the first settler at Hopkinsville in Christian County, was a traveling man.  He was originally from North Carolina, fought in the Revolutionary War with Col. Robertson’s Regiment from South Carolina.  He and his wife, Martha, were married in what became the state of Tennessee, and towards the end of his life moved to Kentucky – then back to Tennessee and back to Kentucky.  He was buried in what became Pioneer Cemetery in the city of Hopkinsville.  His will, written and proved in Warren County, Tennessee, will be posted at a later date.

The first settler upon the site of Hopkinsville was Bartholomew Wood, more familiarly known among his friends and acquaintances as ‘Bat Wood’.  Just when he came to Christian County no one knows; why he came, perhaps he did not know himself, with no definite point in view, he was so favorably impressed with the abundance of game in this locality, that he stopped and built himself a cabin.  He figured conspicuously in the early history of Hopkinsville and of Christian County, and at one time owned a vast amount of land around the embryo city.  He was a man of strong, practical common sense, but rather deficient in book learning; a rough diamond and marvelously adapted to the period in which he lived.  In his buckskin hunting shirt and leather breeches, he hunted and trapped a great deal, and enjoyed himself as only a hunter could.  He belonged to that sturdy class of pioneers whose iron frames had been hardened by exposure, whose muscles were toughened by exercise and toil, and whose bodies seemed invulnerable to disease and pain.  The wilderness, with its wild beasts and savages, was their element.  They sported with danger, and if need be met death with fortitude and composure.   To such men, Kentucky in a measure owes her present glory and greatness.  Bartholomew Wood was originally from North Carolina and emigrated to Tennessee soon after the Revolutionary War.  Some years later and prior to the close of the last century he came to Kentucky, but in what year is not known.  He was here when the county was organized and donated five acres of land for public buildings.  He entered a great deal of land in his own name and in the names of his children.  The following is told of his land speculations:  He had entered a body of land in the name of one of his daughters, who afterward married Levi Cornelius.  After he marriage Mr. Wood went to her to transfer the land back to him, but her husband would not allow her to do it.  In spite of all arguments and importunities, Cornelius held to the land, and finally sold it to Young Ewing. 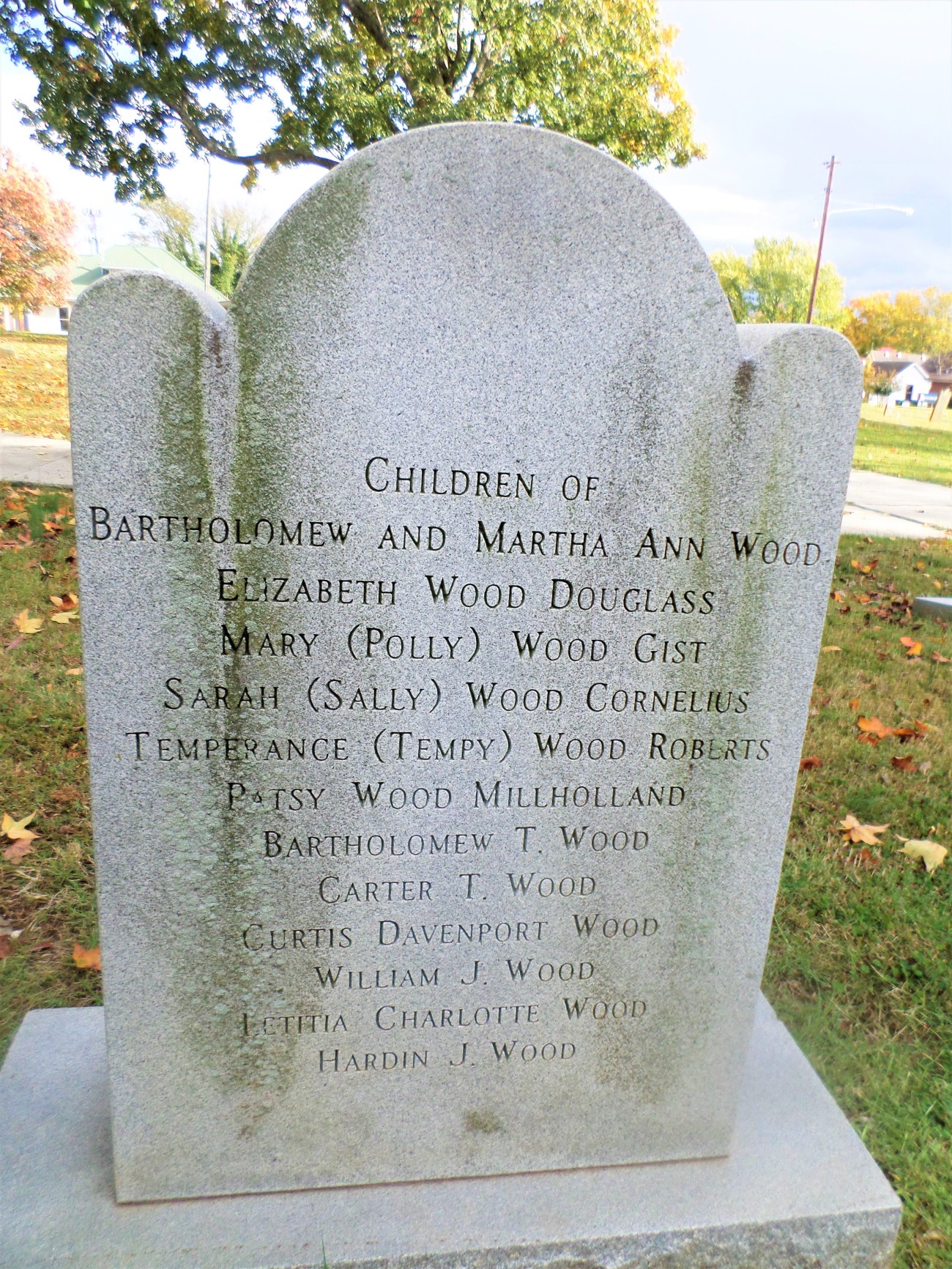 Mr. Wood had a family of several sons and daughters.  The names of his sons were Bartholomew, Hardin, Carter, William and Curtis, the latter the only one now living.  He is a man over eighty years of age and is a resident of the county.  One of his daughters married Levi Cornelius, as already stated; another married William Roberts, and one or two were still single when the old man moved back to Tennessee, which he did some years before his death.  Most of his children went with him, except Bartholomew, but after the death of their father they came back here, and many descendants are living in the county today, among whom is the son already mentioned (Curtis), and Dr. Wood of Hopkinsville, a son of Bartholomew, Jr., and a grandson of the old pioneer.

The original cabin of Mr. Wood stood near the corner of the present Nashville and Virginia Streets.  Where the latter street now is was then a marsh or lagoon for quite a distance back from the river.  This lagoon was covered with innumerable ducks and wild geese and is said to have been one of the strong arguments which induced Bartholomew Wood to settle here, that he might enjoy the shooting of them, as well as other game to be seen everywhere in the most plentiful profusion.