By Kentucky Kindred Genealogical Research on July 9, 2019 • ( Leave a comment )

In memory of John Lewis who departed this life on the 2nd day of August 1813, in the 50th year of his age.  Lewis Cemetery, Hancock County, Kentucky (Breckinridge County in 1813 when he died).

John Lewis, 1763-1813, was born in Loudoun County, Virginia, the son of John Lewis and Elizabeth Brown.  He married Hannah E. Lewis, 1769-1823, his first cousin, daughter of William Joseph Lewis and Catherine Jennings Linton, September 30, 1790, in Loudoun County.  John’s father and Hannah’s father were brothers, the sons of Vincent Lewis and Ann Longworth.  My connection to this Lewis family is through Catherine Linton, mother of Hannah.   She was a sister to my John Hancock Linton.

Will of John Lewis 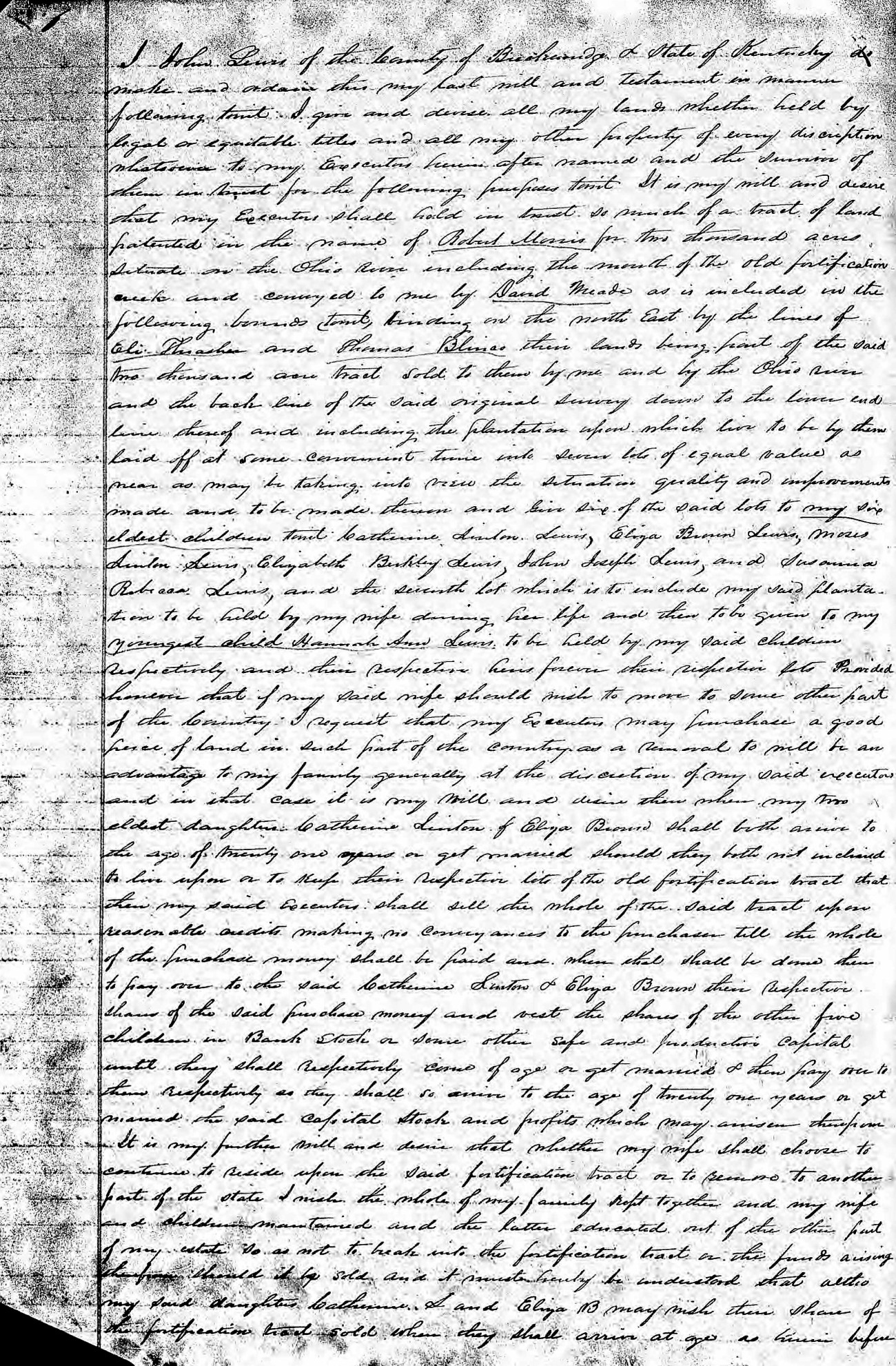 I, John Lewis, of the County of Breckinridge and state of Kentucky do make and ordain this my last will and testament in manner following to wit:  I give and devise all my lands whether held by legal or equitable titles and all my other property of every description whatsoever to my executors herein after named and the survivor of them in trust for the following purposes.  It is my will and desire that my executors shall hold in trust so much of a tract of land patented in the name of Robert Morris for two thousand acres situated on the Ohio River, including the mouth of the Old Fortification Creek and conveyed to me by David Meade as is included in the following bounds, binding on the northeast by the lines of Eli Thrasher and Thomas Blincoe their lands being part of the said two thousand acre tract sold to them by me and by the Ohio River and the back line of the said original subway down to the town and line thereof and including the plantation upon which I live, to be by them laid off at some convenient time into seven lots of equal value as near as may be taking into view the situation, quality and improvements made and to be made therein and vie six of the said lots to my six eldest children:  Catherine Linton Lewis, Eliza Brown Lewis, Moses Linton Lewis, Elizabeth Berkeley Lewis, John Joseph Lewis and Susanna Rebecca Lewis, and the seventh lot, which is to include my said plantation to be held by my wife during her life and then to be given to my youngest child, Hannah Ann Lewis, to be held by my deed of said children respectively and heir respective heirs forever, their respective lots provided however that if my said wife should wish to move to some other part of the country, I request that my executor may purchase a good piece of land in such parts for the country as a removal to will be an advantage to my family generally at the discretion of my said executor and in that case it is my will and desire that when my two eldest daughters, Catherine Linton and Eliza Brown, shall both arrive at the age of twenty-one years or get married should they both not incline to live upon or to keep their respective lots of the old fortification tract upon reasonable credits making no conveyances to the purchases till the whole of the purchase money shall be paid and when that shall be done then to pay over to the said Catherine Linton and Eliza Brown their respective shares of the sale purchase money and vest the shares of the other five children in bank stock or some other safe and productive capital until they shall respectively come of age or get married and then pay over to them respectively as they shall so arrive to the age of twenty-one years or get married, the said capital stock and profits which may arise thereupon.

It is my further will and desire that whether my wife should choose to continue to reside upon the said fortification tract or to remove to another part of the state I wish the whole of my family be kept together and my wife and children maintained and the latter educated out of other parts of my estate so as not to break into the fortification tract or the funds arising therefrom should it be sold and it must hereby be understood that although my said daughters Catherine L. and Eliza B. may wish their share of the fortification tract sold when they shall arrive at age as herein before

mentioned whether to sell the other of the five children’s shares or to hold the same for their several uses must depend altogether upon the discretion of my said executors.  My desire upon that point being that they shall do what in their opinion may be most likely to produce the greatest advantage to my said children.

It is my further will and desire that my two sons, Moses L. and John Joseph, may have given to them the whole of my surveying instruments together with Gibson treaties upon surveying, to be by them kept for the use of my estates until all the lands thereof shall be divided and I further will and desire all the rest and residue of my estate, real personal and mixed, to my said executors in trust for the purpose of selling, the same or any part of parts there in at such time and times and upon such credit or credits as they in their opinion may think best so as to make the most of it or to keep such part or parts thereof for the use of my family as they may think proper or to barter or exchange the whole as any part thereof for other property for the use of my said family as they in their discretion may think proper, hereby improving, my said executors to do and act in all cases respecting the said lands and other property touching disputes about titles, making divisions and conveyances, entering into compromise for the adjustment of disputes and making sales and exchanges and in all other cases to do and act in the same manner as if the property was their own and they were acting for themselves and out of my property they managed in the first place to pay first all my just debts, secondly to purchase a piece of land or plantation for the use of my wife, and finally as herein before mentioned should she choose to remove from my present plantation to be held by her during her lifetime and then to return into the general stock, thirdly to maintain my said wife and family and to educate such of my children as have not completed the same and fourthly, after the death of my said wife, to divide the balance equally between my said children, but as my children shall respectively come of age or many of there should appear more of this last fund of property that will be sufficient for the maintenance of my said family there my said executor, at their discretion, may give my said children as they may respectively come of age or marry so much of my said property only as they may deem proper, which property so given shall upon a final division be accounted for by such children, but without interest there on or the increases therefor whilst it shall have been in their possession, provided however that in case of any accident happening to or misfortune befalling any one or more of my said children by sickness of other dispense of providence then and in that case my will and desire is that my said executor shall give to such child or children such part of portion of this last mentioned fund so my said executors in their discretion as may seem right and proper without paying any attention to an equal final division as is herein directed and provided also that any said executors in the giving any of my children any part of or my said property upon their coming of age or marrying shall in no case give such child or children a greater portion than may reasonably be supposed will fall to his or her share upon an equal final division.

I hereby constitute and appoint my beloved wife, Hannah, and my brother Thomas Lewis, executor and executrix of this my last will and testament, giving to each of them the same power and authority

to all intents and purposes to set singly in case one of them only shall lawfully qualify to act as is herein given to them for jointly in case they should both qualify and then to the survivor such power and authority singly to all intent and purposes as is herein given to them jointly and hereby revoking all former wills by me at any time made and request the court before which this will may be taken for the probate that no security may be required of my said executor, but their own bond alone to be taken for the faithful discharge of the duties herein enjoined them.  In testimony whereof I have hereunto set my seal and subscribed my name with my own hand this 16th day of July 1813.

Acknowledged in the presence of Benjamin Blincoe, Thomas Blincoe

At a county court began and held for Breckinridge County at the courthouse in Hardinsburg, on Monday the twenty-first day of February, one thousand eight hundred and fourteen, the within instrument of writing purporting to be the last will and testament of John Lewis, deceased, was duly proven to be the act and deed of the within named John Lewis for the purpose therein mentioned by the oaths of Benjamin Blincoe and Thomas Blincoe, subscribing witnesses and ordered to be recorded.