By Kentucky Kindred Genealogical Research on November 30, 2019 • ( Leave a comment )

Jubal Wray and Catharine Mosby fell in love and wanted to marry.  Catherine was an orphan, Edward Worthington was her guardian, and he readily gave his consent.  The consent was signed May 25, 1819, and the marriage bond was dated June 23, 1819.

Sir, this is to certify to you that I have no objection to Mr. Jubal Ray’s marrying my ward, Miss Catharine Mosby.  You will therefore please to grant him a license for that purpose, given under my hand the 25th of May 1819. 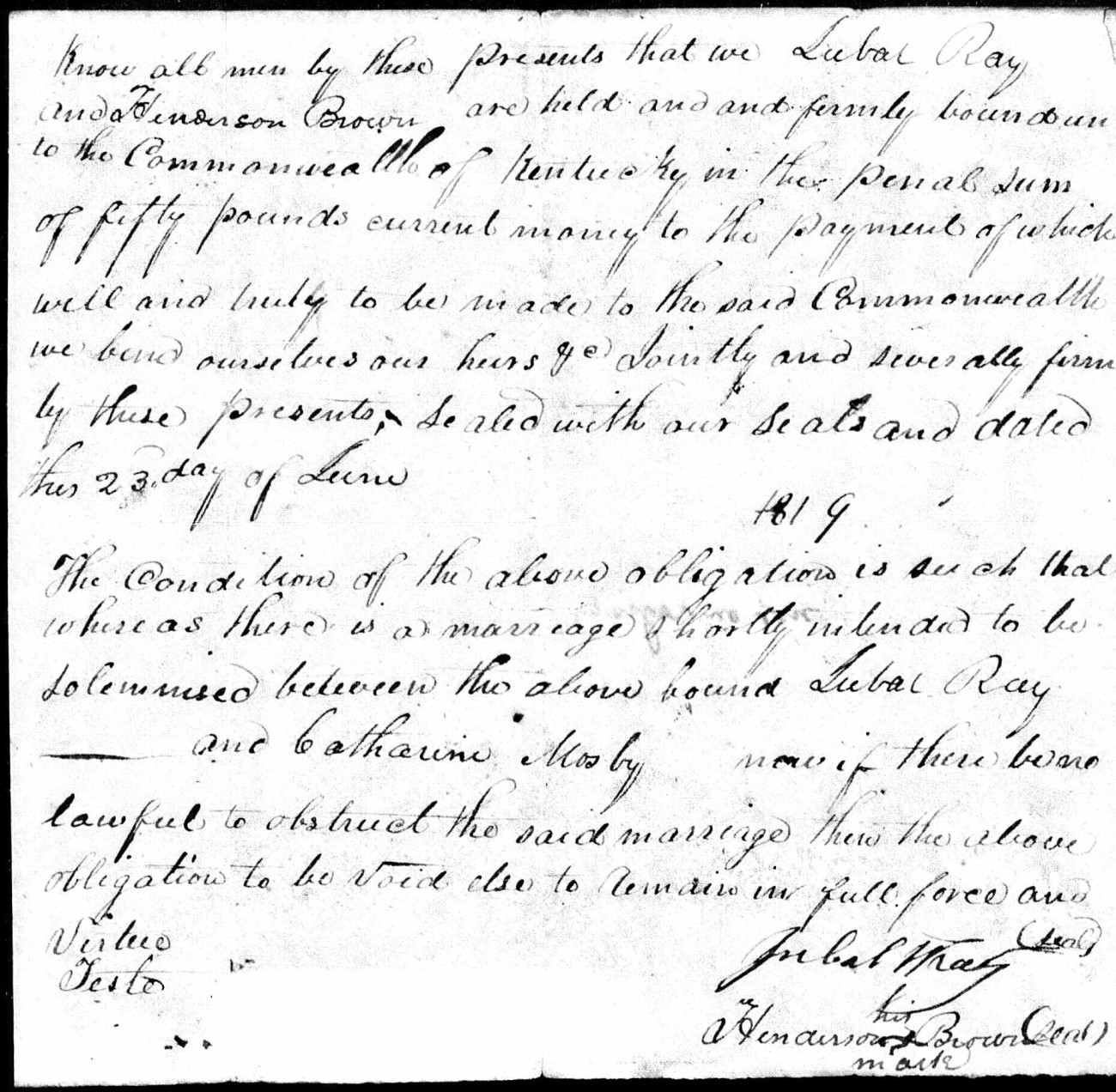 Know all men by these presents that we, Jubal Ray and Henderson Brown, are held and firmly bound unto the Commonwealth of Kentucky in the penal sum of fifty pounds current money, to the payment of which well and truly to be made to the said Commonwealth.  We bind ourselves, our heirs, jointly and severally, firmly by these presents, sealed with our seals and dated this 23 day of June 1819.

Notice that Jubal Wray spelled his name with the “W”.  There was another Ray family in Mercer County that did not have a “W” at the beginning of the last name.

This quest was actually begun with photographs of the gravestones for Jubal and Catharine in Buffalo Springs Cemetery in Stanford, Lincoln County.  After finding the marriage bond and consent my search began.  The family appeared in the Mercer County census records through 1830, but in 1840 they were living in Lincoln County.  Above is my chart of the census years, 1820-1850, the first two years in Mercer, the last two in Lincoln.  The 3 old daughters, listed as 15-20 and 20-30 in the 1840 census, must have married or died between late 1840 and 1850.  I have a book of Lincoln marriages (could find nothing online), but it is not indexed for brides.  Not a problem.  I looked through each and every entry and found two possibilities.  Isabella Wray married John M Hughes March 4, 1844.  Mary Ann Wray married Samuel Huston July 12, 1849.  Perhaps the third daughter died of an illness during those years.  These are just conjectures – I cannot prove anything at this point.

Catharine Mosby Wray died in 1859 after a marriage of forty years.  Beside Catharine is buried Sarah Hughes, who died the next year at the age of 83 years – could this be the mother of John M. Hughes who married Isabella Wray?  Hm, a possibility.

In the 1860 census Jubal was living in the household of son James, 36, who married Mary, she being just 20 years of age.  Jubal was 76, a millwright, born in Virginia.  Three of his children (and James’ brothers and sister) also lived there – Moses, 25; Sarah, 22; and David, 20.  In 1870 Jubal remained with son James, at 83 years of age.  The three younger children must have married and made households of their own.  James and Mary had three young daughters – Mitty, Anna and Mary.

We are called upon to announce the death of another very old citizen of our county.  Mr. Jubal Wray, aged 89 years, died at the residence of his son, James, on Wednesday morning, the 18th inst., after an illness of a few weeks.  Up to the time of his illness, he enjoyed the most wonderful health, possessing from his childhood an iron constitution.  He lived a life of honest industry, reared a large family, all of whom are respected and useful citizens.  Peaceful be his sleep, and glorious his awakening.

Beside Jubal’s grave is a stone for Samuel Huston, who died in 1886.  Daughter Mary Ann was his second wife as he married Elizabeth Lee June 7, 1828.  I believe this, and the grave of Sarah Hughes, beside Catharine Wray, proves the two marriages mentioned above.

Mr. James W. Wray is dead and a happy household is broken and distressed.  It was the first death to occur in it and the blow is therefore more keenly felt by his loved ones.  He had suffered a long time of a bronchial affection and when death came at 12:20 Friday morning, it was a happy relief to the tired spirit, which longed to be with its God at rest.  Conscious up to the very last, and fully aware of his condition, he gave the most gratifying assurances of his hope for a better life and with almost his last breath he said he was ready and waiting for the transition.  All of his family were present at the death scene and while the parting was like snapping their heart strings, they had the blessed consolation of seeing how calmly and how trustingly a christian can die.  Mr. Wray had been a member of the Presbyterian Church for many long years and his faithful service in the Master’s cause has won for him the plaudit, “Well done, thou good and faithful servant, enter the rest prepared for thee.”

Mr. Wray was born and raised in Kentucky, but found his wife in Bloomington, Illinois.  She was Miss Mollie Dooley and their union proved a most happy one.  Five children were born to them – Misses Kittie (now Mrs. J. T. Lynn), Annie, Nettie, Georgie and Master Homer – as loved and as lovable a family as ever lived.  In early life Mr. Wray followed the business of stock trading.  Then animals for the South had to be driven and many an interesting and some perilous incidents of those trips he was wont to relate.  Though he lived to be 68 years old, the hardships of early told on his constitution and made him pay the penalty with rheumatic and other afflictions.  Several years ago his vehicle was overturned down an embankment on a narrow point on the Hustonville turnpike and he was hurt so severely he never fully recovered.

A few years since Mr. Wray bought Pink Cottage and at this delightful retreat he spent his declining years in peace and contentment.  A large crowd gathered there at 10 o’clock Saturday and after listening to a touching discourse by Rev. Ben Helm, followed the remains to their last resting place in Buffalo Cemetery.  the tenderest sympathy is felt for the bereaved family.  May they rely on the promises of the God they love and serve and find consolation in the assurance that He doeth all things well.

It is interesting that James Wray met his wife in Bloomington, Illinois, for his two sisters lived there in their later lives.  Isabella, who married John Milton Hughes, died there March 24, 1896.

A dispatch was received by friends here Tuesday telling them of the death that morning at her home in Bloomington, Illinois, of Mrs. Isabella Hughes, relict of Milton Hughes, formerly of this place.  Mrs. Hughes was a sister of the late Mr. James M. Wray and was born in Boyle County 72 years ago.  She had been sick for two years, her illness finally running into consumption.  During all the time her faithful daughters, Misses Mary and Jennie, ministered to her in every loving way.  The latter especially has had a hard time and is worthy of all praise.  In order to hold her position in a store she had to fill it regularly and for a long time has divided the night with her sister in sitting up with “mother”.  Mrs. Hughes leaves two other children, Mrs. Lizzie Hibler and William H. Hughes, to suffer a mother’s loss.  A member of the Methodist church for many years and a Christian, tried and true, Mrs. Hughes has gone to the reward that awaits the faithful and is safe with the redeemed in Heaven.

A note in the Interior Journal of September 25, 1896, tells us that sister Mary, a widow of Samuel Huston, lived in Bloomington also.  “Mrs. Mary Ann Huston, of Bloomington, Illinois, is here on a visit o old friends, having spent many years of her life here before the war.”

On Wednesday at Erlanger, Mr. Moses Wray, aged 72 years, died of a complication of troubles.  He was a brother of the late James Wray, of this place.  Mr. Wray had been an invalid for several years, having suffered several paralytic strokes.  Mr. Wray was a splendid man and his death is to be regretted by all who knew him.  He was unmarried.  His remains were brought here yesterday afternoon and interred in Buffalo Cemetery after short services at the grave by Dr. W. F. Vaughan.

David Wray died in August of 1909, from the Interior Journal of August 30th:

Mr. David W. Wray, who formerly lived in this state and was a brother of the late James M. Wray, of this place, died at Benton Harbor, Michigan, last week.  He is survived by his widow and four grown children.