By Kentucky Kindred Genealogical Research on January 22, 2020 • ( Leave a comment )

At first I intended to show just the gravestone photos – since the attached photos of the couple make this stone very special – but you know I usually can’t stop there.  And I didn’t, and found so much information on Clarence Maxwell and Jennie LaMond Taschner.

Clarence was the son of Andrew Maximilian Taschner and Clara Grace Wescott and was born in Michigan in 1897.  In the 1900 census of Chicago, Illinois, we find Andrew, 24, and Clara, 23.  Andrew is a machinist.  The couple have one son, Clarence, 2.  By 1910 the Taschner family has moved from Chicago to Paducah in McCracken County, Kentucky.  One new addition is son Roy, 9, who was born in Illinois.

Jennie was the daughter of Charles Knox LaMond and Bettie Rives Givens.  Jennie was born in Kentucky, as were her parents.  In the 1900 census of McCracken County Charles is 45, he and wife Bettie, 41, have been married 18 years.  Bettie has given birth to five children, four of whom have survived – Delia, 14; Beulah, 11; son Givens, 5; and Jennie, 2.  Charles was a farmer.

Clarence and Jennie married September 20, 1921.  The following wedding announcement appeared in The Paducah Sun Democrat, on the same afternoon as the wedding:

This afternoon at 1 o’clock, the marriage of Miss Jennie Duncan LaMond and Mr. Clarence Maxwell Taschner was solemnized at the parsonage of St. Francis de Sales church, the Rev. Father Connolly officiating.  The families of the two young people and a few of their most intimate friends were present at the ceremony.

Miss Sue Masserang and Mr. Roy Taschner, brother of the bridegroom, were the attendants.

The brides was attractively gowned in a traveling suit of blue duvetyn with accessories of gray.  Her corsage was or roses and valley lilies.  Miss Masserang wore a tan crepe meteor dress with corsage of pink rosebuds and black hat.

The bride is the daughter of Mr. and Mrs. C. K. LaMond of the Blandville Road.  Mr. Taschner is the son of Mr. and Mrs. M. A. Taschner of Broad Street.  Both young people were students at St. Mary’s Academy and have a host of friends.  Mr. Taschner is the manager of the Taschner Motor and Supply Company.  They left at 2:10 o’clock for a southern bridal trip that includes Nashville and Chattanooga.  After October first they will be at home at 1910 Broad Street.

The 1930 census for McCracken County finds the young couple with one child, Howard, who is 7.  Clarence is a plumber.  And by 1940, the three are still living together, Howard is 17 at this point, and Clarence is a chef on a boat!

The threat of war in 1942 caused both father and son to fill out registration cards.

Clarence Maxwell Taschner lived at Route #2, Hinkleville Road, Paducah, McCracken County, Kentucky.  He was 44 years of age, born in Saginaw, Michigan, is a self-employed farmer.  Clarence was 5′ 9″, 240 pounds, with blue eyes, brown hair, a ruddy complexion and a scar on the right side of his face.  The date on the card was February 14, 1942. 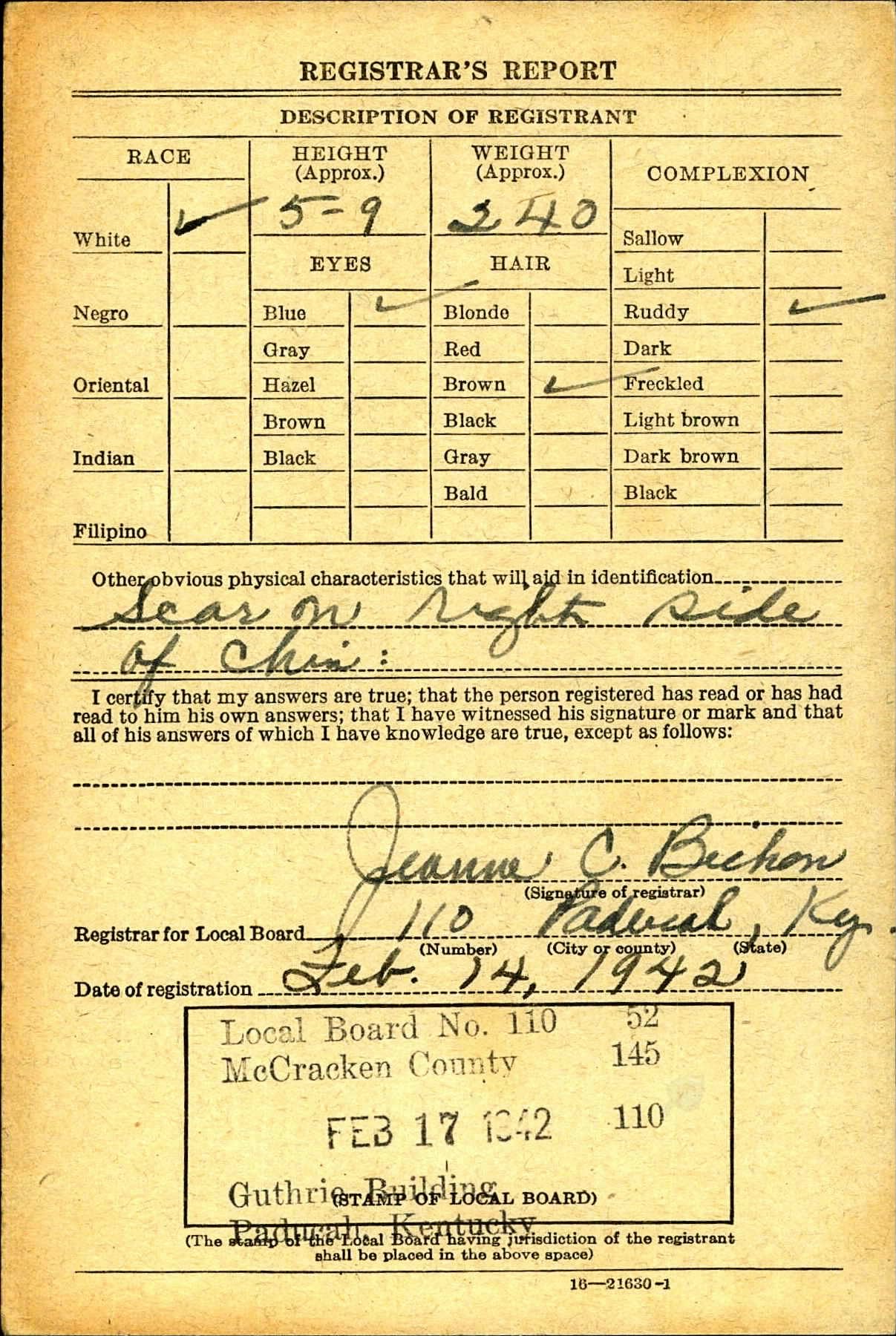 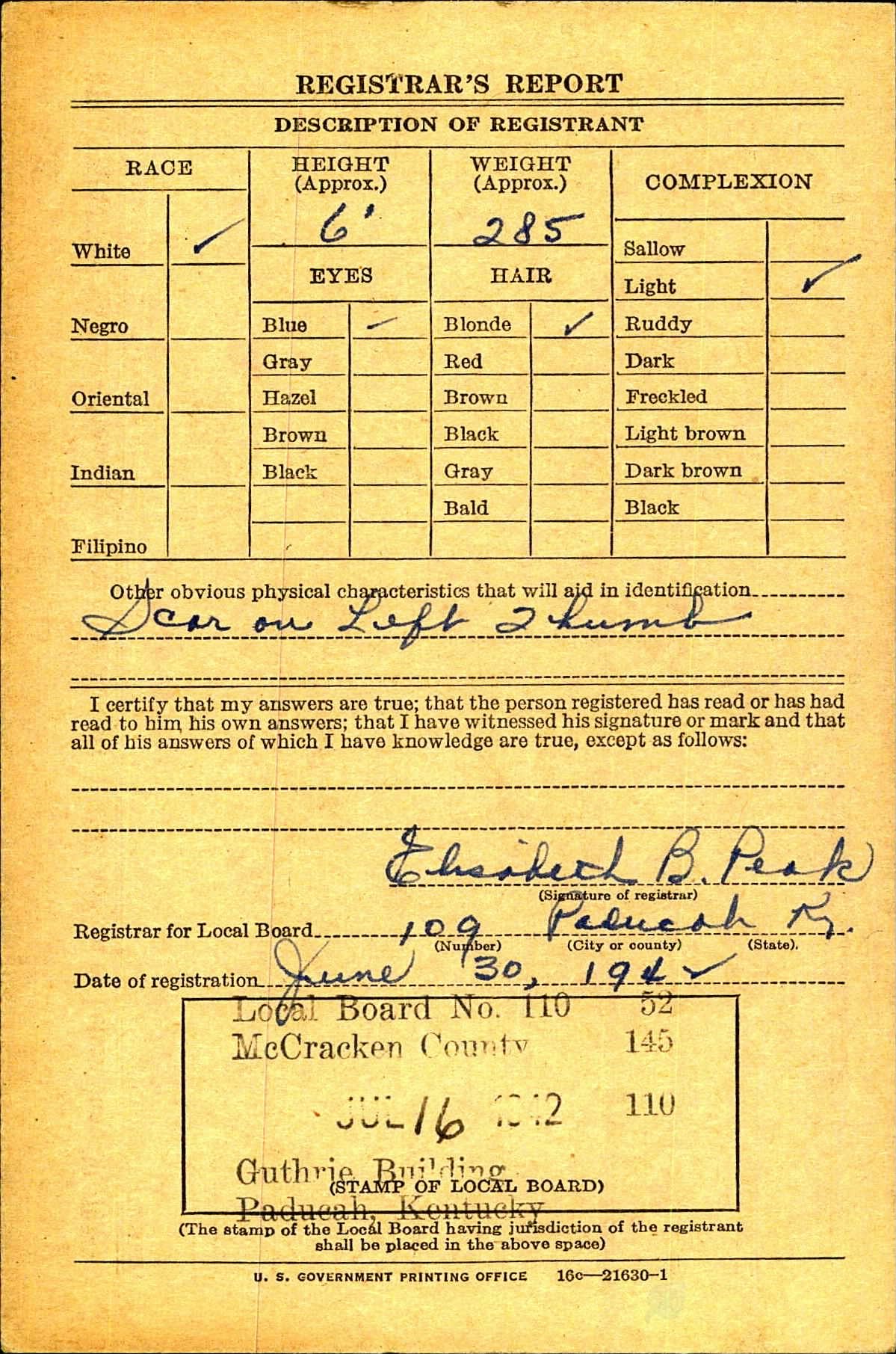 Neither was called for service.

A veteran of World War I, he was formerly a river pilot.  He had been ill about two years.

Mr. Taschner was a member of St. Francis de Sales church.  Funeral services are incomplete.  The body will be at Lindsey funeral home Saturday morning.

A native of McCracken County and the son of the late Clarence Taschner, he was a member of the Catholic church and the Propeller Club.  Mr. Taschner was a riverboat captain for Hines Towing Company and he received his pilots license in 1948.

Services will be conducted Tuesday, at 10 a.m. at Roth Funeral Home.  The Revs. Herman Moman and Harold Diller will officiate with burial in Mt. Kenton Cemetery.

Friends may call at the funeral home.

Jennie D. LaMond Taschner lived another 3 years before passing away at the age of 84.

A native of McCracken County, she was a member of the Elks Auxiliary and St. Thomas More Catholic Church in Paducah.  She was the widow of Clarence Taschner.

Funeral arrangements are incomplete at Roth Funeral Home in Paducah.

And thus ends the story of the Taschner family.  I find it interesting that father and son were both riverboat pilots, and all Jennie’s important events happened on the 20th of the month – her birth, marriage and death.