By Kentucky Kindred Genealogical Research on July 16, 2013 • ( Leave a comment ) 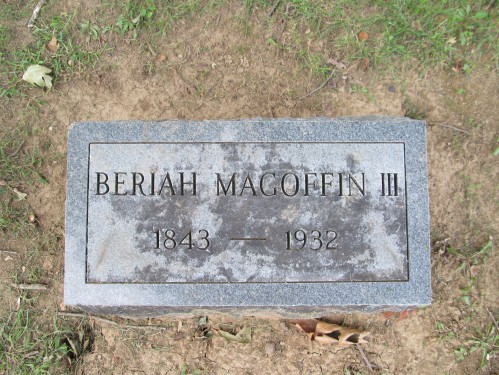 The passing of Colonel Beriah Magoffin, 86, at his home in McAlester, Oklahoma, Monday, August 29, was a sincere grief to many here who knew and reverenced him.  His death was due to infirmities of his advanced years from which he had recently gradually grown weaker.  Colonel Magoffin was a man of unusual intellect and a personality that won every person for his friend.  These gifts combined with a high sense of honor, culture and gracious courtesy made him an outstanding man wherever he was placed.  A devout Christian and a devoted husband and father were unassuming qualities that added to his character.  He had a fine public spirit and in the years past that he and his wife spent in Harrodsburg, his old home, he lent himself with deep interest to the affairs of this community.

Colonel Magoffin was of prominent pioneer families whose members were active in founding and establishing Kentucky as a state.  He was the grandson on his mother’s side of Isaac Shelby, the first governor of Kentucky.  His father was Governor Beriah Magoffin, of Harrodsburg, the Chief Executive of Kentucky during the War Between the States.  Many members of his family were outstanding in state and national activities.  During the War Between the States he enlisted on the  Confederate side as a very young man under General John Hunt Morgan.  For many years he returned to Kentucky to meet at the annual gathering of Morgan’s men.

During the war he was taken a prisoner and placed in the noted federal Rock Island prison.  He escaped, but was captured and though little more than a boy, he steadfastly refused to tell who aided him, though subjected to many indignities by the officials.

After the war he was married to Miss Lucy E. Thompson, of Harrodsburg, and later they moved to Minnesota.  After many years of success in business there, they sometime ago went to McAlester, Oklahoma, to live where a son had located.  Both Mr. and Mrs. Magoffin retained to a deep degree the love for Harrodsburg, and for a long time have spent most of their summers here where both were loved and revered.  It has been their custom to celebrate the anniversaries of their honeymoon which they spent in Louisville at the Old Inn Hotel, and to return there and occupy the same room.

In accordance with his wish Colonel Magoffin was brought here to the home of his youth to rest with his parents in Spring Hill Cemetery, arriving here Wednesday night, when many friends waited at the railroad station and a number threw open their homes to the family.  He was accompanied by his devoted wife and son, Eben Magoffin, and was met here by his niece, Mrs. William Austin, of Knoxville, Tennessee.

The funeral was at eleven o’clock Thursday morning with simple rites at the grave in Spring Hill Cemetery and in the presence of many relatives and friends from this and other places.  In the absence from town of the Presbyterian minister, to which faith he belonged, the services was conducted by his friend, the Rev. T. Hassell Bowen, pastor of the Christian Church.  Resting on the casket were three Confederate flags sent for that purpose by Mrs. R. H. Sampson, of Knoxville, Tennessee, a daughter of the noted Confederate, General Felix Zollicoffer.