By Kentucky Kindred Genealogical Research on February 27, 2016 • ( Leave a comment )

John L. White, son of Samuel Riley White and Martha Lewis, married Margaret Whitten August 15, 1853, in Washington County, Kentucky.  The couple had six children by 1860.  John entered the Civil War on the Union side, but was unfortunately taken prisoner and housed at Andersonville Prison, Sumter, Georgia, where he died April 30, 1864, according to Civil War Prison Records.

One other thing to mention is the three documents you see below.  Marriage in early Kentucky was composed of three steps.  First, the groom and another gentleman, usually a relative or friend of the groom or the bride, applied for a marriage bond, agreeing to pay fifty pounds current money IF the marriage was not solemnized.  Then a marriage license was procured; if the bride and/or groom were under age permission was given by a parent or guardian – many of these early permissions are still in the clerk’s office!  And finally, after the marriage was solemnized, the officiating official filled out a marriage certificate.  Today the marriage bond is no longer required. 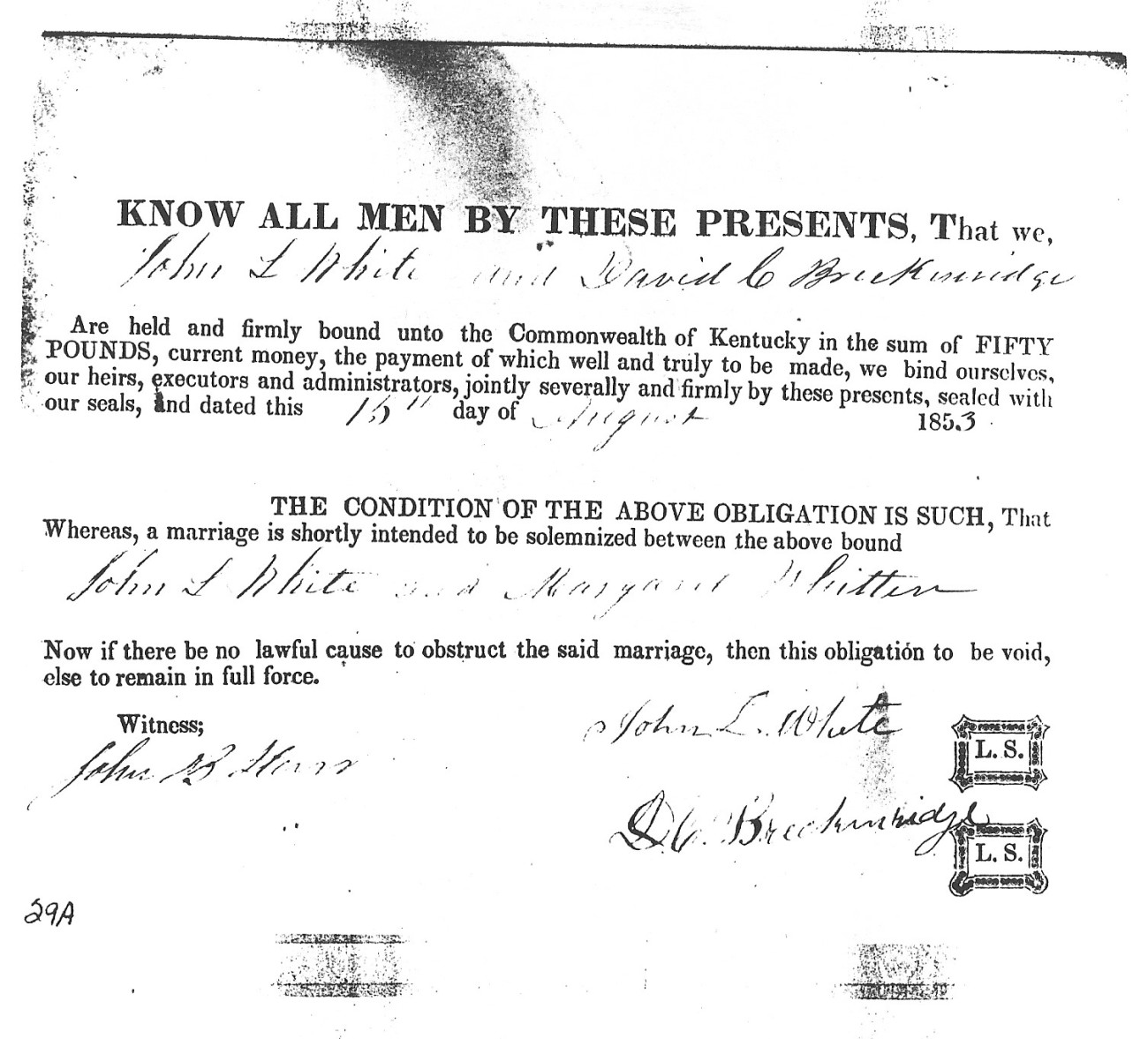 KNOW ALL MEN BY THESE PRESENTS

That we, John L. White and David C. Breckinridge, are held and firmly bound unto the Commonwealth of Kentucky in the sum of fifty pounds current money, the payment of which well and truly to be made, we bind ourselves, our heirs, executors and administrators, jointly severally and firmly by these presents, sealed with our seals and dated this 15th day of August, 1853.

The condition of the above obligation is such that whereas a marriage is shortly intended to be solemnized between the above bound John L. White and Margaret Whitten.  now, if there be no lawful cause to obstruct the said marriage, then this obligation to be void, else to remain in full force.

The Commonwealth of Kentucky

To an Minister of the gospel, or other Person, legally authorized to solemnize Matrimony.

You are permitted to solemnize the Rites of Matrimony between John L. White and Margaret Whitten, the requirements of the law having been complied with.

Witness my signature, as Clerk of the Washington County Court, this 15th day of August, 1853.

This is to certify, that on the 15th day of August 1853, the Rites of Matrimony were legally solemnized by me, between John L. White and Margaret Whitten, at Meredith Lynch’s in the County of Washington, in the presence of Richard Jude and William Lynch, by Benjamin Keeling.