By Kentucky Kindred Genealogical Research on February 23, 2018 • ( Leave a comment )

An indenture is another word for deed – used mainly in colonial days and the early days of our country.  I wanted to share this, first for the wording of indenture, and for the handwriting.  Like today, everything is precisely written, facts mentioned several times, to make sure all the T’s were crossed, and I’s dotted.

The handwriting of this indenture is beautiful, quite different from most I’ve seen.  Each letter and word is so exact, today it could be a font.  Would you have guessed the last name of the seller to be Foster?  The capital ‘F’ is very elaborate, and you must look carefully at the ‘s’, otherwise you may think it a second ‘o’.  The G’s, whether upper or lowercase swoop back in an elaborate half circle.  The uppercase L looks much like an S, there, again, having an elongated tail on the end – and they are all exactly the same.  The uppercase S is quite ordinary in comparison.

Benjamin Mason is my fifth great-grandfather.  His daughter, Ann Mason, married Captain John Linton in this same year, 1770.  Benjamin was a vestryman for Cameron Parish.  He was also a lawyer according to page 400 of the Loudoun County 1784-1785 Deed Book – ‘Know all men by these presents that I, Henry Alexander, of County of King George in the Commonwealth of Virginia, by these presents do nominate, constitute and appoint, my trusty friend, Benjamin Mason of Loudoun County, my true and lawful attorney.’ 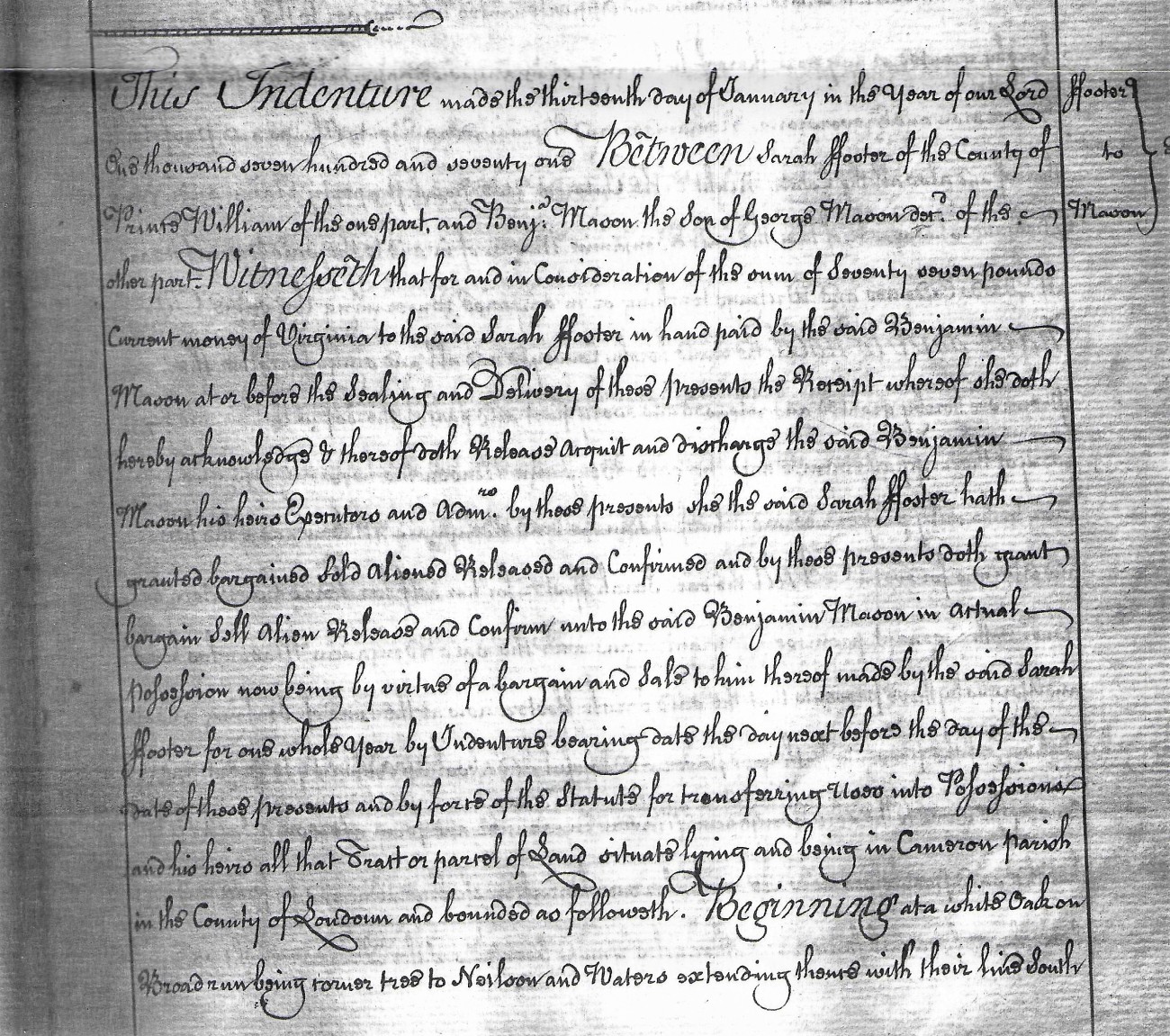 This Indenture made the thirteenth day of January in the year of our Lord, one thousand seven hundred and seventy, and between Sarah Foster, of the County of Prince William of the one part, and Benjamin Mason, the son of George Mason, deceased, of the other part.  Witnesseth that for and in consideration of the sum of seventy-seven pounds current money of Virginia, to the said Sarah Foster in hand paid by the said Benjamin Mason, at or before the sealing and delivery of these presents, the receipt whereof doth hereby acknowledge and thereof doth release, acquit and discharge the said Benjamin Mason, his heirs, executors and administrators by these presents, she, the said Sarah Foster hath granted, bargained, sold, aligned, released and confirmed and by these presents doth grant, bargain, sell, align, release and confirm unto the said Benjamin Mason in actual possession now being by virtue of a bargain and sale to him thereof made by the said Sarah Foster for one whole year by indenture bearing date the day next before the day of the date of these presents and by for of the status for transferring into possessions and his heirs all that tract or parcel of land situated, lying and being in Cameron Parish in the County of Loudoun and bounded as followeth.  Beginning at a white oak on Broad Run being corner tree to Neilson and Waters, extending then with their line south 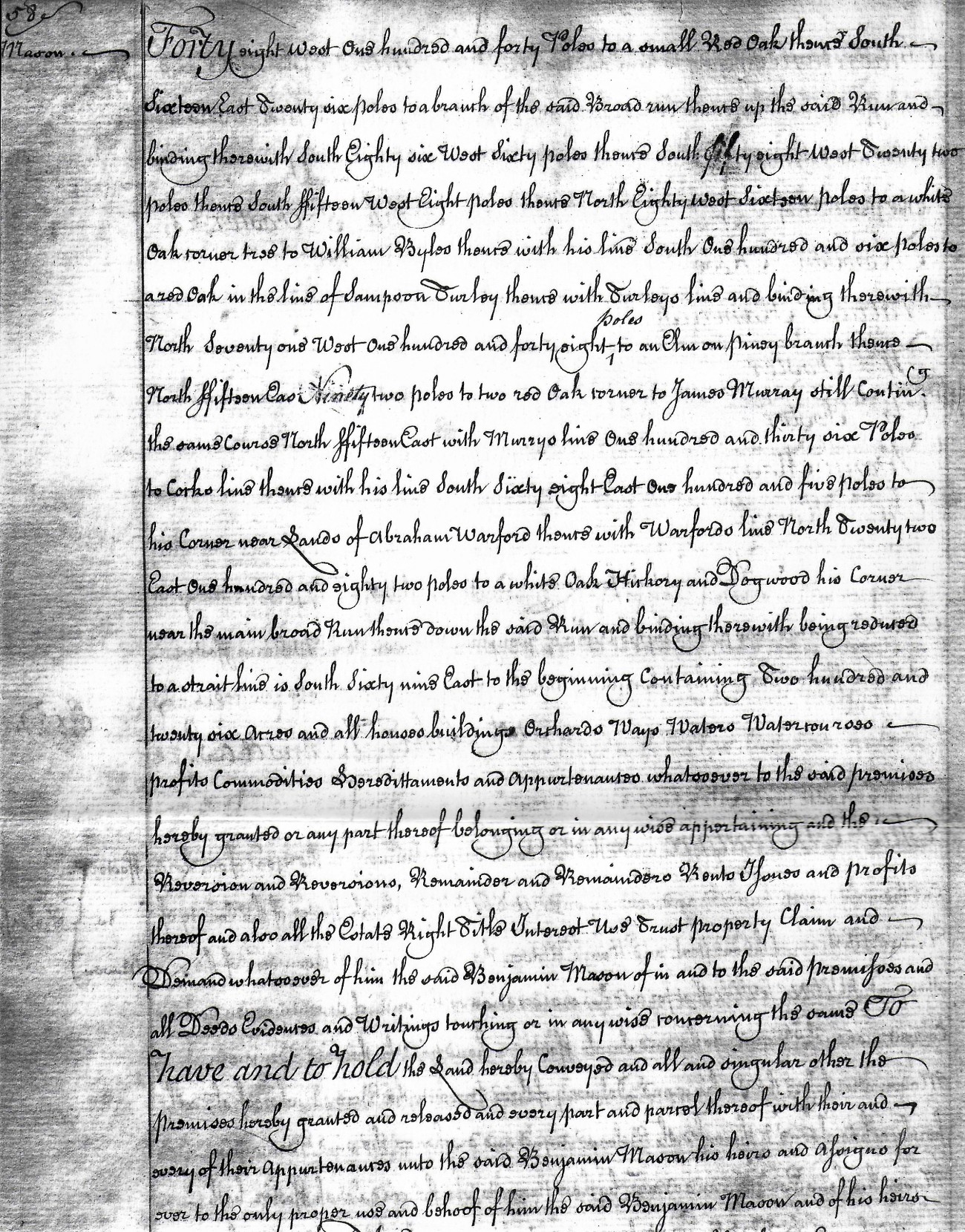 Forty-eight, west one hundred and forty poles to a small red oak, then south sixteen, east twenty-six poles to a branch of the said Broad Run, then up the said river and binding therewith south eighty-six, west sixty poles, then north eighty, west sixteen poles to a white oak, corner tree to William Byles, then with his line south one hundred and six poles to a red oak in the line of Sampson Turley, then with Turley’s line and binding therewith north seventy and west one hundred and forty-eight poles to an elm on Piney Branch, then north fifteen, east ninety-two poles to two red oak, corner to James Murray, still continue the same course north fifteen, east with Murray’s line one hundred and thirty-six poles to Cork’s line, then with his line south sixty eight, east one hundred and five poles to his corner near the lands of Abraham Warford, then with Warford’s line north twenty-two, east one hundred and eighty-two poles to a white oak, hickory and dogwood, his corner near the main Broad Run, then down the said run and binding there with being routed to a straight line in south sixty-nine, east to the beginning, containing two hundred and twenty-six acres, and all houses, buildings, orchards, ways, waters, profits, commodities, appurtenances whatsoever to the said premises hereby granted or any part thereof belonging or in any wise appertaining and the revision and reversions, remainder and remainders, rents and profits thereof and also all the estate right and the interest use, trust property claim and demand whatsoever of him, the said Benjamin Mason, of in and to the said premises and all deeds, evidences and writings touching or in any wise removing the same, to have and to hold the land hereby conveyed and all and singular other the premises hereby granted and released and every part and parcel thereof, with their and ever of their appurtenances unto the said Benjamin Mason, his heirs and assigns for ever to the only proper use and behoof of him, the said Benjamin Mason and of his heirs

And assigns forever.  And the said Sarah Foster, for herself, her heirs, executors and administrators, doth covenant, promise and grant to and with the said Benjamin Mason, his heirs and assigns by these presents that the said Sarah Foster, now at the time of sealing and deliver of the presents hath good power and lawful and absolute authority to grant and convey the same to the said Benjamin Mason in manner and form aforesaid.  And that the same promises now are and so forever after shall remain and be foresaid clear of and from all former and other gifts, grants, bargains, sales, dower rights and

Title of dower, judgements, executions, titles, troubles, charges and ? whatever made and committed or suffered by the said Sarah Foster or any claimant in by or under her, them or any of them the quit rents hereafter to grow and payable to the chief Lord of the ?, his heirs and successors for and in respect of the premises only, excepted and foreprized.  And lastly that the said Sarah Foster, her heirs, all and singular, the premises hereby granted and released with the appurtenances unto the said Benjamin Mason, his heirs and assigns against her, the said Sarah Foster and her heirs or any other person claiming in by her, them or any of them, and will forever warrant and defend the same by these presents.  In witness whereof the said Sarah Foster hath hereunto set her hand and seal the day and year first above written

Received of Benjamin Mason seventy-seven pounds, the full consideration within mentioned this 13th day of January 1771.

At a Court held for Loudoun County April the 8th 1771

Benjamin Mason, Sr., William Foster and James Foster, three of the subscribing witnesses thereto and ordered to be recorded.