1790 Will of Valentine King

By Kentucky Kindred Genealogical Research on February 27, 2018 • ( Leave a comment )

Valentine King, along with his brothers, John, William and Nimrod, fought in the Revolutionary War as members of the Stafford County Militia, 3rd Virginia Regiment.  They were all discharged from the camp at Valley Forge, February 16, 1778, and returned to Stafford County.  They soon moved to Kentucky, receiving land for their military service. 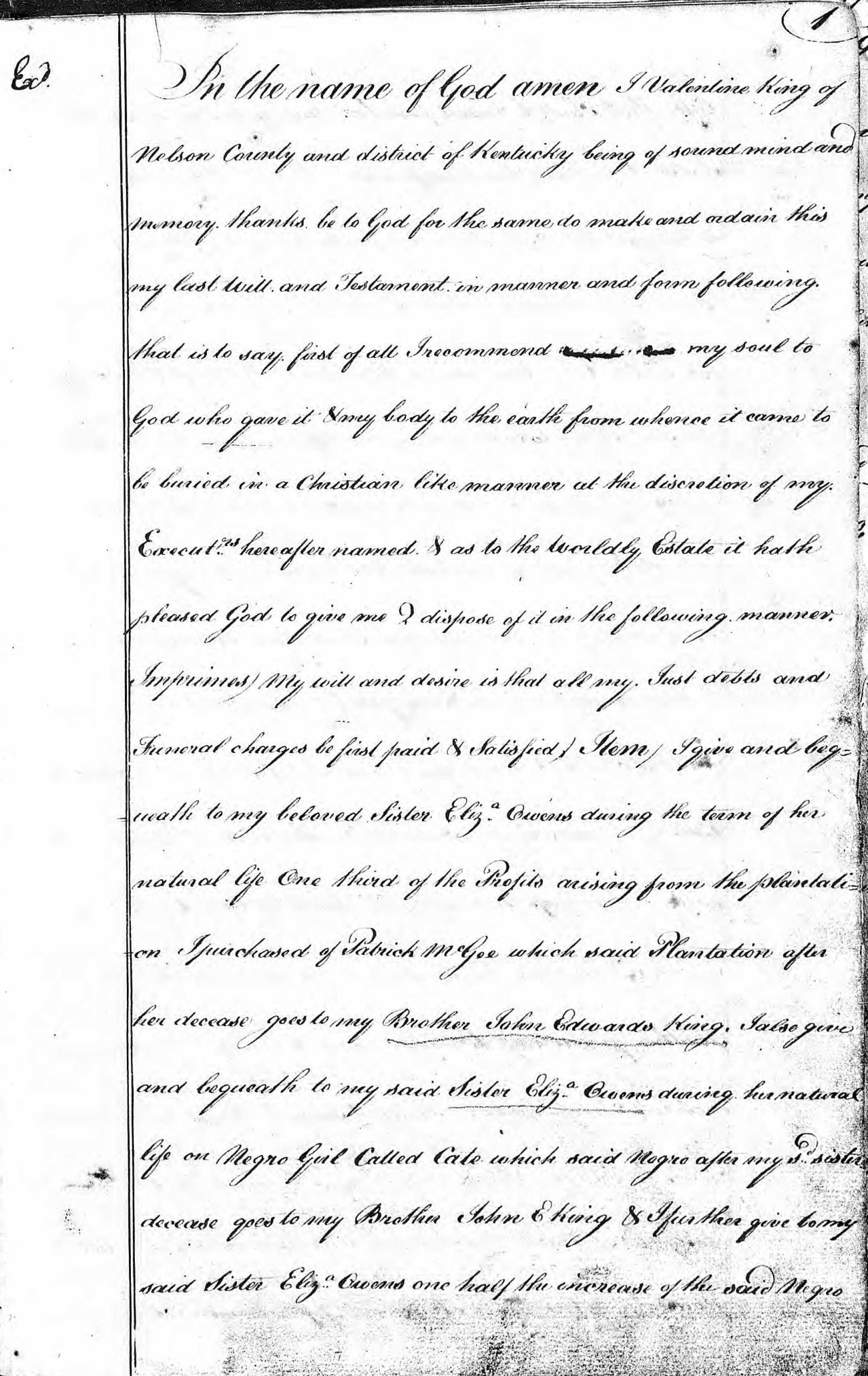 In the name of God amen.  I, Valentine King of Nelson County and district of Kentucky, being of sound mind and memory, thanks be to God for the same, do make and ordain this my last will and testament in manner and form following.  That is to say, first of all, I recommend my soul to God who gave it and my body to the earth from whence it came, to be buried in a Christian-like manner at the discretion of my executors hereafter named, and as to the worldly estate it hath pleased God to give me I dispose of it in the following manner.

Imprimis.  My will and desire is that all my just debts and funeral charges be first paid and satisfied. 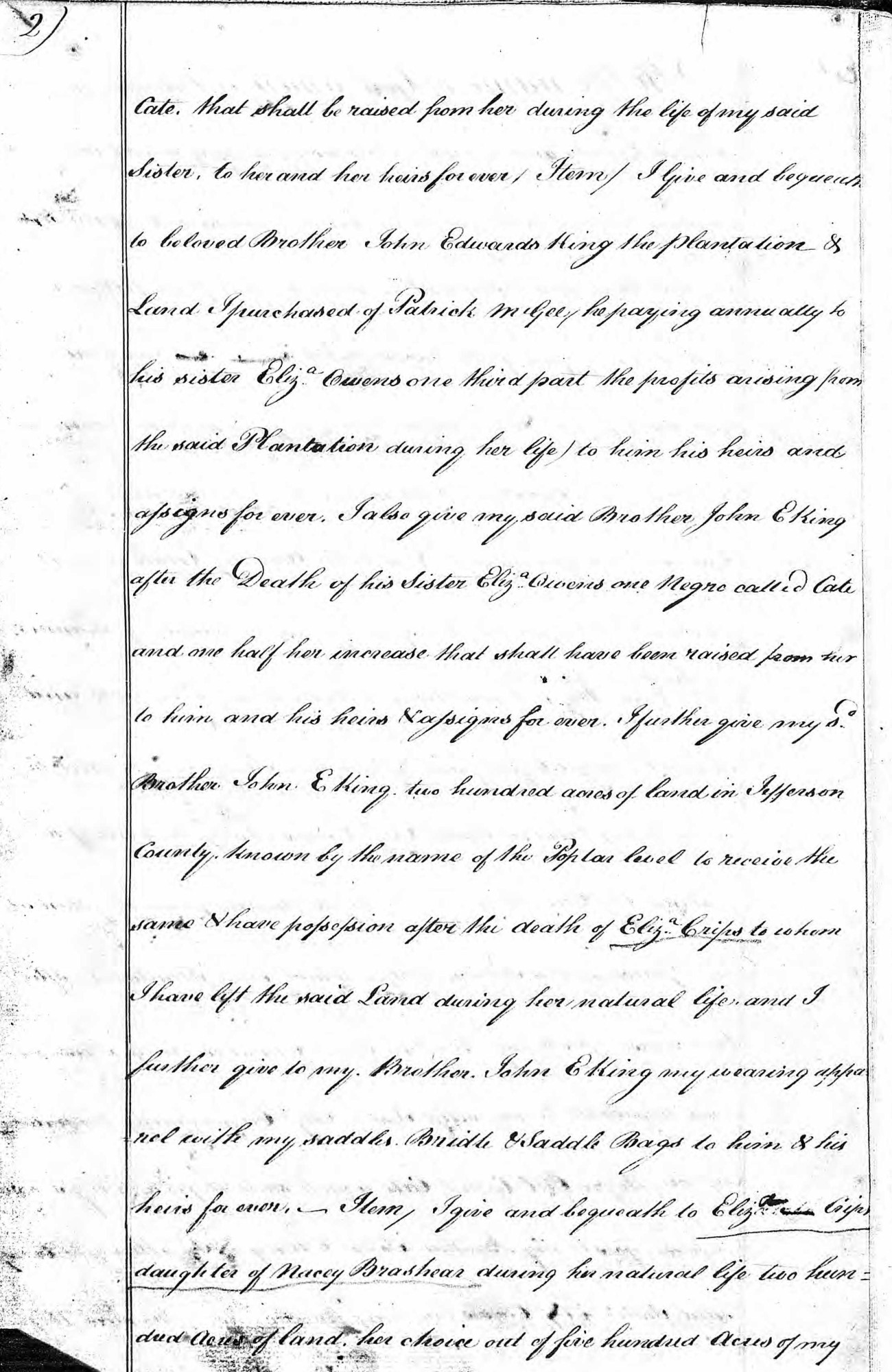 Cate, that shall be raised from her during the life of my said sister, to her and her heirs forever.

land in Jefferson County, known by the name of the Poplar Level on Floyd’s Fork, which said land at her death goes to my brother, John E. King.  I also give to the said Elizabeth Crips my mare called Jenix and three thousand weight of tobacco to her and her heirs and assigns forever.

Item.  My will and desire is that all the rest of my estate, real and personal, be equally divided between my beloved mother and my brothers William and Withers King and that my mother’s part at her decease go to my two brothers, William and Withers, to them, their heirs and assigns forever. 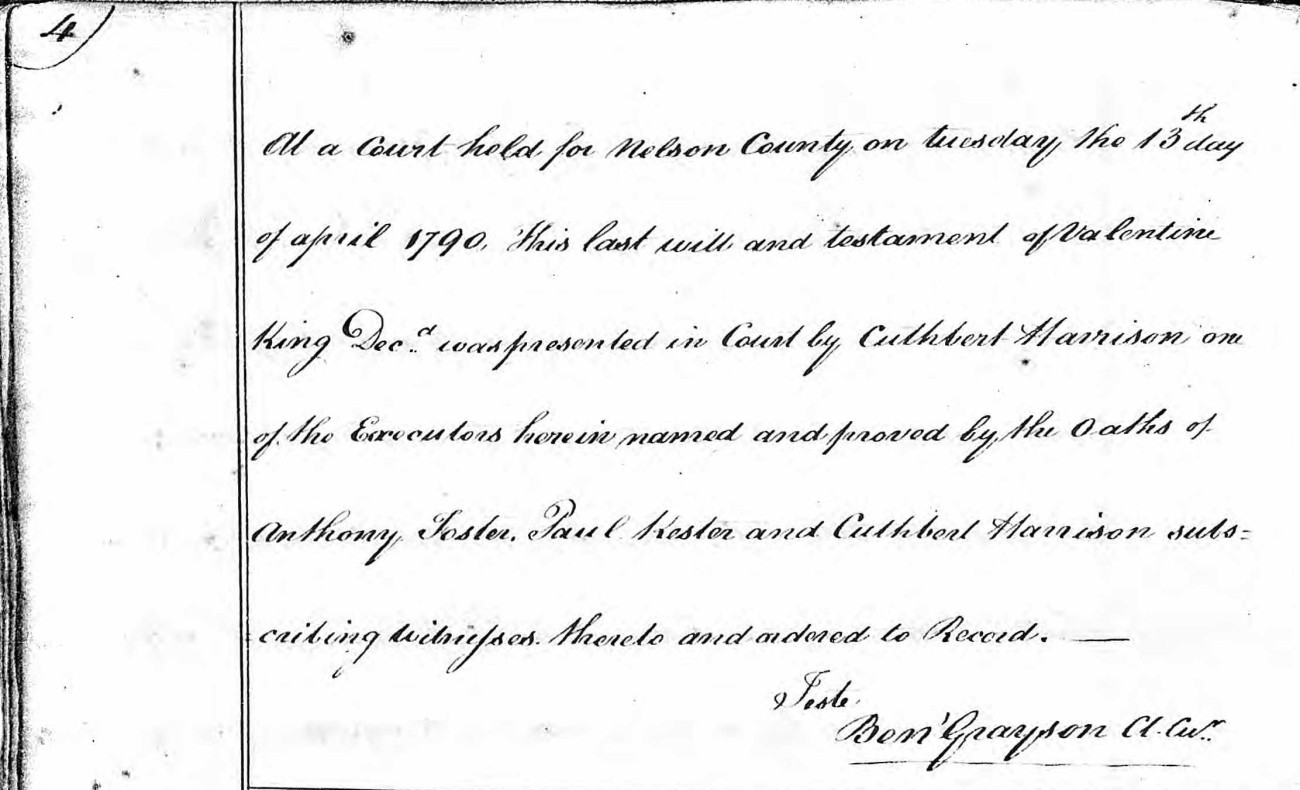 At a Court held for Nelson County on Tuesday the 13th day of April 1790.  This last will and testament of Valentine King, deceased, was presented in Court by Cuthbert Harrison, one of the Executors herein named and proved by the oaths of Anthony Foster, Paul Kester and Cuthbert Harrison, subscribing witnesses thereto and ordered to record.