1803 Will of Mary Luckett of Washington County

By Kentucky Kindred Genealogical Research on March 6, 2018 • ( Leave a comment )

Mary Luckett was a very recent immigrant to Washington County, Kentucky, when she died there in the spring of 1803.  Her husband, Thomas Hussey Luckett, died in Port Tobacco, Charles County, Maryland, in 1797 – she came to Kentucky after that date.  Mary’s children are listed – most of the girls with their married names.  I checked marriage records for Washington County, but could find none of these names, leading me to believe they married in Maryland.  Henry Luckett, the youngest, married Elizabeth Beaven in Washington County 17 June 1805.

I find it very interesting that she sends her executor to Maryland, to remove a Negro boy from the man she sold him to – Osborn Ecton.  Was he cruel to this young slave?

Rev. Stephen Theodore Badin is the priest mentioned in her will, to receive five pounds.  He was born in Orleans, France, July 17, 1768, and did much to minister to the Catholics in Kentucky during the early days of the state.

Also remember that Marion County was still a part of Washington County at this time.  I believe it is in that area that the Luckett’s lived.

In the name of God, amen.  I, Mary Luckett, of Washington County and state of Kentucky, being weak of body, but sound and perfect mind and memory, recommending my soul to almighty God, who gave it, and my body to the earth to be decently buried at the discretion of my children, doth give and bequeath

My personal and real estate in the following manner and form, to wit.  It is my will and desire that my Executor shall have a sum of money arising from the sale of my property, sufficient to pay him and bear his expenses to the state of Maryland, and also money, if any shall be required, for the use of removing a Negro boy, called Joseph, of the possession of Osborn Ecton, which boy was sold to said Ecton by me.  It is my will and desire that Elizabeth Cheatham, Benjamin Luckett, Thomas Luckett, Priscilla Roby, Sarah Simms, Ann Mellon, Verlinda Roby, Elizabeth Luckett and Henry Luckett, my beloved children, shall have an equal proportion of my real and personal estate after paying all my just debts and expending the sum of five pounds with the Rev. S. T. Badin, and lastly, I constitute and appoint Hezekiah Luckett, the sole Executor of this my last will and testament, revoking any other will or wills heretofore made by me.  In testimony whereof I have set my hand and seal this twentieth day of April eighteen hundred and three.

Singed, sealed and delivered by Mary Luckett as her last will and testament in the 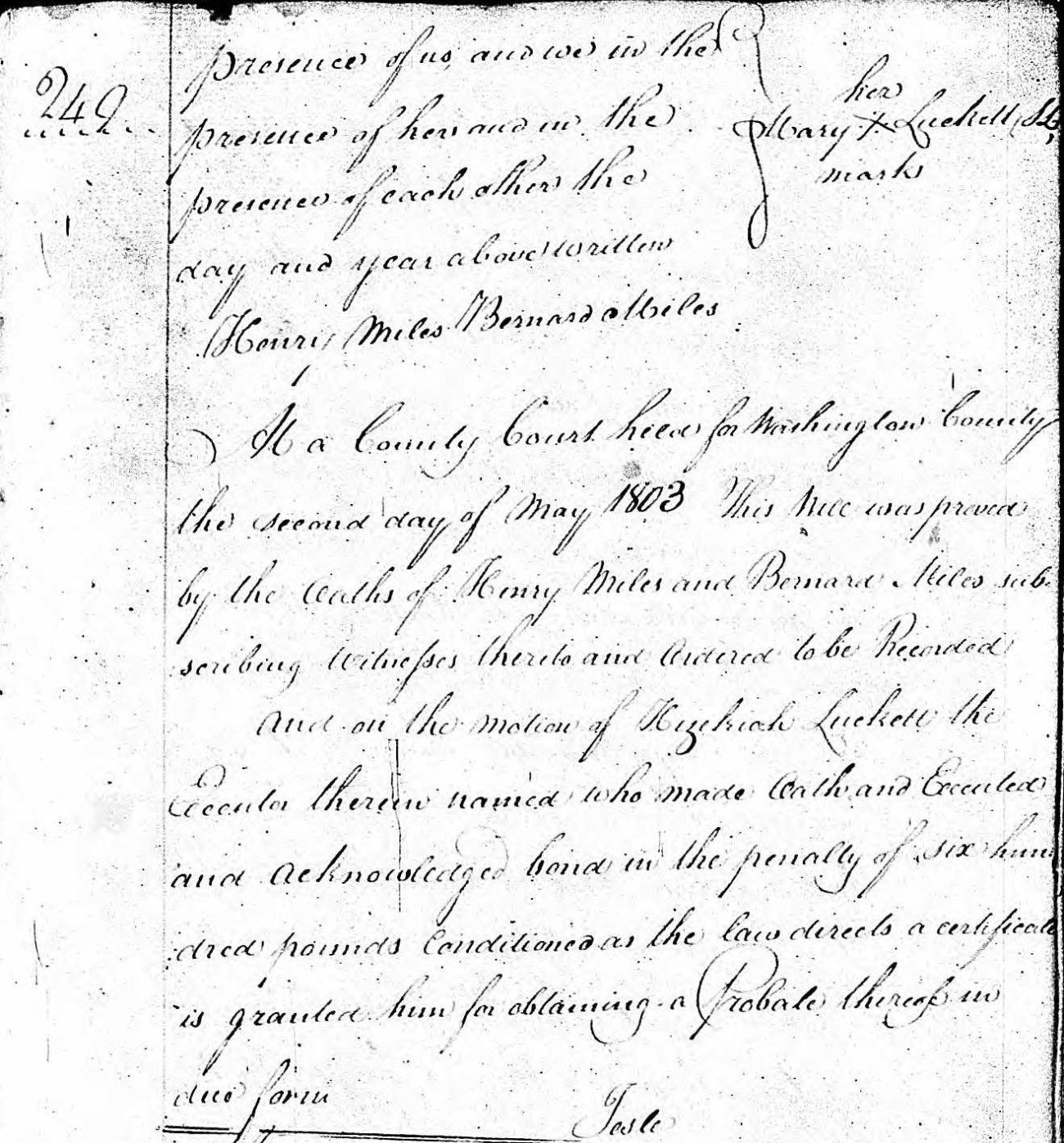 At a County Court held for Washington County the second day of May 1803.  This will was proved by the oaths of Henry Miles and Bernard Miles, subscribing witnesses thereto and ordered to be recorded.

And on the motion of Hezekiah Luckett, the Executor therein named who made oath and executed and acknowledged bond in the penalty of six hundred pounds conditioned as the law directs, a certificate is granted him for obtaining a probate thereof in due form.

Thomas Luckett, son of Samuel and Anne Luckett, was born about 1720, in Port Tobacco Parish, Charles County, Maryland.  His wife was Mary, who shared in the will of her mother Sarah Griffin, of Charles County, during 1796. From the ages and marriages of his children, it can be concluded that Thomas wedded somewhat late in life.

Thomas Luckett maintained his seat in Upper Port Tobacco Hundred, where he was a tax payer in 1783, with the following tracts – ‘Quick Dispatch’ of 15 acres with one good dwelling; ‘Semmes’ Support’ of 40 acres; ‘No Dispute’ of 48 acres with one good dwelling; and ‘Luckett’s Outlet’ of 24 acres.  These tracts were acquired during the Revolutionary War, inasmuch as up to the year 1774 Thomas Luckett paid no quit rents to the Lord Proprietor.

In 1778 Thomas Luckett took the Oath of Allegiance and Fidelity to the State of Maryland in Charles County, his signature appearing on the list of ‘His Worshipful Robert Young Returns’.

He died intestate in Charles County.  His widow Mary was issued letters of administration, while the inventory of his personal estate, taken in April 1797, showed property given to his five children at the time of marriage, but since returned to the estate.  The final account was rendered April 15, 1797, by this widow, and distributed to her and nine unnamed children.  John Griffin and Thomas Luckett were bondsmen.