1788 Will of Francis Lucas Jacoby

Francis Lucas Jacoby, born in Germany, came to America about 1764 via England.  Married Frederica Lotspeich, a fellow passenger, in 1764 in London.  The family lived in Culpeper County, Virginia, during the Revolutionary War, in which Francis was part of the militia.  Moved to Kentucky after 1783.

In the name of God, amen.  I, Francis Lucas Jacoby, of the County of Bourbon and State of Virginia, of sound sense and memory, do make, constitute and ordain this my last will and testament, and hereby revoke all and every will heretofore by me made or ordered to be made.  I first desire that all the debts which I justly owe to all men be faithfully paid agreed to contract.  I secondly dispose of my worldly property, both real and personal,in the following manner.  I leave in possession of my beloved wife, Frederica, during her real life, the plantation whereon I now live, with the appurtenances thereon for the purpose of raising my small children.

Item.  It is my will that my hereafter mentioned shall proceed to have all my personal estate, valued immediately after my death.  And after giving my wife her first choice of a part equal to that the estimate be equally made and that each of my following children as respectively come of age and choose shall of my Executor hereafter named the sum such valuation shall amount to provided that no such demand during the natural lifetime of my wife as it is my will that all the property she is to keep for the purpose of raising my small children, be continued in her possession, disposal at will.

Item.  It is my will and desire that my lands be equally as near as may be in value among all my children, viz., Katrina, Elizabeth, 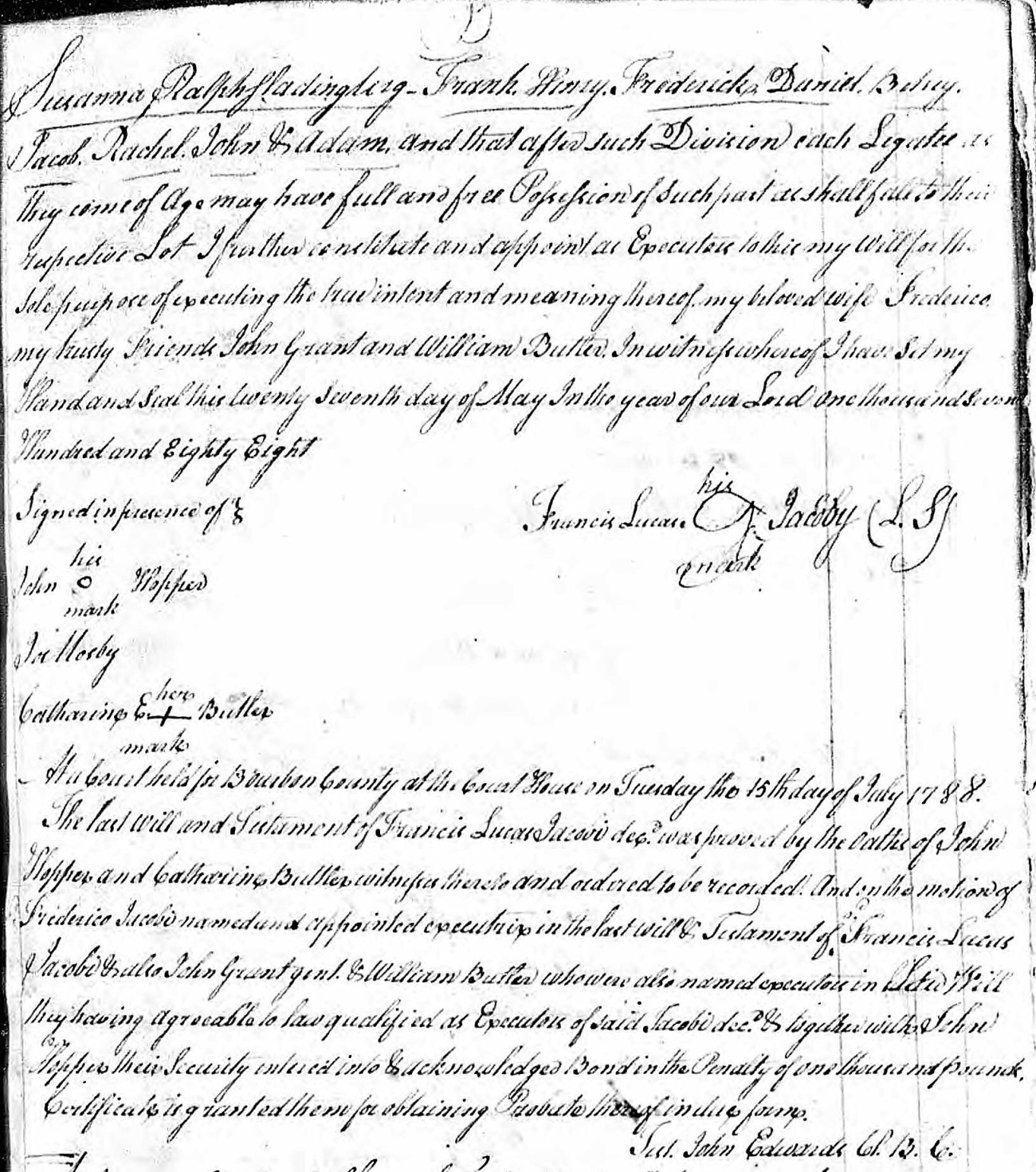 Susanna, Ralph of ?, Frank, Henry, Frederick, Daniel, Betsey, Jacob, Rachel, John and Adam, and that after such division each legatee as they come of age may have full and free possession of such part as shall fall to their respective lot.  I further constitute and appoint as Executor, to this my will for the sole purpose of executing the true intent and meaning thereof, my beloved wife, Frederica, my trusty friends, John Grant and William Butler.  In witness whereof I have set my hand and seal this twenty-seventh day of May in the year of our Lord one thousand seven hundred and eighty-eight.

At a Court held for Bourbon County at the Courthouse on Tuesday the 15th day of July 1788.

The last will and testament of Francis Lucas Jacoby, deceased, was proved by the oaths of John Hopper and Catherine Butler, witnesses thereto and ordered to be recorded.  And on the motion of Frederica Jacoby, named and appointed executrix in the last will and testament of Francis Lucas Jacoby, and also John Grant, gentleman, and William Butler, who were also named executors in said will, they having agreeable to law qualified as Executors of said Jacoby, deceased, and together with John Hopper, their security, entered into and acknowledged bond in the penalty of one thousand pounds.  Certificate is granted them for obtaining Probate thereof in due form.