The Thomas and Abell families lived in the part of Washington County know as Calvary, that in 1834 became Marion County.  It is very likely they were buried at Holy Name of Mary Church in that small town.   When I photographed the gravestones in this cemetery I did not find a stone for them, but as this is a very old cemetery many of the earliest stones are either destroyed or no longer readable. 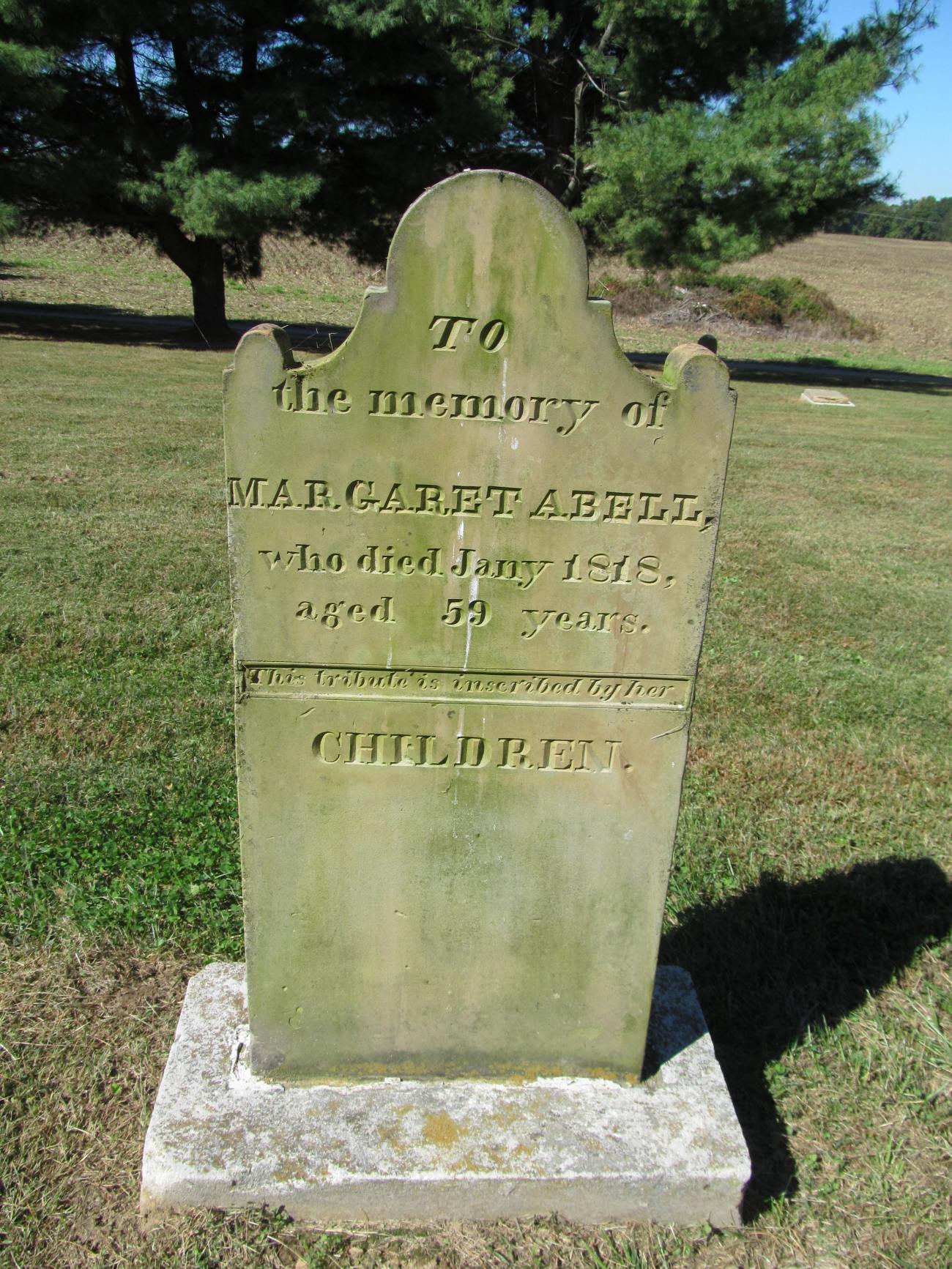 To the memory of Margaret Abell who died January 1818, aged 59 years.  This tribute is inscribed by her children.  St. Thomas Catholic Cemetery, Nelson Count, Kentucky.

We know from the information below that Robert Abell gave his permission for his daughter Ann to marry.  Did he make a trip back to Maryland where he died four years later?

We find the answer to our question in The Centenary of Catholicity in Kentucky by Hon. Ben J. Webb.  In 1788 Robert Abell emigrated with his family to Kentucky and settled on lands bordering the Rolling Fork River (in the Calvary area of Marion County).  His father was Samuel Abell, who had been high sheriff of St. Mary’s County, Maryland, and his mother, Ellen O’Brien.  Robert’s wife was Margaret Mills.  Robert and Margaret were the parents of ten children, seven sons and three daughters:  Samuel, Jesse, James, Robert, Ignatius, Benjamin, John, Mary, Ellen and Janet [Janet Ann].  As proposed, it is stated in this book that Robert Abell visited Maryland in 1802, where he was taken ill and died.  It also mentions that Margaret was buried at St. Thomas in Nelson County.

Benedict Joseph ‘Bennett’ Thomas was the son of Mark Thomas and Elizabeth Abell, born August 4, 1772, in St. Mary’s County, Maryland, died August 15, 1840, at Calvary, Marion County, Kentucky.  Bennett and Ann are most likely buried in Holy Name of Mary Cemetery, although I found no stone for them.

Know all men by these presents that we, Bennett Thomas and Richard Fenwick, are held and firmly bound unto his Excellency, the governor of Kentucky, in the sum of fifty pounds current money, to the payment of which well and truly to be made to the said governor and his successors.  We bind ourselves, our heirs, jointly and severally, firmly by these presents, sealed with our seals and dated this 29th day of May 1798.

The condition of the above obligation is such that whereas there is a marriage shortly intended between the above bound Bennett Thomas and Ann Abell, for which a license has issued.  Now, if there be no lawful cause to obstruct the said marriage then this obligation to be void or else to remain in full force.

Sir, this is to inform you that I have given my approbation for my daughter Ann to be married to Mr. Bennett Thomas, and this will be a sufficient justification for a license to issue.

I am with respect yours,