By Kentucky Kindred Genealogical Research on November 21, 2019 • ( Leave a comment )

My objective today was to show how easy it is to follow an ancestor in small-town newspapers.  A newspaper of this kind has room to add details of the normal activities of its citizens that a larger newspaper does not.  Visiting friends and relatives, club and social activities, home and business purchases, weddings and births are generally discussed in these papers.  My chosen town was Maysville, my subject, W. L. Schatzmann and his wife, Anna, buried in the Maysville Cemetery.  My heart was heavy by the end of my search, but I felt life is not always fair and easy, and perhaps I needed to share Mr. Schatzmann’s story even though the outcome was not what I expected.  Only information from newspapers, and the photo I took of William Schatzmann’s gravestone, is used in this story.

In some of the earlier newspapers we find that William Schatzmann purchased a house and lot on the north side of Second Street, between Wall and Vine Alley, from Percy L. Mannen for $2,050.

William was a member of the German Relief Society, a support group for German immigrants from Germany, Austria and Switzerland, and people with German ancestry.  At various times he was on the Sick Committee and was a Banner Carrier.

Other articles give him, among others, a license to retail spirituous, vinous and malt liquors.  William also received permits for building an addition and remodeling his home.  He purchased property at Fifth Street.

February 23, 1898, was the happy news that a fine son was born to William L. and Anna Schatzmann.

At one time William operated a coffeehouse.  In 1900 he and other businesses gave money to fund the Tobacco Fair held that year.

An interesting article in 1901 gives more information about William.  This was on a page with articles about different businesses located in the city of Maysville.  He came to Maysville in 1866, when but six years of age, and entered the saloon business in 1889, now located at No. 6 East Second Street, ‘where he will be pleased to serve his choice ales, wines, liquors and cigars.  Mr. W. L. Schatzmann is courteous, honest and entertaining and all those wishing to enjoy their beverages should pay him a visit.

Later in that year William opened a grocery at the old Ryder’s grocery on West Second Street.  And in 1903 was granted a license for a saloon 16 No. 222 Market Street.  There were notices of family members visiting the Schatzmann family and their visits to others.

August 28, 1904, Tillie Schatzmann, daughter of William and Anna, became the bride of Mr. John W. Sauer.  The following announcement was in the paper.

At 2:30 o’clock last afternoon at Ludlow occurred the marriage of Miss Tillie Schatzmann of this city and Mr. John W. Sauer of Lexington.  Miss Schatzmann has for a short time been on a visit to relatives in Lexington.  She is the handsome daughter of Mr. and Mrs. W. L. Schatzmann of West Second Street, popular in a large circle of friends in this city.  Mr. Sauer is a brother of Mrs. J. B. Orr of East Thirds Street, and is very well known here.  The Ledger, with their many friends, wishes them a very happy journey through life.

Now the unnerving ending of this happy family.

William L. Schatzmann Missing from His Home in West Second

Mr. William L. Schatzmann is mysteriously missing this morning from his home in West Second Street.  He arose at an early hour, partially dressed himself and left the house, since which time he has not been seen or heard.  Before leaving the house, he took his watch and money from his pockets, taking nothing of any value with him.  It is feared by his family and friends that something has happened to him.

On the 14th of March, a longer story about the disappearance of Mr. Schatzmann is in The Public Ledger:

Nothing Heard of Him

The mysterious disappearance of Mr. William L. Schatzmann from his home in West Second Street yesterday morning, of which The Ledger made mention, remains insolvable.

There were no developments during the day, notwithstanding the Police were engaged all day in a diligent search – to give hope for his safety or abate the apprehension his relatives and friends entertain.

There was no earthly reason for the man committing suicide, as many now are prone to believe.

He was an exceedingly quiet man of genial temperament and well-liked by his acquaintances.

He had a happy home circle and was pleasantly situated.

It has been stated, however, that his business ventures for the past two years have been the reverse of success, and that in the sale of his saloon last Saturday, he tangled himself with two buyers, and this is said to have worried him, and altogether may have unbalanced his mind.

He had practically rented the Diener House in Market Street opposite the Central Hotel and was to have taken possession Monday Morning.

In leaving his home he passed out the rear door, leaving it ajar; then through a gate, which he closed and fastened by placing a large stone against it; he then wended his way to the river, which, owing to the high stage of water, was but a short distance from his residence, and here all trace is lost of the missing husband and father.

The fact that he was not fully dressed and that he left his money and watch behind is evidence sufficient to dispel the theory that he has gone to his sister in Cincinnati.

In the sale transaction Mr. Dersch gave him a check for $590 – $10 having been paid previously to bind the bargain – which is missing, and he may have it on his person.

A laborer along the line of the C. and O. in the West End informed Policeman Senteney that he saw a man walking down the track early in the morning, and the description he gave of him was exactly that of Mr. Schatzmann.

In all similar disappearances the parties have been see – at least, said to have been – in various places, but in the end, when found, were dead.

While it is sincerely hoped the absent man may turn up all right, his action is almost conclusive evidence that he has made away with himself.

The Wyandotte Tribe No. 3, I. O. R. M., (Improved Order of Red Men – a fraternal order whose rituals and regalia are modeled after those assumed by white men of the pre-revolutionary era to be used by Native Americans, begun by the Sons of Liberty when they disguised themselves as Mohawk Indians during the Boston Tea Party.  A German-speaking order came into being in 1850.) offered a cash reward for the recovery of the body of William L. Schatzmann.

Wyandotte Tribe No. 3, I.O.R.M., has decided to offer a liberal cash reward for the recovery of the body of William L. Schatzmann, who is supposed to have suicided by drowning in the river last Monday morning.  Descriptive circulars are to be printed and distributed in the various towns below, with the hope of finding the unfortunate man, dead or alive.

From the Tuesday, May 16th issue of The Public Ledger, we learn the body of William L. Schatzmann, was taken from the Ohio River at Cincinnati.  At long last the wait was over, even though the news was not the outcome William’s family and friends wanted to hear.

Corpse Taken from River at Cincinnati is Maysville Man

The finding of the body of Mr. William L. Schatzmann in the river at Cincinnati Sunday morning has solved a mystery and relieved the family and relatives of a great strain that has continued for nine weeks.

The manner of his disappearance was told in these columns at the time, and the forebodings entertained of his having committed suicide by drowning in the Ohio River have been verified.

The body was identified yesterday at the Cincinnati Morgue by his sister, Mrs. James Hopgood, of 1557 Holman Street, Covington, who identified him by his clothes and a pair of Redmens buttons.

This is something of a coincidence in the case.

The river at the time he took the fatal plunge was almost, if not exactly, the same gauge – 43 feet.

The reward of $25 offered by Wyandotte Tribe No. 3, I.O.R.M., of this city will be paid to the man who recovered the body.

Mr. John Brodt, brother-in-law of the deceased, left yesterday to bring his remains to this city and arrived here last night on the C. and O. train at 10:42.

May 16th, two days before the funeral, a notice was put in the paper that all members of the German Relief Society are requested to meet at the Hall that evening at 7:30 to make arrangements to attend the funeral of Brother W. L. Schatzmann at 10 o’clock tomorrow morning. 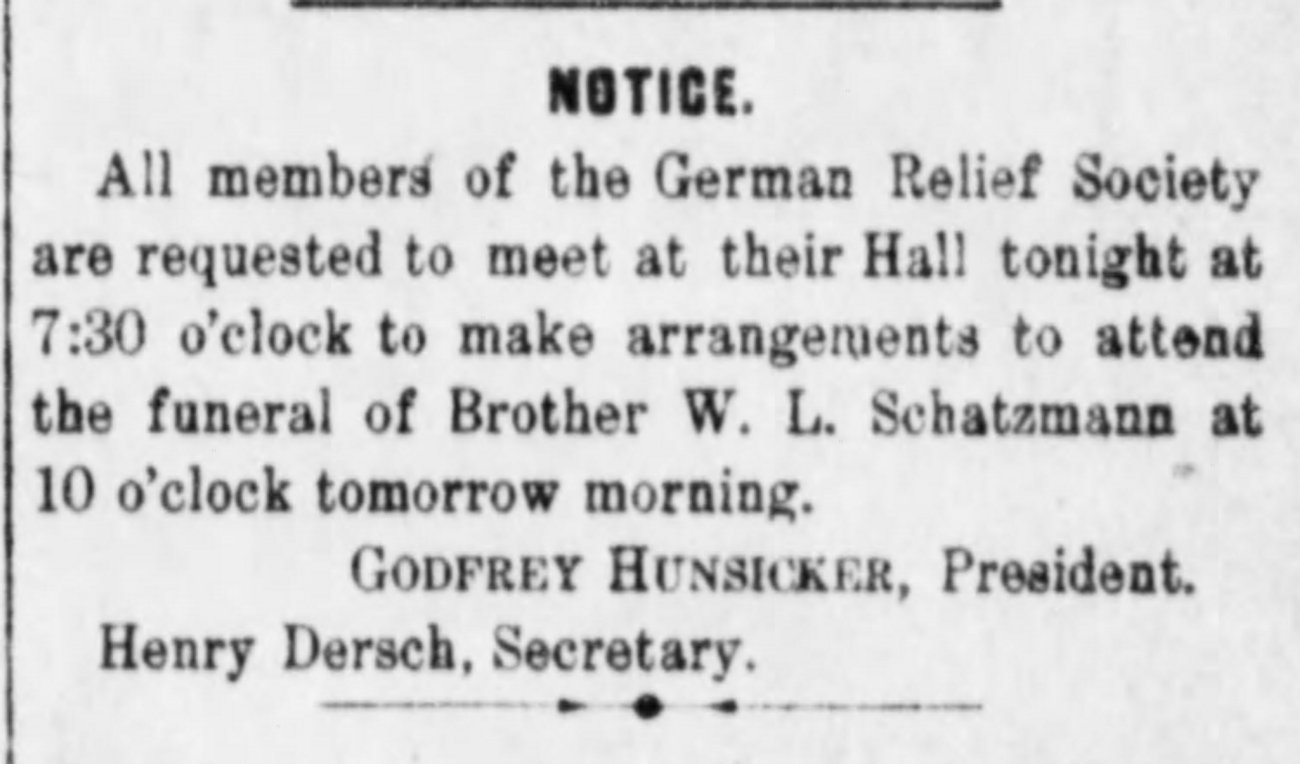 Finally, the May 18, 1905, issue of The Public Ledger gave the following funeral announcement:

The funeral of Mr. W. L. Schatzmann yesterday morning was under the auspices of the Redmen and German Relief Society and was largely attended by members of the Orders.  Many beautiful floral tributes were laid upon his coffin by loving relatives and friends. 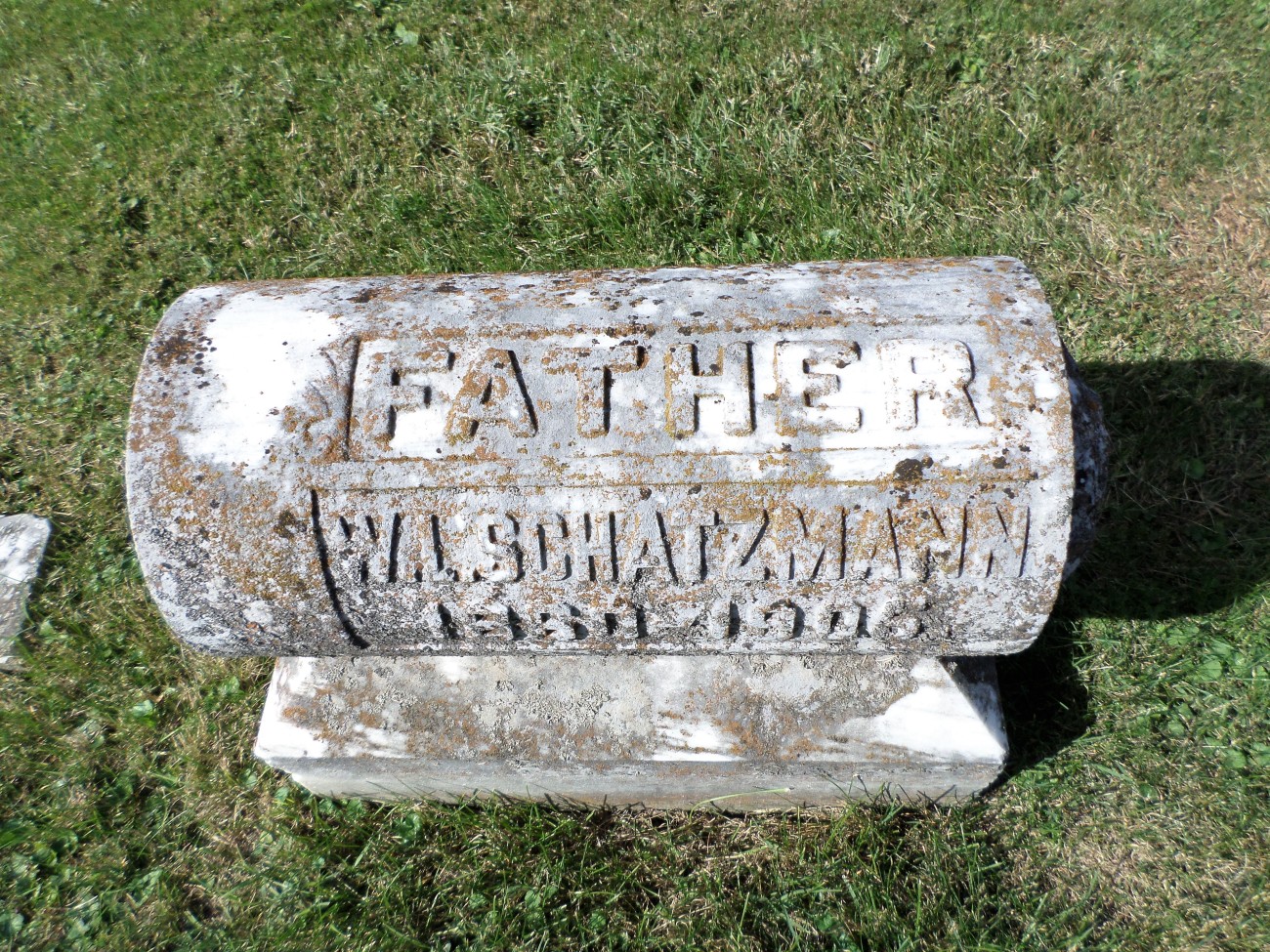